The change in Lego expressions to somewhat grimmer visages has not harmed your children.  An excerpt:


... New Zealand researchers demonstrated that LEGO faces have become much more diverse in the past 35 years, but the finding that got the most attention is that LEGO is making more angry-looking minifigures than ever before, to a point where the proportion of angry faces rivals that of happy ones. But, contrary to what you might have read, the study did not look into the effect that these facial expressions are having on children and their emotional development. In fact, the study did not involve children at all. ...
“Around 20 percent of reporters read the study beforehand,” estimates Bartneck. “The bad ones just copied what everybody else was writing.” This is unfortunate, because the findings of this study are interesting in their own right. 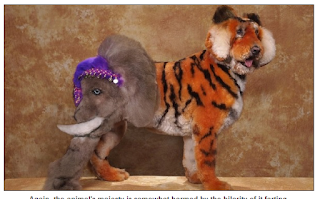 
2.) When interviewing for a job, tell the editor how you love to report.
How your passion is gathering information. Do not mention how you want to be a writer, use the word "prose," or that deep down you have a sinking suspicion you are the next Norman Mailer.


"The Sexy Lamp Test. If you can remove a female character, replace her w/ a sexy lamp & your story still works, you’re a hack." - @kellysue [Ed Yong]


Writing advice 3: self-publishers, let us know who you are.


I stumbled across the title Mad City Eats: Food Adventures in Madison, Wisconsin

, by Adam Vincent Powell. ...I'm always vaguely curious who these local authors are (if they are truly "local") and what they're out there doing.But when I brought this book home, I was disappointed. I have no idea who this Adam Vincent Powell* is, and the book includes no introduction, preface, or really any kind of clue to enlighten me. The book literally just launches into its subject matter,

Writing advice 4: hard to excerpt from this one.  Two points in brief. a) be careful when your views change as you write a book so that the conclusion matches your introduction and b) be sure that people can recognize your voice from those of imagined critics.

Amazon has licences to allow fan-fiction to be sold on Kindle. Win (fan writers) - Win (Amazon) - Win (original writers).  Time for some Jedi knights to land in the Well of Souls (I'm reading some old Chalker now).

Hirschman felt that creative leaps were seldom intended but forced.  People just thought the project would be easier, then had to finish the damn thing.


Hence, the only way in which we can bring our creative resources fully into play is by misjudging the nature of the task, by presenting it to ourselves as more routine, simple, undemanding of genuine creativity than it will turn out to be.


My son and I will soon be building an awesome robot!


Designed to be enjoyed by children with an adult on hand, Welcome to Your Awesome Robot provides perfect material for a fun family activity day or a kids workshop. Viviane Schwarz has illustrated hilarious comics throughout the book to explain the blueprint instruction pages, so this is just as much a story as it is a workbook.

Dim the lights to be creative.


“Darkness increases freedom from constraints, which in turn promotes creativity,” report Anna Steidle of the University of Stuttgart and Lioba Werth of the University of Hohenheim. A dimly lit environment, they explain in the Journal of Environmental Psychology, “elicits a feeling of freedom, self-determination, and reduced inhibition,” all of which encourage innovative thinking.
Steidle and Werth describe six experiments which provide evidence for their thesis. The key one featured 114 German undergraduates, who were seated in groups of two or three in a small room designed to simulate an office.

Posted by Surprises Aplenty at 9:01 AM