By James Altucher.  The link is to his website with the tips in text but below is a graphic he posted to Quora. 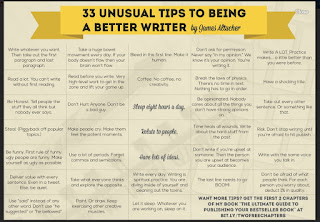 His genre -entrepreneurship and self help - doesn't appeal to me but he sure has a lot of books on list at Amazon.

I have only a few textbook(let)s to my name so even if I say the tips below work for me, that isn't much of a reference.  Let's see what I can add:

34) Choose to be optimistic or positive.  You can write about whatever subject you want and even write about negative things but feel positive as you write.  In the Stanford class on creativity I took, I disagreed with the professor on several points, but chose to accept them and have fun with the class.  It was a good class, I learned a lot and had fun writing the brainstorming ideas.

35) Go somewhere else to write.  I know full time writers tend to have designated offices and work nine to five, but there's no reason not to try different coffeeshops or libraries or mountaintop tables. 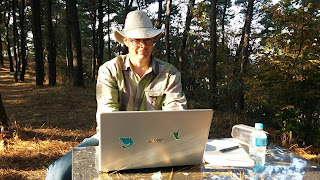 Huh. I seem to recall an article on Rowling that stated she wrote in coffee shops because a cup of coffee was cheaper than heating her apartment.  Not so, says Wikipedia:


She wrote in many cafés, especially Nicolson's Café (owned by her brother-in-law, Roger Moore),[53][54] and the Elephant House;[55] wherever she could get Jessica to fall asleep.[26][56] In a 2001 BBC interview, Rowling denied the rumour that she wrote in local cafés to escape from her unheated flat, pointing out that it had heating. One of the reasons she wrote in cafés was that taking her baby out for a walk was the best way to make her fall asleep.[56]

My understanding is Rowling's coffee shop is now such a tourist attraction that getting work done in it is unlikely.  I'm sure Edinburgh has other coffee shops.  I plan to do some writing at a local Eco centre - the Eulsookdo Nakdong Eco Centre (link appears to work only in Internet Explorer).

36) Only one window open.  Research at one time, write at another. (Exactly what I am not doing while writing this blog post.)
Posted by Surprises Aplenty at 6:32 AM