Step away from that child!


"Child prodigies rarely become adult geniuses who change the world. We assume that they must lack the social and emotional skills to function in society. When you look at the evidence, though, this explanation doesn't suffice: Less than a quarter of gifted children suffer from social and emotional problems. A vast majority are well adjusted - as winning at a cocktail party as in the spelling bee.
What holds them back is that they don't learn to be original. They strive to eearn the approval of their parents and the admiration of their teachers. But as they perform in Carnegie Hall and become chess champions, something unexpected happens; practice makes perfect, but it doesn't make new."


The gifted learn to play magnificent Mozart melodies, but rarely compose their own original scores. They focus their energy on consuming existing scientific knowledge, not producing new insights. They conform to codified rules, rather than inventing their own.  Research suggests that the most creative children are the least likely to become the teacher's pet, and in response, many learn to keep their original ideas to themselves.  In the language of the critic William Deresiewicz, they become the excellent sheep.

The final excerpt as a screen shot (click to embiggen): 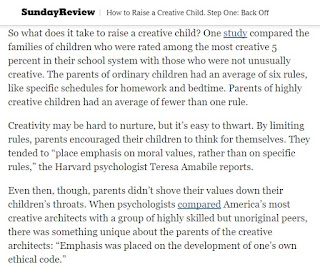 ---
I get the feeling that this is a necessary but insufficient step to create a creative child.  My parents allowed me to follow my heart so far as sports and hobbies were concerned and I mostly became lazy.  On the other hand, when I finally chose competitive swimming, I really chose the sport and dug in and excelled.  My love of human-powered travel began in childhood and continues to this day.  The baseball and hockey they pushed on me are still sports I have trouble even watching.

Posted by Surprises Aplenty at 1:38 AM