This past week, the age old discussion of what science fairs actually accomplish was revived by some noted science communicators.
Let me start the discussion here with some images:
From the Huff Po: 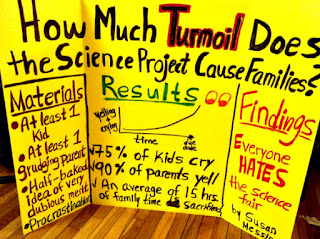 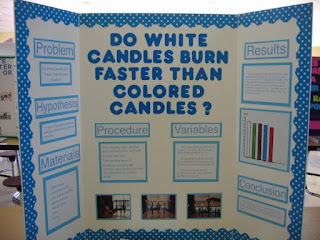 And a Bizarro comic via Super Science Project: 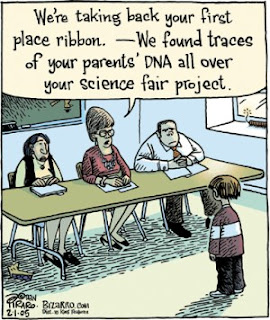 ---
Now, to the meat: Carl Zimmer's report of his daughter's science fair project:


The experience turned out well, but it also left me queasy. The only reason Veronica was able to carry out her experiment was that I had the flexibility to spend hours struggling through paperwork, and because I had a social network of scientists I’ve developed as a science writer. This was an exercise in privilege.
If Veronica had been the daughter of a single parent with a couple jobs and no connections to the world of science — if she had been like a lot of American kids, in other words — her idea would have gone up in smoke. She might not have even bothered thinking about the science fair at all.


Meghan Shea [a competitor in several fairs]:
There’s no question that many students don’t have the resources I had, making it difficult or impossible for them to participate in science fairs. But the idea of science fairs is good, even though their execution may be flawed.
...
While I idolized scientists throughout high school, my biggest role models were science fair winners. I would never have heard about their work if it hadn’t been rewarded. Having science competitions and events like the White House Science Fair places a higher value on student science research, which I believe has encouraged schools to include more accessible science projects and inquiry into their curricula.

And PZ Myers, a judge in several fairs:


You’d go through the exhibits with a partner and a checklist, and, for instance, you’d see some kid who’d put together something with duct tape and string and a couple of sad looking plants next to a kid who’d had connections at UPenn and had used a sequencer, a confocal microscope, and a battery of fluorescent probes to put together a gigantic shiny display of images so bright they glistened. Guess who’d win? And it was sad because sometimes the kid with the simple experiment done with homemade gadgets had been more creative and curious and true to the spirit of the science than the kid who’d been fed some high-tech gadgetry and pooped out an answer

A solution from Myers:


I would also assemble some measurement devices: rulers, thermometers, light meters, pH paper, protractors, hand lenses.
I’d have a list of basic supplies: simple chemicals, magnets, 9v batteries, small invertebrates (fruit flies, for instance), seeds, etc.
I would give the students a list of all of these things, and tell them to design an experiment within the limitations of their supplies. Note that electron microscopes and NMR spectrometers are not available. They’d be allowed to purchase some additional special purpose supplies, but with a limit of $10 (too much? OK, $5) — so, for instance, if they wanted to measure the diameter of soap bubbles produced by commercial dishwashing detergents, they’d be allowed to buy a couple of bottles. The whole point would be to keep everything simple and on a level playing field.

---
I included the Which candle burns longer, white or coloured? image to show an example of what could be tested.  The funny thing about infinity is that when you set a limit on it, you still have infinity.  Out of all the scientific experiments that could be done, limiting them to ones that fit within Myers's limits still allows you a lot of options.  It might further encourage/require students to focus more on the book learning part: the research, conclusions and applications discussion.  As a youth, I had a model rocket on a bike wheel fixed horizontally on a stick.  I put in an engine - rocket fuel from a hobby store - and won a prize.  I don't recall what I wrote or what I thought I was accomplishing.  It sure looked cool when we went outside as a class and I lit the rocket.  It spun about and eventually stopped and that was the end.  I. uh, hope I've grown since then.
Posted by Surprises Aplenty at 7:48 PM