I'm a big fan of Grant Snider's comic and will probably buy his book, if I don't win it in a giveaway. Here he talks about creativity (podcast). Another podcast; this one includes a giveaway. - You can play the podcast on the website or click the last link "Embrace the joy with our latest podcast" and you can download it there. 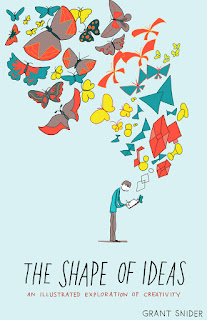 Figures as different as Charles Dickens, Henri Poincaré, and Ingmar Bergman, working in disparate fields in different times, all shared a passion for their work, a terrific ambition to succeed, and an almost superhuman capacity to focus. Yet when you look closely at their daily lives, they only spent a few hours a day doing what we would recognize as their most important work. The rest of the time, they were hiking mountains, taking naps, going on walks with friends, or just sitting and thinking. Their creativity and productivity, in other words, were not the result of endless hours of toil. Their towering creative achievements result from modest “working” hours.

Mason Currey wrote a book on the daily lives and routines of artists (Amazon) that I think covered similar territory. A Harvard Business review of the book:

As I read, I became convinced that for these geniuses, a routine was more than a luxury — it was essential to their work. As Currey puts it, “A solid routine fosters a well-worn groove for one’s mental energies and helps stave off the tyranny of moods.” And although the book itself is a delightful hodgepodge of trivia, not a how-to manual, I began to notice several common elements in the lives of the healthier geniuses (the ones who relied more on discipline than on, say, booze and Benzedrine) that allowed them to pursue the luxury of a productivity-enhancing routine:
A workspace with minimal distractions. Jane Austen asked that a certain squeaky hinge never be oiled, so that she always had a warning when someone was approaching the room where she wrote. William Faulkner, lacking a lock on his study door, just detached the doorknob and brought it into the room with him — something of which today’s cubicle worker can only dream. Mark Twain’s family knew better than to breach his study door — if they needed him, they’d blow a horn to draw him out. Graham Greene went even further, renting a secret office; only his wife knew the address or telephone number. Distracted more by the view out his window than interruptions, if N.C. Wyeth was having trouble focusing, he’d tape a piece of cardboard to his glasses as a sort of blinders.

---
A different version of ghost-written. Trish Vickers is blind and was working on a novel.  Her pen ran out of ink but she didn't know and 'wrote' another 26 pages before her son noticed the problem. Luckily forensic experts at a local police station volunteered their time and were able to recover the text. Above is the Boingboing summary link: here is the link to the original.


Not knowing what else to do, she and Simon called the police. To the Vickers’s surprise, officers at Dorset HQ volunteered to work during their breaks and free time, hoping to use their forensic tools to help. And, five months later, the police reported back with success: they recovered the never-written words. Vickers told a local newspaper that the pen she used to write the pages — even though there was no ink left in it — left behind a series of indentations: “I think they used a combination of various lights at different angles to see if they could get the impression made by my pen.”