I just visited a grammar for dummies site. Turns out I was using quotes and question marks correctly most of the time. Once I thought it looked weird, I removed the question mark - hey, if I write the word 'asked' then I probably don't also need a question mark, right? Then I considered a comma outside the end quote... Finally, it was easier to confirm my grammar then over think it with every occasion I had to type it.
From the very helpful site:


“How can you eat a tuna sandwich while hoisting a piano?” Betsy asked as she eyed his lunch.


1. Yesterday, I tweeted about writing a series, and several replies were along the lines of OMG IF AN EDITOR WANTS ME TO CHANGE MY BOOK, I'M OUT. So I'm going to talk about that today, because it's important for those who wish to be traditionally published. First: bad news...
— Delilah S. Dawson (@DelilahSDawson) November 19, 2017

The rest of the thread is interesting.
---
Another medieval city generator. Well, another generator, this may be the first medieval once. I like it!  As you swing the pointer around, the districts of the city display their usages. This one below had a temple but others did not. 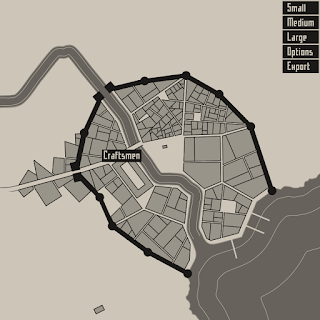 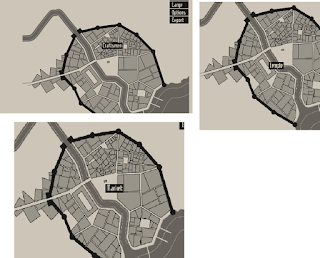 -
The generator also references 3-d toy town. I don't think you can make the two sync and see the same town in both views.

Posted by Surprises Aplenty at 4:59 AM