boundaries for creativity - and IQ/EQ/CQ

So many toys at the local E-Mart (a Korean Wal-mart I guess, although a little upscale) are labelled as encouraging IQ, EQ and even CQ.  I hardly know what the latter two are.

Alright, Wikipedia tells me that EQ is Emotional Quotient and CQ is Cultural Quotient.  Wow, those toys have some hard work ahead of them! 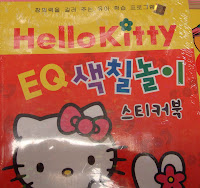 The examples I have today are all books, but I am sure I have seen other toys with similar labels.  I can understand the claim with Lego, for example, but others seem a little hincky.

-----------------------------------
It's a little late.  When putting this through my head, it seemed logical and clear.  Now; not so much.  I will clean this up later.  I have been trying to clear up in my mind the difference between creating or making something and creativity or imagination.  At the same time, I have been considering the intimidation factor of the 'white canvas'.  If you follow rules exactly and those rules are rigorous, you are simply repeating someone else's creative effort.  If there are no rules at all, it is hard to create anything at all.  I am not Christian, but in trying to imagine Great God Almighty just before starting his six days of creation, I wonder what I would do.  I also wonder why, with no one to share the creation.

I intend to follow some recipes closely and others loosely.  In both cases, I will have created something and learned something.
Posted by kwandongbrian at 7:57 AM