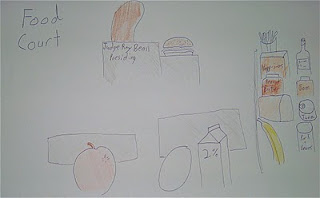 Now, I only need to learn how to draw.
---
Added later:
The Comics Curmudgeon voices his two cents.


...a brainstorm for a hit new reality show, Food Court, in which an ersatz jurist in a black robe would preside over faux trials in which, say, snacks that claim to be “healthy” would be cross-examined by medical experts who would prove that their sodium levels were off the charts and nutritive value was essentially nil. But then I saw the guy in the background in the vaguely Renaissance outfit, and I imagined Food Court, a historical comedy-drama in which a 15th century Italian prince rules over a Italian statelet and spends his time mediating the sometimes violent battles between rival restauranteurs.

Posted by Surprises Aplenty at 8:12 AM