In Korea, I had an iMac and used Ommwriter.  It is ironic because Korea is such a Microsoft stronghold, while Canada, my current location and where I am typing this on a PC, is a far more Apple-friendly place.  Anyway, I enjoyed using Ommwriter as it is so simple and distraction-free.  With earlier versions of Windows, I found similar comfort with Wordpad.  More on that later but this is I found on the download site today, May 24: 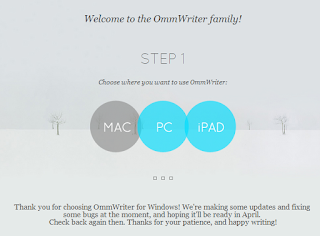 The relevant portion is on the bottom reads, "...hoping it'll be ready in April."

That complaint over, I'll probably get the paid version whenever it does come out.
---
Okay, Wordpad:  I enjoyed the simple format with the limited options: pictures didn't embed well but I could change the font and such.  It adapted to whatever size I opened it to without me playing with the margins - I like this feature because I could choose how much of the screen to dedicate to other documents.  The new Wordpad has too much stuff!

This page offers "ten free minimalist word processors"-and in the comments you can learn the difference between "processor" and "editor".

If you want the other end, uh, maximalist word processors, Scrivener seems well-loved.

Posted by Surprises Aplenty at 10:33 AM