Tolstoy and others on writing, plus teaching help

From War, Peace and Listicles:


The pursuit of that praise became a religion at the altar of which Tolstoy began to worship zealously as he came to believe that the artist’s goal was to teach mankind — a proposition at which he winces in hindsight, realizing that to teach requires to know what is meaningful to be taught:
I was considered an admirable artist and poet, and therefore it was very natural for me to adopt this theory. I, artist and poet, wrote and taught without myself knowing what. For this I was paid money; I had excellent food, lodging, women, and society; and I had fame, which showed that what I taught was very good.
This faith in the meaning of poetry and in the development of life was a religion, and I was one of its priests. To be its priest was very pleasant and profitable. And I lived a considerable time in this faith without doubting its validity.
But in a couple of years, he began to doubt this religion of authorship-as-sainthood and to notice its toxic hypocrisies, which both he and his circle of peers — his “personal micro-culture,” as William Gibson might say — embodied. And still, he found himself at once repelled by the duplicity of the acclaim he had worked so hard for and attracted to the status it bestowed upon him:


Quora has a two-fer.  First, How can we both clearly see the beauty of the world and clearly write it onto a page?


...one of the great myths surrounding gifted writers is that they are born with superior faculties to interpret their surrounding world, that their heightened senses allow them to see a magnified sense of beauty in each thing.
However, if we think about some of the finest writers of any era, the likes of Homer, Dante, Shakespeare and Joyce, on closer reading we find that they are equally capable of conveying the unrelenting ugliness of certain aspects of the world and human nature as well.
If you wish to see beauty, you must be prepared to absorb ugliness in all its forms as well; the best writers are capable on drawing on beauty, ugliness and everything in between. Sounds hard? In truth, it is achievable, and here are some ideas to help you:


1. Reduce Anxiety...
When teachers help students feel safe and in control of their potentials for success, they reduce affective filters and reduce the test-anxiety that may have lowered test performance in previous years. Gauge the assumptions students have about what is expected of them and how they will be assessed.

This one is a big one.  Whether for elementary or university age or even older, make people comfortable so they can share their ideas.
Strategy three was "Use choice boards".  This strategy has the least explanation, about two sentences, and they are written for an audience already familiar with the concept.
As I am not, I looked a little further.  The concept is to offer choices in how or show their knowledge or skill set.  Here is an example from Hillary Kiser's blog: 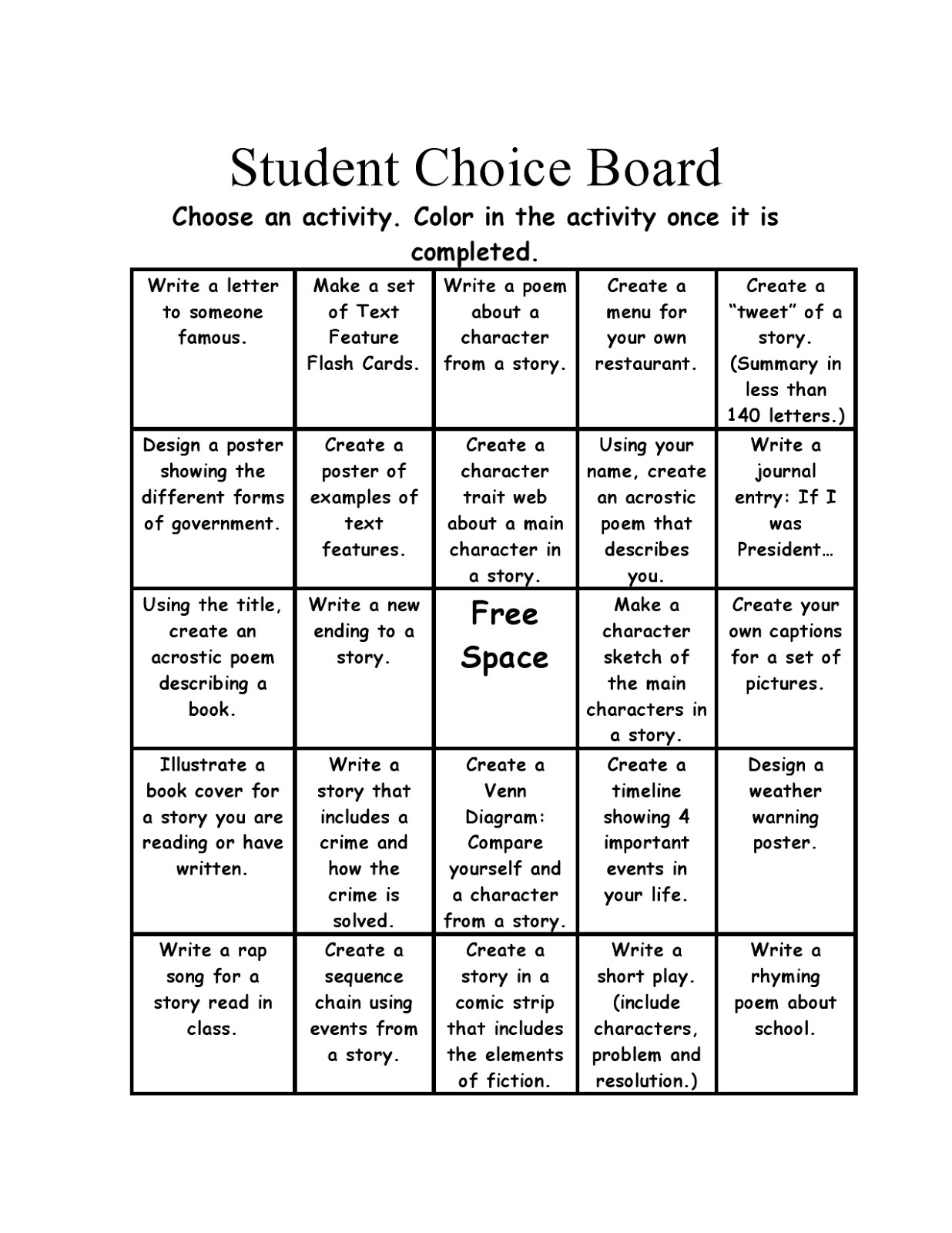 With less fanfare, my wonderfully skilled sister had similar offerings for her high school English classes.  To demonstrate understanding, students could write a standard essay, make a song, act out a scene or, well, I can't recall all the choices she gave her students.

My university students need to write five blog posts of 25 words each (this is an ESL class).  They can write about anything but I think that open-endedness scares them a little.  A choice board or similar listing of foci might help them.

Posted by Surprises Aplenty at 7:36 AM