Ever Blocks are the fullsize version of LEGO. 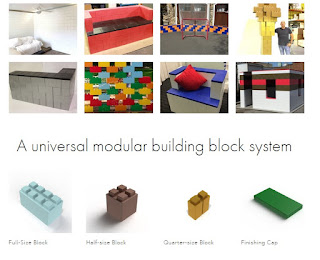 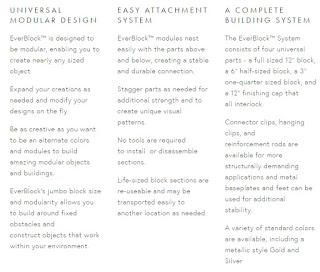 From Wired (via Boingboing):


EverBlocks assemble more or less like any other modular building blocks, but on a larger scale. But as the blocks get bigger, building with them gets more complicated. “When we first started, I envisioned that people would know instinctively how to build with them,” Rosan says.
That wasn’t the case. In miniature scale, it’s easy to gain perspective on how blocks fit together. At life-size scale, it gets more challenging. “People start to worry about stability,” he says. It’s no big deal if your 3-inch wall topples, but it is a problem if your 15-foot wall does. The key is to take lessons from Lego, and stack the blocks like bricks, staggering them so a brick covers the seam of the two below it. Each block also has at least one channel that allows power cables, reinforcing wooden dowels, or LED strips to snake through as a means of illuminating or stabilizing larger structures.

It is neat that the blocks come with channels for cables and the like.  I had imagined leaving a gap between blocks as communication points but they are already there.

I also like the idea of spaces for re-rod.  When I think about building with such materials (which happens surprisingly often), I plan buttresses as well.  Maybe they aren't necessary.

The limited variety of blocks appeals to this old-school LEGO architect.  The incredible number of options available with modern LEGO mostly confuses me.  I would have trouble designing something like this, for instance (but I do plan to buy it, at almost any cost, when it comes out). 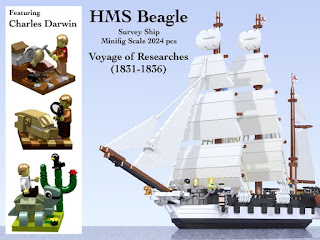 (A beautiful combination of my two obsessions!)
But what would I build?

Well, with the regular, small bricks, I made a house for my guinea pig that was sufficiently roomy and stylish for it.  Otherwise, I mostly made animals and other decorative pieces.

At the EverBlock website - topmost link - they have examples of shelves, walls and furniture. My favorite is the wall to hide behind in a waterfight - the brilliant color and gaps make it outdoorsy and fun.  The pure-white wall, very transportable, for use as a projection screen is nice.  But none jump out at me as LEGO-whimsical.

I guess I would build a castle-bed or-testing those wooden dowels for strength - an elephant bed with a large open space under the sleeping area.  EverBlock comes with a 3D building application but I found it challenging to use.  I tried to make my elephant bed but became frustrated in ways I don't remember getting with the actual blocks in my hands.

Anyway, I would like to make a colorful bookshelf or a desk system that fits my idiosyncrasies.  For example, I would like an 'L' or even 'U' shape.  I like the ones I see here with one side built into shelving.  With blocks, I should be easily able to convert to standing height and back as desired.

If it came with enough blocks, playing Creationary might be fun.

What would you build?
----
Now, if you built a subway - out of LEGO or Everblock, if you wish - where would it go?  Subway Adventure is a game by Increpare that offers its own answers to this questions. 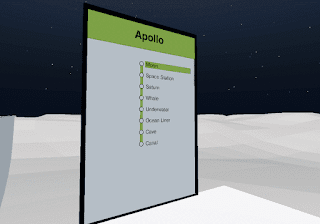 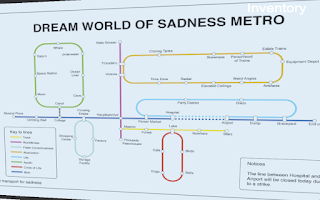 The game is free to download, but, again, what would your subway connect you to?  The various places I've called home are obvious stops.  There are some temples here in Korea that the addition of a subway stop of this sort would not seem too out of place.

Would I want a line that jumped from Earth (possibly from a wardrobe) to Narnia, Fillory, The Land, Middle Earth and Leigh Brackett's Mars?  What would the tolls be? Or trolls?  I was never a fan of the Shannara books as they were too derivative of Tolkien although I hear they have grown in their own ways since. Fianovar might be another good stopping point.

Ah, I'd have to play the game; linking any location to another seems to easy without constraints.
Posted by Surprises Aplenty at 4:27 AM