Word Count
Jan 6: 0
Jan 7: 0
Jan 8: 740 words
---
Nuclear waste, whether from medical equipment, power generation or bomb-making materials, can remain dangerous for hundreds of thousands of years.  Where can you put it?  How can you keep people away from it?  From 99% invisible:


Storing something safely forever is a huge design problem; in fact, the jury’s still out on whether WIPP has solved the basics of the storage problem at all. In February 2014, a leak was detected that exposed several workers to radiation, and WIPP has been closed since. The Department of Energy now predicts that it could be up to three years before WIPP is fully operational again.

We know these facts because we can look them up and read the news in a shared language. The problem that the aforementioned panel was convened to address was how to communicate information to people 10,000 years in the future.

This WIPP site is going to be radioactive for hundreds of thousands of years, though this panel was only responsible for keeping this place sufficiently marked for humans for the next 10,000 years—thinking beyond that timeframe was presumed to be impossible.

Three parts of any communication about nuclear waste must be conveyed to posterity: 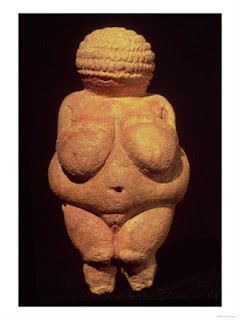 If this figure is recognizable after such a length of time, then making a symbol meant to last 10,000 years doesn't seem impossible.  From one of the above links, Carl Sagan suggested a skull-and-crossbones type of symbol; maybe a sickly figure would be as recognizable as the above is of womanhood.

I am not convinced that, now that we have written language, we will lose it again or lose the ability to read ancient scripts.  Still, 'maybe' is not good enough regarding the poisonous power of nuclear waste.  It would be better to be sure.
Posted by Surprises Aplenty at 9:40 PM