This summer, I noted the absence of two medical complaints that had appeared and disappeared mysteriously.


This condition started, I think, during a bout of food poisoning. between races to the toilet, I would relax and fall asleep. The dream would get weird and very realistic and I felt strong dejavu. Then my stomach would tighten and I would awaken trying to remember the dream.
But trying to remember also seemed like a trigger. For the next few years, I would be daydreaming and sometimes my train of thought would take me to a buried memory and as I tried to recall it, suddenly my stomach would cramp, I would feel weak and have trouble standing – just too tired. Then it would go away. I would get maybe five episodes over a day or a day and half and those episodes would start very intense but fade. I distinctly remember two things. 1) being afraid to remember something for fear it would trigger another attack and 2) trying to remember the scene or event that tantalized just before the attack.

I still don't know why they started or stopped but a writer being interviewed at A.C. Fuller's excellent Writer 2.0 podcast described having similar symptoms.  Turns out, deja vu can be caused by epilepsy!  At epilepsy.com, Mikey4 writes:


...tip me off to possible temporal lobe epilepsy after searching around a bit. They generally last about 10-20 seconds and are not accompanied by the same dread, or stomach discomfort, or fear, or happiness that seems to be common with many TLE patients, but they're also momentarily quite strong (and frustrating!) for me.

Kristin Seaborg, a doctor and the author interviewed by Fuller described similar sensations in her interview.  I don't know what this means for me. Seaborg was free of symptoms for many years so my current period without episodes doesn't mean that much.  Well, if I have another episode, I will know what to suggest to the doctor.

---
There are a lot of books and more that claim to improve a person's creativity.  I still don't know if any of them work but many of them have been handy and useful in my ESL classes if lacking in other value.  Working to link disparate words in the Central Word activity requires the creation of new sentences and, well, might improve creativity.
Luminosity's Brain Training games are now known not to cause cognitive improvement and the company has been fined millions for making such claims.

“Lumosity preyed on consumers’ fears about age-related cognitive decline, suggesting their games could stave off memory loss, dementia, and even Alzheimer’s disease,” FTC Bureau of Consumer Protection Director Jessica Rich said in a statement. “But Lumosity simply did not have the science to back up its ads.”

Again, I think lateral thinking puzzles and such can work as homework and improve fluency, so I'm happy to link to these examples.
---
This link might be the same as I recently gave regarding mnemonics, but it is via another source.  Joshua Foer via Kottke.

---
Sci Am says the key to creative greatness appears to be doing things differently, even when that leads to failure.

They don’t. In fact, systematic analyses of the career trajectories of people labeled geniuses show that their output tends to be highly uneven, with a few good ideas mixed in with many more false starts. While consistency may be the key to expertise, the secret to creative greatness appears to be doing things differently—even when that means failing.

So how are creative masterminds so successful, if they don’t really know what they’re doing? Simonton’s extensive analysis of geniuses found two major factors to be critical in explaining the creative process of geniuses. First, creative geniuses simultaneously immerse themselves in many diverse ideas and projects. Second, and perhaps even more important, they also have extraordinary productivity. Creators create. Again and again and again. In fact, Simonton has found that the quality of creative ideas is a positive function of quantity: The more ideas creators generate (regardless of the quality of each idea), the greater the chances they would produce an eventual masterpiece.

---
Last year, I took a free creativity class online from Stanford University.  Going into it, I decided to adopt a 'student's mind'; that is, I worked to be positive and open to new ideas and to restrain my  sarcasm.  I was wise to do that and should keep working on the practice.

Giving others the benefit of the doubt, then, may not invite deception; it instead seems to pay off—literally, Stavrova says: “So in most places in the U.S. and western Europe, being less cynical might be a better way to go.”

----
During the course, the professor lauded open offices.  I was skeptical at the time but they sure look nice.  Turns out, open offices are mostly terrible.

Maria went to a school with an open design. "Distracting at best and frustrating at worst," she writes, "wide-open classrooms went, for the most part, the way of other ill-considered architectural fads of the time, like concrete domes. The biggest problem with an open design, she writes, is noise. I agree with that. Wired magazine had an open plan and the constant noise and interruptions made it impossible to do actual work there

---
Con artists are master story tellers.
The lies described here were such that people feared to question them.  When a young woman in front of the Winnipeg bus station told me she needed money to go home, I was suspicious and didn't give her any.  If she had claimed sexual assault, I would have felt terrible if I were to ask questions or ask for proof.
---

Mark Frauenfelder has a course available on Skillshare.  I am sure it is a good one but I am more interested in the proliferation of online classes.  I have taken classes through Coursera and others that offer them from universities even though the classes don't always include university credit.  Skillshare doesn't seem to have any connection to universities.

Skillshare is a terrific online learning community for creative people. It teaches you new skills through well-made videos with great production values. I've been using Skillshare to teach myself Adobe After Effects. All the videos feature people who are professionals in their field. I love this site.

I found a cheap set of classes -also from Boingboing (Frauenfelder writes there) on public relations and the like.  I also registered for classes from 'goodriter' which were briefly free.  I'll be sure to describe what i think of their value once I find time to take them. I don't feel online classes have to be from a university to be valuable but I do trust the content more -even after describing my concerns with the creativity class I took. Does my reader (is it too much to hope for readers?) have any opinion on such classes?
Added Later: The Boingboing-promoted courses were with Stack Social and the goodriter classes were with Udemy.
---
Justin Green was a comic, uh, maker?  Author?  He made comics. They didn't pay the bills.  He went on to make signs in the final days of hand-lettering and hand-painting such things.  Then he wrote comics on the subject.  His comics are here.

The early strips tell how Green found his footing; including the one-thousand hours required to brush a perfect “O.” In later strips he requested techniques and stories from veteran brushmen. They offered priceless knowledge like how to mix your paint so it stays put under the hot sun or how much arm-twisting to apply when a client lets an invoice sit for too long. Some of these sign painters became recurring characters in “Sign Game,” and a few died during its run leaving these strips – and a few fading signs – as their final memorial.

---
Make a bicycle out of two Ikea stools!
---
Escape rooms are the new thing.  Earlier, I wrote about Altered Reality Games, a presentation I enjoyed from the 2015 International KOTESOL Conference.  They seem to have a few things in common.

...we met the six other players we were going to be locked in a room with. After a staff member explained the rules (no phones, no bathroom breaks, no brute force attacks on combination locks) we were led into a small room with a long table and a wall of old books. The door was locked behind us. We had one hour to figure out how to unlock the door and get out.
This is the smallest escape room yet, I thought. Were we going to spend an hour cramped together in here? I put the thought out of my head as I joined the others in going over the clues that would lead to the solving of the various puzzles. It didn't take long for us to crack the first puzzle. As soon as we did, one of the walls slid away to reveal a much larger room: the mysterious laboratory of of the Alchemist, an unseen evil being who was in the final stages of concocting a Philosopher's Stone to take over the world. It was our job to foil the Alchemist by solving a series of puzzles that would unite the elements of Earth, Air, Fire, and Water and let us escape from the room before our time ran out.

---
I am still working on my steampunk book set in 1830's Italy (and elsewhere) and secret societies play a big part.  Boingboing describes a book of Secret Society art.

What is made most apparent is how deeply these societies are entangled with folk elements. Images of death and resurrection abound, as do beehives, goats, and of course the all-seeing eye. There is esoteric lore and mystery layered with mystery. As David Byrne says in his foreword to the book, “The obscuring layers are the content.” And yet, the humble often outsider nature of the examples in this book reveal the most startling truth about Freemasons and others secret societies: these are the homegrown fellowships of our ancestors, people looking for fraternity and the warmth of a lodge, often during our country’s most difficult times. These were simple men and women, not the secret rulers of the universe.

---
What is the next frontier for science fiction and fantasy?  Tyler Cowan, at Marginal Revolution, looks at an Economist article.  Briefly, the answers are caves and forest canopies.
---
I love used book stores and hope they do make a comeback. 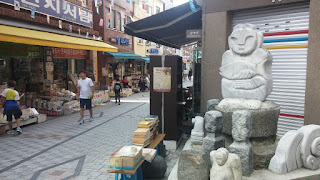 Posted by Surprises Aplenty at 2:00 AM