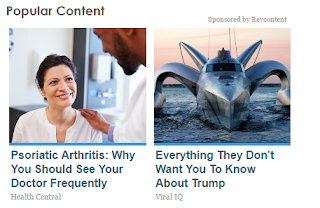 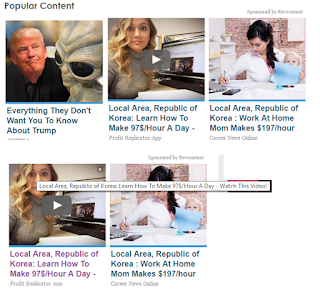 About the images: They were found at the bottom of a news blog I read. I love the variety of images they use with the same text and also the variety of text with what amounts to the same message.  I might write about $97 or $197/hour a day, whatever that means, but I love the similarities and differences.

Click-bait: Psoriatic Arthritis: Why you should see your doctor  frequently

I did something I shouldn't for these stories; I researched. I mean, I just visited Wikipedia but that is more than these stories deserve. I just wanted to be a little sensitive in my descriptions. But now I worry that I have this disease! My toes are misshapen and my toe nails hideous.
Even before I checked Wikipedia, I was thinking about superheroes (see more in the next story) and Larry Niven's Protectors. This form of arthritis does give a slight Pak Protector look to the infected. But now that idea has already been used - and I am not up to writing something to compare to Niven at his peak - so no more research in fear of losing all my gestating ideas!

Step-clunk. Step-clunk. The middle-aged woman made her way through the park, noticing several other park goers enjoying the sunshine.  They stood there, barefoot and arms outstretched, the sun's beams lighting their happy faces. Angie wanted to join them. it would be so nice to let go of your cares for a few moments and be part of nature.
But her husband and son had reminded her to see the doctor again and again. She'd told them she didn't need to see a doctor, that she simply had a fungal infection in her toenails.
She was surprised at how hard it was to leave the park and tread again on concrete.  The clinic was only a few minutes away and if it had been longer, she probably would've turned back.
Dr Washington looked haggard, with yesterday's five o'clock shadow growing on his face. He welcomed her into his office and patted her shoulder as she sat. A look crossed his face and he left the room briefly, returning soon and rubbing his hands. She could smell the alcohol from the cleanser he'd used. She frowned realizing he'd done that after touching her.
Before she could speak, he asked, "You were limping. What have you done with your foot?"
"I have a skin condition", she told him. "It seems part of or aggravated by my psoriatic arthritis."
His smile hardened but didn't fade. "May I see?"
She glanced at the door -closed - and that finally sent a tendril of concern into her chest. She took a deep breath as she removed her shoes and then her pants for her condition had spread well beyond her foot. After the pants came her tattered left sock. She hardly seemed aware of how it tore and pulled on the dark, crusty lumps on her ankle and foot.  As she removed her sock, she looked at Dr Washington.
The man's face was returning to a professional look. Evidently, it had held a different expression while she disrobed.
She sat back down and expected him to examine her foot. She realized what would help him and lifted her foot and set it on a planter pot in his office, not really near him, but surely he would appreciate not having to bend so far, even if he would have to walk a few steps to get close.
Again, she caught his expression returning to a bland look.
He put gloves on and clearly avoided the spot where he bare foot had touched the floor. He crouched studied without manipulating it as he had to test for mobility in previous visits, a year ago.
"You really should have come to see me earlier", he told her. "I am going to book a hospital room now. You need to be go into quarantine and we need to take drastic measures to save your knee."
This penetrated her calm. "My, my knee? What do you mean?" She curled her arms against her chest and pulled her still sock covered right foot under her chair.
"You are very sick and this is terribly contagious", he told her. "Don't worry about money. The CDC will pay for all treatment and we need to examine and test the rest of your family."
She knew what to do. She swung her black, gnarly, knobbed foot at him and he stumbled back with a shriek. Then she was out the door, wearing only a top, panties and one sock. She knocked a man out of the way and was out of the clinic.
She didn't know where to go so she just ran. Stride-thump. Stride-thump.  She wasn't surprised to see that chance was leading her into the park.  She joined the other sun-worshippers and noted with no unease at all that they too were in varying stages of undress, all with bare, mottled brown, tree-bark legs and feet. She wiggled her toes into the soil, spread her arms and relaxed.
Soon, men with gasoline tanks on their backs arrived to spray the several dozen people but by then she was unaware of the sting and stench and later the burning.

'None of these people will listen to me', thought Donald Trump as he walked forward to reluctantly give his acceptance speech.
None of that reluctance was visible. Indeed, close observers noticed he seemed to be restraining his powerful body as if he could have leapt across the room if he chose.
He thought back to sixteen months ago when his son-in-law Jared suggested he accept the pleas of the populace and run for office. At the time, it had seemed a great cover, and if he refused, more people would ask why than if he accepted.
And so he had accepted. Media scrutiny had left his other endeavors alone and he made great progress in finding evidence that world would believe about the real threat to America. Soon, it would be soon. Then he could end the charade, take off the fake stomach that added forty pounds and several inches to his waist. The presence of a fake stomach was the least of it; if people knew what was in it...
Again, he had been distracted by his obsession. Now he stood at the podium and looked out over the crowd in front of him. .... Lansing, Michigan; that was where he was.
"People of Lansing", he boomed out, barely needing the microphone. "You there, you in the Packers hat", He smiled at the man and ran on autopilot, "We need packing jobs here, in the US, not taken away by aliens, given to aliens!" Oops, tone it back a little.
And so he multi-tasked. While bizarrely suggesting that Michigan had some edge or unique interest in packing, based on a city that was actually in Wisconsin, he thought back to when he was finally awakened to the threat the US, and the world, faced.
An assistant of Alex Jones had spoken to him after a radio show and given him the device that was now strapped to his his powerful abs. The device blocked some radio signals from interfering with his nerves but it did more. It replied in a signal that claimed he was indeed in thrall to them, that he wasn't a threat. He had walked among the reptilians and they hadn't  noted his awareness of them.
Jones himself had been replaced over a year ago and the man who gave him the device was now hidden in one of Trump's luxury towers, in a penthouse that did not exist in the floorplans.
And so when Donald had been tracking down the aliens and their technology and taking his Grav Magda and Muay Thai and Hae Dong Geom Do and building a body of steel and people noticed him. His darting eyes made him seem curious rather than terrified. This  drove him to lead a double life, on the one hand playing the billionaire playboy and on the other, fighting Earth's greatest threat. No wonder he did not care at all about climate change!
When friends suggested he run for office, he had similarly acted interested while thinking about a lead in China. He came to full awareness suddenly realizing he'd agreed to run for president.
But if he did, the media would dig through his history and odd disappearances. He had to stay on but also work to lose.
His mind like a Cray supercomputer suddenly put it all together. How his apparent racism had gained him votes, how his claimed lack of interest in foreign policy was seen as a positive trait, how it all fit. His device was working so well, the reptilians were behind it. They thought they controlled him.
And so, sadly, in coercing everyone else to vote for him, they seemed to control him to. The irony made him furious but he could see no way out.
His realization lead him finish his speech, with an attack on the cheeseheads of the neighboring state.  Wait. That was where Green bay was. Damn.  These aliens had really grabbed him by the pussy.
Growling with awareness of how little he really mattered, he punched a media man, maybe that Blitzer guy as he left. The audience cheered and together ripped the CNN man to pieces.
The next day, both Michigan and Wisconsin's legislatures unanimously organized Donald Trump Day to replace Christmas.

Posted by Surprises Aplenty at 11:59 PM