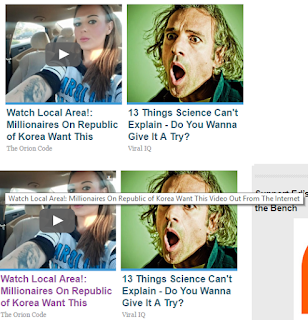 Watch Local Area!: Millionaires On Republic of Korea Want This (Video Out From The Internet) (Orion Code)
First, I am writing a story about a strange quasi-religious order guiding human progress for the past 1,000 years. For no better reason than I liked the image, I named this group 'The Orions'. Maybe this is one click bait article I need to read!
I love the punctuation and the idea of taking something 'out' of the internet.
--
The calls travelled swiftly. In the world's most connected country, of course they did. It is probably impossible to say for certain who noticed the video first but one of the first must have been nineteen year old Choi Shin-il.  His posts on his Naver blog and promoting of same on Kakao Talk, Facebook and even the archaic Cyworld mini-hompies bear the earliest time stamps.

Late the previous night, he had finished his shift at his parent's noodle restaurant. The work meant he finally had more than a million won, around 900 US$, saved. He had sat down to study and four hours later, around three in the morning, he took a break and saw it.

The video was a new BBC expose on Korea's boshintang or dog-soup restaurants. It went into detail about how the dogs were prepared before being cooked. For the faint-hearted, I will not describe the video in detail, only say that Koreans feel the adrenalin and the softening of the muscle by vigourous beating while the animal is still alive gives it good flavour.

The men, mostly, who ate it did so to increase 'nighttime stamina'. The BBC went into detail about how the typical Korean salaryman smoked and carried a lot of stress and this might lead to concerns about sexual potency. Nothing was left out; the Beeb was very thorough.

Young Choi's posts were timestamped three oh-eight am. By seven am that day, BBC recorded more than a million people had watched the video. In the next two hours two million more did. Seoul's wonderful subway system had its free Wifi crash multiple times during that rush hour.

And at about eight in the morning, at the high point of video watches, the BBC received a new datum; a number representing complaints about the video. More than half were in Korean, with roughly another forty percent showing signs of having passed through an internet translator and the final few percent in, well, interesting English.  A sample:

We the full population of South Korea want this video taken out of the internet.

This number of complaints reached nearly as high as the number of watches but climbed several times above that as Korean hackers created bots to send multiple complaints.  Whether begging, requesting, or threatening, all asked, or told, the BBC to remove the video.

At ten thirty that morning, the British Embassy noted a growing crowd outside. At twelve, they shut all their doors and hunkered down.  That night more than a hundred thousand protesters were outside.
The protests spread across the internet, with Youtube facing threats and requests to remove the video. More than twenty thousand Korean citizens claimed the video infringed on their copyrighted material and filed DCMA requests to have it removed.

13 Things Science Can't Explain - Do You Wanna Give It A Try? (Viral IQ)

1 Gravity - physicists only wish it were as well understood as evolution
2 My wife's smile
3 Origin of first life
4 How the leads of mechanical pencils break so often but people keep buying them
5 How jalapenos from the fridge are hotter in taste than jalapenos in cooked, hot food.
6 The warmth of my dog's snuggle
7 How Psy is popular.
8 Nitrogen narcosis
9 The Taos hum
10 How that much food can fit inside my son
11 The E.M. drive
12 Donald Trump
13 How Justin Bieber is popular
Posted by Surprises Aplenty at 5:06 AM