The problem of plot twists.

I’m not sure if the problem is the much touted demise of critical thinking, of big picture analysis, or of our shortened attention spans, but too much narrative art seems to think that it doesn’t matter if the whole doesn’t make sense so long as the moment-to-moment stuff keeps us on the edge of our seats. It does matter, if only because if we realize that the solutions and revelations don’t really stand up to scrutiny, then what’s the point of watching at all? The twist in a tale can be potent when it’s earned and part of a larger narrative design, but when it’s just a flash bomb, a distraction from the lack of substance in the story, it derails the whole plot, setting everything off down some new track like a hastily thrown point on a railway line.

---
Fletcher Hanks wasn't necessarily a great artist but everyone must love this image! The Leopard Women of Venus riding Giant Saurians and firing comets from their head guns! 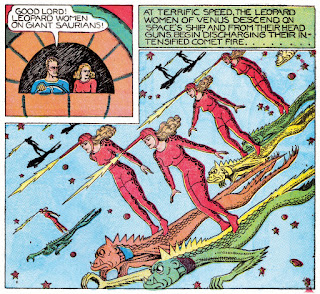 Good Lord, indeed!
A little more info on the man at Wikipedia
---
I don't pay a lot of attention to fonts. I am not even sure of the way to describe groups of them. I like serif fonts - or should I say, "fonts that have serifs" and that is nearly all I know. Wait! At a teaching conference I learned that educators should use two or three different fonts in their handouts; one for instructions, one for questions the student needs to answer and a third for any examples given.


In this video, the creator of Comic Sans defends and discusses his controversial font.
"If you didn't notice (a piece of art), I considered that was bad," Connare says. "And if you did notice, it was good."

---
Productivity is always my biggest challenge. Maybe I should write my to-do lists so the public can read them.  Joe Reddington made the experiment as part of an attempt to live more transparently. I was fishing through his blog post and only focused on the parts I was interested in for this blog so my discussion might not be entirely accurate on the big details.  He posted a graph that I had trouble following so I made some additions, then shrank it a little. To see what I changed, follow the link above but I will also describe them below the pic. 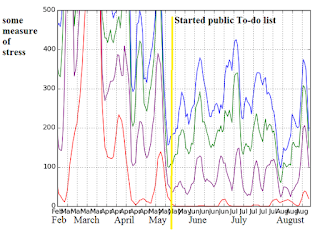 This is a 'stress-chart' and he probably describes what it measures elsewhere. I don't know what the colours mean. The letters at the bottom of the chart are the months and probably labelled for each each which is why there are multiple copies of them. I added the names of the months below. I also added "Some measure of stress", the yellow line and "Started public To-do list". In his post, he described doing so in May and there certainly is a drop in stress after that.
He thought his To-do lists were clear and informative, but:


Turns out I was missing something important. When it was a list for me, it looked great; when I decided to make it public, it instantly looked very poor.
I suddenly saw:
So I started rewriting. Of course, to write out a task properly, you first have to think properly about the task.
Suddenly each of these took less thinking when I cast my eye down the list. That makes them easier to start, and that makes them easier to finish.

---
Patents vs the prize system in the eighteenth century.


The empirical analysis shows that inventors of items that were valuable in the marketplace typically chose to obtain patents and to bypass the prize system. Owing to such adverse selection, prizes were negatively related to subsequent areas of important technological discovery. The RSA ultimately became disillusioned with the prize system, which they recognized had done little to promote technological progress and industrialization.

Posted by Surprises Aplenty at 6:17 PM