It seems like even easy posts like This Week In Creativiti are shrinking.  I normally start a new TWIC around the same day I post the finished one. Then I add to it all week.

Big news! I have a job! Last year we moved to a new city in South Korea and I took on various short contracts while looking for more full time work. I am fully employed again!

It is a new position and I need to plan new lessons and organize homework and such so posting here has been infrequent.

Indeed, it is now Sunday and TWIC normally goes up on Monday evening or Tuesday. I gotta find some stuff.
--
Deep Thinking: Where Machine Intelligence Ends and Human Creativity Begins. The book doesn't come out for another six or seven weeks (May 2) but it looks interesting for a variety of reasons.

---
Getting on? Maybe it's time to build your own coffin.
---
Theft. A history of music. The link goes to a site to buy the book or download a PDF free.
---
shortlist for Sony's world photography awards.
--
Unintended consequences  What would you want if you could any one thing, real or imaginary? How difficult would it be to keep it?
---
Tremendously wealthy and still working on Sundays. Why? The article is about ambition and motivation. Things I need.


Consider the journalist Ryan Avent, who recently wrote a piece titled Why do we work so hard? He confesses to an internal struggle about the pros and cons of his self-described workaholic life. But he ends up optimistic about his tradeoffs. For his grandparents, he says, work was a means to an end. “Work” was the thing you did during the week to make money in order to enjoy “life” on the weekends. For our grandparents, in a different economy, work was duller and more physically taxing. Today, for the educated among us, work can be intellectually invigorating as never before. It’s easier to love your work, as he says he loves journalism. When his parents worry about his job and its long hours, Avent observes the disconnect: They are asking him about his “work,” he says, but “I am thinking about identity, community, purpose – the things that provide meaning and motivation. I am talking about my life.”

The Components of Happy Ambition: Tweaks to Prioritize Happiness As You Quest for Meaning
Become mindful of status triggers with mindfulness meditation
Set fewer goals. Love the craft itself: be process-driven, not goal-driven
Choose work and set goals where relative status is harder to compare or measure
The people around you shape the nature of your ambition, so pick your peer group carefully
Diversify your identity by operating a portfolio
Operate a dashboard, not a leaderboard. Play against yourself, not an opponent
Physically move and be a big fish in a small pond

---
Designing the graphics for Harry Potter movies. I am a 'get the function right and don't worry about the design' guy. I make some useful things but I seldom go the extra mile to work on the presentation.  My PPTs of lesson materials carry the details I want and I value simplicity but they could be better organized. One thing I know I should fix is consistency - A constant style in how I display information so students know where to look. On one slide I might have nouns in blue but on the next slide I have circled the nouns. Ah, enough about me. I like the depth of planning that went into basically all movies and this example shines.
---
A fantasy map generator. Kottke does a good job of summarizing how this generator works and why it is special. There are some small scale generators too play with but the completed work is posted to Twitter @unchartedatlas. 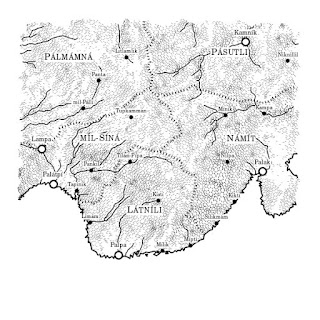 ---
Need to add whale song to your life? Here is a whale synthesizer. It sounds awfully like a theremin to me.
---
Posted by Surprises Aplenty at 9:00 AM