It might be time to make this a cartography blog. I've certainly offered a number of map generators, and design tools. Here's another.

So a few weeks ago, I discovered that you can use Google Maps to draw on existing cities and make custom maps of your fictional locations. Needless to say, I was EXTREMELY EXCITED. Being an author practically guarantees you will struggle with real life details like travel distance at some point in your book. If you're writing about a real city, the bar is even higher. Even if you're writing about your own city, a map can be a life saver just for keeping everything straight in your head.
For years now, I've had to draw those maps by hand, and let me just say: a cartographer I am not. Enter Google Maps. Let's say you're writing a story set in London. Going to Google Maps to look up a street map is obvious, but Google has given us tools to take that even further, allowing authors to draw new boundaries, set landmarks, and make notes right on a custom map that you can save! And best of all, it's free!! (Well, okay, there is a paid version that has more features, but for our purposes, the free version works perfectly well).
All that said, the Google Maps customization interface isn't exactly user friendly. Most people don't even know it exists (I found it by accident). This a crime! Something this useful should be known by all! Lots of people on Twitter agreed with me. So, by popular request, here is my guide to using Google Maps for world building.


2. Christie was very good at hiding the identity of the murderer. And she usually did this cleverly and fairly.


Today I’m only going to concentrate on (2), above. (If you would like to read more about including romance in a story, see: The Structure of a Romance Story.)

How to Make Readers Think the Murderer Couldn't Have Done It.


There’s no other way to say it: Agatha Christie deceived her readers! And we loved it. How did she do this?

7 Ways to Disguise a Murderer:


1. Agatha Christie made readers think the murderer was a victim. (Peril at End House.)


Examples: Peril at End House, The Tragedy at Marsdon Manor, And Then There Were None.
In PERIL AT END HOUSE Nick—the eventual murderer—convinces Poirot that someone is trying to kill her. She is subtle and drops clues she knows the great detective (who loves clues!) will pick up on.

@SamSykesSwears I've always wondered, do you & your Mom just pretend neither of you write sex scenes?
— Kat Arnett (@katarnett) March 17, 2017


I'm one of those people who has trouble writing at length on my main machine, because of all the distractions it offers. Email and messaging and social networking: they all combine to form the "ludic loop" that Mark recently blogged about.
I've tried various things over the years to help keep me focused, from simple full-screen word processors such as WriteRoom and FocusWriter to gadgets like the Alphasmart and Freewrite. But apps are a tab away from fun, and glorified typewriters tend to expose their limitations in odd and frustrating ways. 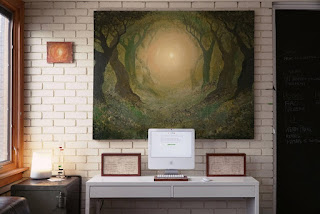 Full-sized image at the link.

GRR Martin does something similar. He uses an old word processor that does 'all the things he needs and none of the things he doesn't'. Autoplay video and GRRM interview here. Specifically, he uses Wordstar.
---
What is the purpose of creativity? This is a question at Quora that I answered. I think Velikovsky's answers is excellent and contains links to interesting articles on creativity and evolution. His blog is here.
---
Gaiman on reading and libraries


I was in China in 2007, at the first party-approved science fiction and fantasy convention in Chinese history. And at one point I took a top official aside and asked him Why? SF had been disapproved of for a long time. What had changed?
It’s simple, he told me. The Chinese were brilliant at making things if other people brought them the plans. But they did not innovate and they did not invent. They did not imagine. So they sent a delegation to the US, to Apple, to Microsoft, to Google, and they asked the people there who were inventing the future about themselves. And they found that all of them had read science fiction when they were boys or girls.

---
Songwriting at Literature suggestions An ESL instructor colleague asked for suggestions for a Songwriting as Literature course. Here are some of the suggestions
Bob Dylan - Nobel Prize winner
The Road Goes on Forever - Robert Earl Keen
Otis Redding's "Dock of the Bay"
Rappers, sorted by the size of their vocabulary
The Logical Song - Supertramp
Simon and Garfunkel
They Might Be Giants
Wesley Willis
American Pie
American Songwriter.
Nick Cave & the Bad Seeds - Murder Ballads


---
Pixar Story Telling class - Did I offer this link before?
---
Starting writing late in life. The writer started writing novels at age 47 and says that's old. I guess at 49, I am in trouble.


So what about those thirty years I wasted in self-doubt?
I don’t think they were wasted, actually. In fact, I’d argue that the best thing a writer can do is delay publishing for as long as possible.
This isn’t an attractive argument; it’s not sexy. Nobody’s going to make any Top Thirty Under Thirty lists that way. And dammit, writing is difficult. It takes so much hard work and dedication. How long can a person go on working with nothing to show for it?
As long as you can.
Those thirty years didn’t just make me a writer. They made me a good writer. That paralyzing self-doubt morphed into a keen sense for quality in my own work. When I write something that stinks, I can usually smell it. I’ve been reading for more than forty years, so I have thousands of great books and stories banked for information and inspiration. And best of all, I have a lifetime’s worth of unplumbed material to draw on—I’ve seen the world in all its glory and ugliness.