Need to understand human anatomy? Via Quora.
---
Emerging writers vs those who make $100,000 a year.

---
The New York Times tells us to schedule time to be creative.


In many non-public industries, success is like hide-and-seek. Companies find an advantage—a secret sauce, like the Coca Cola formula or a Netflix algorithm—and guard its secrecy at all costs. But web journalism is a radically public business, where writers can see what headline tropes get retweets, which stories blow up on Facebook, and which companies finish the month with the most readers. This business isn't like hide-and-seek. It's like Sardines, the derivative game where one person hides (e.g., under the sink), everybody else tries to find and join them, and the last person who doesn't see the clump of people in the kitchen is the loser. That's web journalism. Ruthlessly maximizing audience means figuring out what's working—for you and for everybody like you—and doing it over and over.
Writers are caught between the commercial instinct to maximize attention to articles that they've spent lots of time writing and the aesthetic instinct to not hate every fiber of their very being after they write the headline and press the publish button.

---
Hide secrets in your writing.

How to hide secrets in your story
The true aim of hiding secrets in your story is to give the reader autonomy – to give them reason and motivation to investigate your writing and engage with it on the deepest possible level; one where you’re no longer around to guide them. Because of this, there are actually a couple of ways to hide your secrets.

...Dan Brown’s Deception Point includes a series of letters and numbers on its last page, offering readers a code to solve. Using the book itself, the codes can be translated into individual letters, which can then be placed into a five-by-five square to reveal the message [redacted - follow the link if you really care]

References and clues
References and clues are a less direct way of engaging the reader, but can be incredibly satisfying in their own right. Books like The Eyre Affair and The League of Extraordinary Gentlemen populate their stories with characters from famous works of literature.

Context and hindsight are the most natural ways to seed secrets into your story. When, for example, the reader learns the true identity of Fight Club’s Tyler Durden, earlier scenes take on new meaning, and a second read-through renders familiar scenes in a different, transformational light.

The theory is a patchwork of throwaway moments, strange comments, and interlinked details, and it’s unclear whether it will ever be confirmed or denied in the books themselves. In a series built on myth and intrigue, it’s a tantalizing possibility – a treasure trail that invites fans to think back and interrogate scenes, even as they wonder how it could come to a head in the future. If the theory is true, it’s a masterclass in how to hide secrets in your story, and it never needs to be resolved to have value. There’s as much enjoyment in piecing together a behind-the-scenes story as there is in seeing a theory turn out to be right. 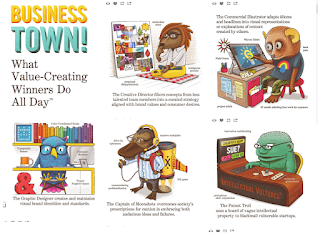 Image shrunk greatly, to see full size, follow the link.
---
One trait I kinda/sorta share with Gates and Branson. We take notes. At the link are five tips, from which I have removed the details from, leaving below only the titles:


1. Create your own system. ...
2. Write down your thoughts immediately.
3. Expound on your thoughts later.
4. Store your notebooks for future reference.
5. Review your archive regularly for patterns or associations.

Semi-related: I have been rereading Kim and reading Bayonets to Lhasa as research for my steampunk novel set in Nepal. Mostly, I've been using my Kindle's highlight feature but I should be writing down my notes and remarking why I found them interesting.
---

Posted by Surprises Aplenty at 9:22 AM