The science behind productivity and bullet journaling.

First it's important to understand a huge body of scientific research shows that old fashioned journaling -- nothing fancier than dumping your thoughts onto the page -- can be hugely positive for mental health This suggests that basically any way you find to get your thoughts down on paper is probably going to help you calm your mind and get stuff done, though no specific studies have yet been done on bullet journaling (so this is al just informed speculation).
That being said, this more graphical form of journaling might provide unique benefits, several experts believe. Neuroscientist and author Daniel Levitin, for instance, suggests that one of the system's advantages is that it works like an external memory extension.
"The conscious mind can attend to about three things at once. Try to juggle any more than that and you're going to lose some brain power," he tells Davis. A bullet journal might be helping its fans get past that inherent mental limitation.
It might also help shut down a psychological phenomenon known as the Zeigarnik Effect, which states that it's easier to remember uncompleted tasks than completed ones. When an undone task keeps intruding into your thoughts, simply planning out when you'll complete it can help clear it out of your mind, research shows. That's why you often write a to-do list, feel better, and then simply lose it. It's also why bullet journals may be so soothing for some, according to psychologist EJ Masicampo.

And from Quora, where I am spending way too much time: Is journaling a creative necessity?
---
An editor's opinion on self-publishing


The Problem
The self-publishing industry includes very few quality barriers, an unfortunate shortcoming that leads to infamous works like E.L. James’ Fifty Shades of Grey. And, because self-published authors are obliged to format, promote, and design both the covers and images for their own works, publishing becomes so cost-intensive that many quality authors simply can’t afford it. “Those authors work in a vacuum,” Logan says, “with very little outside support.”
In short, the self-published market has become so flooded with mediocre texts that most people have come to view all self-published texts as inferior.


If there’s one thing that reading these books so closely together drove home, it’s how fantastical travelogues emphasize the pleasures and wonders and marvels of the journey, while actual, real travelogues emphasize how annoying and awful travel can be. Real travelogues will include at least some ranting, while fantastical ones often emphasize the amazing and wonderful nature of the places visited.
This pattern may not be universal, but it does seem to hold when I think over things I’ve read in the past—from travel writings by Mary Wollstonecraft and Isabella Bird Bishop to fantastical stories of travel by authors like Jonathan Swift and Marco Polo’s Travels (significant portions of which it’s believed are retellings of others’ stories). There are exceptions, of course, like Peter Mayne’s jolly and amusing A Year in Marrakesh (discussed here), but I think the pattern overall holds… probably for good reason. Visiting a foreign place involves the actual discomfort and dislocation of travel; fantasy, the spectacle and splendor without the trouble. 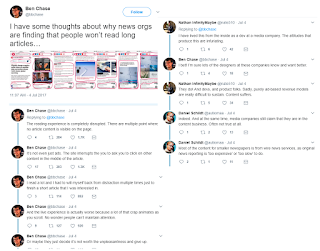 How Jim Davis got his start (I do not see a way to link to the specific comic. Look for July 6, 2017) (This image has been cropped greatly and shrunk slightly. To see more follow the link and search). 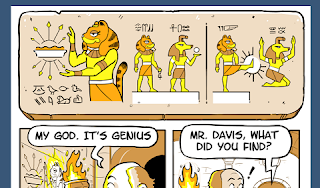 The What Should We Draw podcast looks fun, too.
---
A list of 38 books to help you write. The first four:
---
Murakami's advice for young writers


Remember that scene in Steven Spielberg’s film E.T. where E.T. assembles a transmitting device from the junk he pulls out of his garage? There’s an umbrella, a floor lamp, pots and pans, a record player─it’s been a long time since I saw the movie, so I can’t recall everything, but he manages to throw all those household items together in such a way that the contraption works well enough to communicate with his home planet thousands of light years away. I got a big kick out of that scene when I saw it in a movie theater, but it strikes me now that putting together a good novel is much the same thing. The key component is not the quality of the materials─what’s needed is magic. If that magic is present, the most basic daily matters and the plainest language can be turned into a device of surprising sophistication.
First and foremost, though, is what’s packed away in your garage. Magic can’t work if your garage is empty. You’ve got to stash away a lot of junk to use if and when E.T. comes calling!


XPrize and ANA present a series of short stories "of the passengers from Flight 008, imagined by the world’s top science fiction storytellers, as they discover a future transformed by exponential technologies."

The book has stories from many top writers, but there is also a contest!


XPrize and ANA present a series of short stories "of the passengers from Flight 008, imagined by the world’s top science fiction storytellers, as they discover a future transformed by exponential technologies."


What’s your process for editing your own work?

I repeatedly edit it many times, at least ten. I just keep on doing it, until I can’t think of further improvements. I can’t say that is a process in any formal sense, simply a recognition that the “process” to date hasn’t worked very well and so it must continue. I don’t pretend this is efficient.
How do you finish out a day of writing? Do you have a process, or is it just that you know you’ve hit a natural stopping point?
I try to finish out early, so my mind is clear for reading, meetings, other kinds of decisions, whatever I need to do. I can’t write for anything close to a full day, it involves too much concentration.
How much of a day for you is spent in research versus writing, or are you doing both at the same time?
Both at the same time, but it depends what stage the project is at. In the earliest stages, the proportion of research is much higher. After a while, it simply ends up being a process of editing out mistakes and infelicities. Then I will go and restudy or reread the key materials I used.

---
This plot needs work! Here is the work that needs to be done.


I realised, about 37,000 words in, that I was quickly loosing track of my characters and their goals were getting fuzzy. I didn’t know where the novel was going.

I wasn’t prepared to throw out the whole thing and start again, because I think I have some good work in there and I’m not prepared to give up those words. Not yet.

What did I do? I read.
Step One
I started with a revision of the Heroes Journey, the 12-step structure of mythical stories that just about every novel I can name adheres to. The official definition, from the link above, is:

The Hero’s Journey is a pattern of narrative identified by the American scholar Joseph Campbell that appears in drama, storytelling, myth, religious ritual, and psychological development. It describes the typical adventure of the archetype known as The Hero, the person who goes out and achieves great deeds on behalf of the group, tribe, or civilization.
I got out some colorful pencils and sketched it out for myself: [image removed - follow link to see it, and a whole lot more, including four more steps.]


80,000+ sewing patterns online. I don't sew but this might also be interesting to see how fashion and style has changed.


McCall's, Butterick, Simplicity. If you were into sewing, or simply spent time as a child rummaging through patterns with your mother at the fabric store, these names will bring on a wave of nostalgia. And now, thanks to a fantastic online collection of vintage sewing patterns, it's time to dust off your sewing machine.
The Vintage Patterns Wiki boasts more than 83,500 patterns that are at least 25 years old, which makes for a fascinating look back at fashion history. As a collaborative effort, the database is constantly being updated and organized, with any newly uploaded patterns dating prior to 1992. Just click on the cover and browse the list of pattern vendors who have the look.

---
From Quora: How do I write a long blog article? As others noted, writing new material of whatever length is appropriate seems a better goal than 'long'.

Posted by Surprises Aplenty at 9:30 PM