The Worst Muse Twitter account isn't active these days, but there is lots of (terrible) advice there. 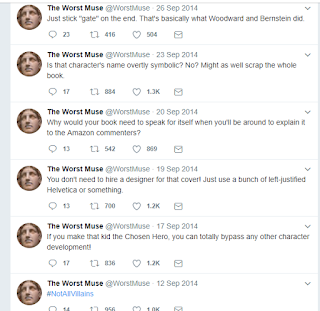 ---
Help transcribe texts on magic for the Chicago Library. C'mon, what could go wrong?


“You don't need a Ph.D to transcribe,” Christopher Fletcher, coordinator of the project and a fellow of the Andrew W. Mellon Foundation, tells Smithsonian.com. “[The initiative] is a great way to allow the general public to engage with these materials in a way that they probably wouldn't have otherwise.”


The three manuscripts now available online reflect the varied and complex ways that magic fit into the broader religious landscape of a shifting and modernizing West. The 17th-century Book of Magical Charms contains instructions on a range of magical practices—“from speaking with spirits to cheating at dice,” according to the Transcribing Faith website—but also includes Latin prayers and litanies that align with mainstream religious practices. An untitled document known as the “commonplace book” explores strange and fantastical occurrences, along with religious and moral questions. Cases of Conscience Concerning Evil Spirits by Increase Mather, a Puritan minister and president of Harvard who presided over the Salem Witch Trials, expresses a righteous condemnation of witchcraft.

---
The Real Creative Process Here are the five steps offered at the link. I snipped most of the explanations so if you want more, follow the link:


1 Preparation
Preparation involves forming a question about our project and immersing ourselves in the search for answers. We decide we want to create something and set out to learn how. It doesn’t just involve pre-work for the project itself; it encompasses everything we’ve ever done or felt.
2 Incubation
Our subconscious processes what we learned in the first stage and assembles it more easily and cleverly than our conscious mind ever could.
3 Illumination
This is the part everyone thinks happens automatically, and pretty much never does. Occasionally, after some Incubation (which could be weeks, months, or the amount of time it takes to have a shower), our muse will deliver a nice little package for us.
4 Verification
More often, though, verification is the part where we discover our ideas still need work. If we’re not careful to be very gentle with ourselves at this stage, it can feel like the creative equivalent of waking up hungover next to the person we brought home from the bar, who, in the cold morning, looks more like a melted candle than the thing we took to bed.
5 Elaboration
Elaboration is where we renew our commitment and run through steps 1-4 again and again until we end up with something we can love.
Although I’ve written the process as if it always goes in order, Csikszentmihalyi reminds us “that the five stages, in reality, are not exclusive but typically overlap and recur several times before the process is completed.

---
More on Feynman and notebooks.
---
A list of rules for brainstorming. These three stand out for me (follow the link for the rest and a video):


3. Build on the ideas of others
4. Stay focused on the topic
5. One conversation at a time

I think these specific rules work for a group brainstorming session but seem to step on the general rule against editing. Perhaps the video explains things.
---
Being busy is killing our ability to think creatively. There is a quote within a quote below - the nested quote is in italics


Little good comes from being distracted yet we seem incapable of focusing our attention. Among many qualities that suffer, recent research shows creativity takes a hit when you’re constantly busy. Being able to switch between focus and daydreaming is an important skill that’s reduced by insufferable business.8 As Stanford’s Emma Seppälä writes:

The idea is to balance linear thinking—which requires intense focus—with creative thinking, which is borne out of idleness. Switching between the two modes seems to be the optimal way to do good, inventive work.

This reminds me of John Cleese saying that he needed 15 minutes to get into a project and any distraction, even a short one, required the same 15 minutes warm up.
Hmmm. I can't find that quote but naturally there is a lot of interesting Cleese has said. Here are a few places to look. One. Two. Three.
---
I remember forty years ago we were about to put up panelling or wallpaper in a room and the evening before, dad brought out pencils and, well, stuff - it was forty years ago, the details are hazy - and we decorated the walls with our art before they were covered over and hidden.
The same thing was done on a larger scale at a school about to undergo renovations. 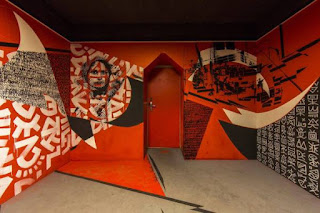 Their Facebook page with many images of the art.

Posted by Surprises Aplenty at 8:14 AM