Grant Snider discusses perfection. I'm a fan of his posters and have bought some for my sister. I want this one, if anyone is interested in helping me with that desire. Actually, I don't want the image below that I deliberately scrunched - follow the link to see the full image: 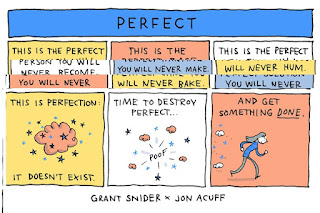 Boy. I really like the poster but the crumpled version I made to show looks very negative. Really, it is a cheery poster in full.
---
Focus when writing - and probably any other creative pursuit:


"While writing, shut down email and internet access. All of it! ... We need to practice and strengthen our long-deep writing muscles for most effective — and satisfying — story sinking."
Winnipeg author and actor Anita Daher

---
The book that inspired Dune!


Anyone who has obsessed over the mythology of Dune will immediately recognize the language Herbert borrowed from Blanch’s work. Chakobsa, a Caucasian hunting language, becomes the language of a galactic diaspora in Herbert’s universe. Kanly, from a word for blood feud among the Islamic tribes of the Caucasus, signifies a vendetta between Dune’s great spacefaring dynasties. Kindjal, the personal weapon of the region’s Islamic warriors, becomes a knife favored by Herbert’s techno-aristocrats. As Blanch writes, “No Caucasian man was properly dressed without his kindjal.”

---
On Quora, 100+ people share some of their creative work
---
Selling a book bundle on Amazon. TL;DR: combine the 2 or 3 or # of books into one file, make a new cover and upload it to Amazon.
---
Describe a cup of water. The lesson Robert Jordan gave Brandon Sanderson.
---
Should I write more sexy scenes? Part of a newsletter I get From Skinny Artist:


So she was wondering if she should start writing romance novels instead.
Not just romance novels, but “erotica” novels, which I’m told are kind of like the foul-mouthed step-cousin of the romance genre.
When I asked her why she was thinking about changing to this particular niche, she told me that it was because these novels are typically short and sell extremely well. There’s apparently a huge demand for these type of books, and ebook readers are known to buy them one right after another.
But here’s the thing. Tracy has never read an “erotica” book in her life, and she doesn’t particularly look forward to writing one, but she said that she’s tired of putting all of this time and energy into writing her thriller novels year after year only to watch them gather dust on the virtual shelf.
I mentioned to her that although I'm sure there are a lot of erotica authors out there who are selling a ton of books, she was probably going to make herself miserable if she didn’t have a passion (ahem) for the subject matter.

Posted by Surprises Aplenty at 11:42 PM