I think this is a creativity-related post.Writers don't get far without readers so we need to encourage reading, right? Of course, I don't think authors make much money on sales of used books!

Let me argue this point a little. This post is creativity related in two ways. First, the area I will soon describe was once the main street of Incheon but is now a nearly forgotten backwater. The locals are trying to keep their community alive and also retain its soul. Some of their responses have been a little cutesy for my liking but I'm old.

Second, looking at the English language section of a used book store in korea is a great way to see forced connections between ideas. Books on Biblical subjects are next to one on traveling Ireland by mule-cart (these two concepts were in fact closely related), beautifully illustrated covers for Spanish and Vietnamese (they used a sort of European alphabet) are mistakenly stacked in this area because the text looked close enough, cooking is next science fiction, middle books in trilogies sit alone... Chaos in its third purest form!

Alright, I walked from Dowon station to Baedari Bookseller's Alley and saw this Wooden Knight on my way. There was also a sad robot. Closer to Dowon, I walked through 'Culture Street' with many artforms on display. 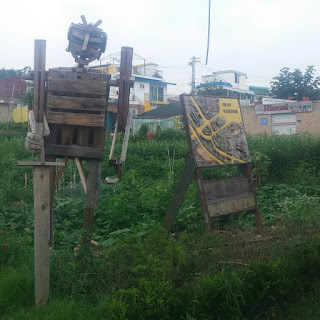 As I wrote earlier, the neighbourhood is not what it used to be. The signs below tell locals to STOP the new improvements to the road that will destroy homes. This article from KoreaBizWire describes how a TV show had been set in the area and brought new life to it. For a little while, at least. 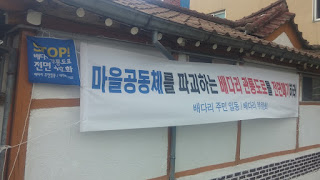 There seems to be a lot to do in the vicinity. 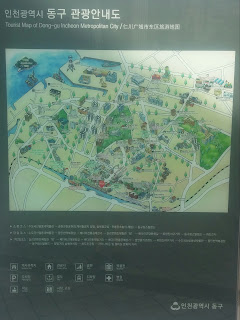 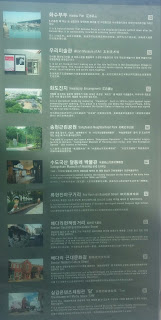 Cafe Oasia is in the middle of Bookseller's alley and there are several store on either side. This place seems more of a 'browse and choose books' than 'buy books the meter' as it seemed in Busan's used book store district.

Posted by Surprises Aplenty at 6:08 AM