Via Kottke, the 2017 Bulwer -Lytton Fiction contest winners have been announced. Some of the Dishonorable mentions: 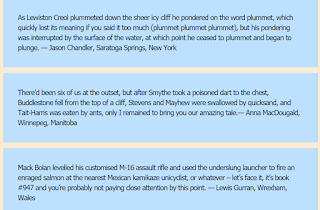 Follow either link for the winner.
---
A different sort of winners - of The Hugos, can be found here.
---
Also from Kottke, an archive of Soviet Children's books. Why study Soviet children’s books? In the selections featured here, the user can see first-hand the mediation of Russia’s accelerated violent political, social and cultural evolution from 1917 to 1953. These conditions saw the proliferation of new styles and techniques in all the graphic arts: the diverse productivity of the Russian avant-garde, photomontage, experimental typography, and socialist realism. As was clear both from the rhetoric of the arbiters of Soviet culture – its writers and government officials – the illustration and look of Soviet children’s books was of tantamount importance as a vehicle for practical and concrete information in the new Soviet regime.

---
Via Boingboing, Comic Parchment is a new font you can buy.
-
A free Arabic font can be found here.
---
I am paying more attention to art forms I didn't much care about a decade or two ago. Painting is one. Here is an article on Picasso's change in style as seen in self portraits.
---
Despite my increased sensitivity to art, I don't really see this as art.
---
In the course of writing a Science-fiction books, Rob Reid interviewed various thinkers for background information. Not all of those details made it into his book. But they did make it into his podcast.
---
My handwriting is terrible. This might as well be magic.
---
Another attempt to answer, "Where do ideas come from?"

Posted by Surprises Aplenty at 6:50 AM