Music of my youth, and a little more recent: Africa by Toto

I suspect it is just nostalgia that drives me but I am becoming more interested in music, and especially lyrics, these days. I hope to write about one song a week a while. I would not describe my musical taste as discriminating and many songs I am thinking about are obvious. Probably the others are banal. But they are my musical choices; make of them what you will. 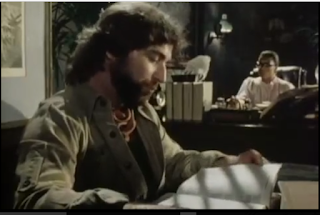 A still from the video in the first link below.

Today's pick is in the obvious category: Toto's Africa. That site continuously plays that one video. I didn't expect books to play such a large part in the video.  Again, I've been thinking about music more lately, but this post on Salon convinced me to put fingers to keyboard.


[Verse 1]
I hear the drums echoing tonight
But she hears only whispers of some quiet conversation
She's coming in 12:30 flight
The moonlit wings reflect the stars that guide me towards salvation
I stopped an old man along the way
Hoping to find some old forgotten words or ancient melodies
He turned to me as if to say "Hurry boy, It's waiting there for you"
[Chorus]
It's gonna take a lot to drag me away from you
There's nothing that a hundred men or more could ever do
I bless the rains down in Africa
Gonna take some time to do the things we never have
[Verse 2]
The wild dogs cry out in the night
As they grow restless longing for some solitary company
I know that I must do what's right
As sure as Kilimanjaro rises like Olympus above the Serengeti
I seek to cure what's deep inside, frightened of this thing that I've become

Huh. I don't think it is the lyrics that sold me on this song. Most recently, it was this version, which is an acapella and a somewhat novelty take on the song. What do I remember from this song?


The sense of a quest is entirely absent in my recollection. The drive to make a choice, to correct a wrong or personal demon is new to me as I read the lyrics.

There seems to be 'just enough' detail. A wannabe traveller like myself might want more detail and perhaps a more specific location than the second largest continent. I wonder if the song would do so well as "Tanzania" by Africa? ... Now checking that Kilimanjaro is in Tanzania... Anyway, the Serengeti is more than two hundred kilometers away so it would have to be a very clear day for the mountain to rise over it. Aside from that name, the atmospheric words are rain, wild dogs, drums and ancient.
I am  a socially awkward sort so this song has taught me more about 'wistfulness' than any other source.

So, ah, what is 'solitary company'? Romantic time? Are wild dogs all that romantic?

Time to enjoy this song again after finally paying proper attention to it.
--
I plan to look at You're So Vain by Simon, Windy by Association, and The First Cut is the Deepest, probably by Cat Stevens. In less obvious, more personal territory, Cinderella by Doug and the Slugs.  I should add something from the J Geils Band and even the Nylons as well. Maybe a song from Ian Bell....

Posted by Surprises Aplenty at 8:12 PM