I'm not sure if the exclamation point is explicitly required but the title is the new marketing slogan of South Korea's federal government.

The government has adopted “Creative Korea” as the new national slogan of Korea.
The new slogan integrates values of Korea coming from traditional and contemporary culture and suggests a direction for the future, the Ministry of Culture, Sports and Tourism (MCST) announced Monday.
“The new brand slogan embodies the values Korea pursues. We will rediscover the creativity inherent in the Korean spirit and raise the national image internationally,” Culture Minister Kim Jong-deok said at a press conference.
The ministry has been working on rebranding the national identity since 2015, the 70th anniversary of Korea’s liberation.
The previous slogan, “Dynamic Korea,” was created around the time of the 2002 World Cup. 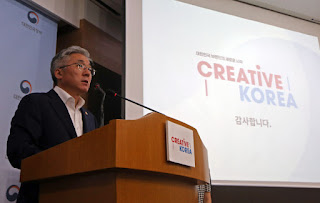 It is common for ex-pats (like myself) to mock Korea's attempt at English branding.  It is very easy to see the flaws in another country and not so easy to see those of your own.  With that caveat in mind, this slogan feels like a wish for Korea rather than a true description of Korea's character.
---
Added Later:
Should the slogan be "Plagiarizer Korea"? France apparently has a very similar slogan. 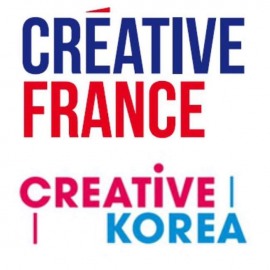 Image from The Korea Herald.


The government agency also noted that the purposes of the two logos were different, with the Korean one intended to promote national vision and the French one aiming to attract overseas investment.

The new slogan and logo were created following nationwide polls the government conducted among citizens who were asked about keywords that represent Korea. The government said that they had spent about 3.5 billion won ($2.99 million) on the project.

The new brand replaces various logos being used by government agencies for different purposes. Among them is “Dynamic Korea,” a logo used by the country since the 2002 World Cup hosted by Korea and Japan.

Experts said the fundamental question came down to originality.
“The standards for design plagiarism are always vague. But on the perspective of the design only, it cannot be viewed as having been plagiarized as they use different shades of the colors and in different fonts. The question should instead be whether the new brand is as creative as it claims to be, as it definitely resembles one of that of France ... a copycat, if not plagiarized,” said a Seoul-based designer who wished to remain unidentified.

.
Posted by Surprises Aplenty at 7:59 AM