Where to find creative inspiration.


13. Children
Children are the most creative people. Pay attention to what they do and say and I am sure you will come up with something to write about.
14. Dreams
Write down your dreams. Some of them may become part of a fiction novel later on.
15. Google
Check out what people are searching most. What are they curious about? What do they want to read about?

---
I have completed Nanowrimo three times and am currently working on Camp Nano, a July event. I use the word 'complete' advisedly.  Let's leave outside opinion where it is and stick to my feelings: I feel I have good settings, good plots, and interesting characters (although I am probably weakest here) but I started writing without an ending in mind.  The three stories still have no ending.  On my 2014 Nanowrimo, I wrote the start to a steampunk story set in Nepal and moved without difficulty through 50,000 words....but the story had no ending.  In 2015, to solve the problem, I set my next story twenty-odd years later with the the hope that I will fill in the gap.  And to some extent, I have.  In the second story, I introduce a character with prosthetic limbs, but at the current end of book one, the character is entirely able bodied.  S/he must have lost some limbs in a great battle.  There are a few other points like that, but the story remains unfinished.

All of which is a lead up to an article about GRR Martin and Robin Hobb on Buzzfeed.


On their first stories.

“I never finished any of my early stories. They were all beginnings, an endless number of beginnings.” – George R.R. Martin

“I was dressed up as a witch for Halloween, and wanted to write a story about my black cat before I went out trick-or-treating. I think it went out with the trash the next day.” – Robin Hobb

“The best writing advice I had was [in] ‘Heinlein’s Rules for Writers’ by (American science fiction author) Robert A. Heinlein. His first rule is that you must write, and I was already doing that, but his second rule is, ‘You must finish what you write,’ and that had a big impact on me.” – George R.R. Martin


“I’ve been very lucky. There were times when I was afraid I would never sell another book, but I never doubted I’d write another book.” – George R.R. Martin

---
An English Language radio station in Busan, South Korea has a photography contest. I only have a link to their Facebook page.


The 'On the Road Busan Photo Contest' is BACK! And this time, we wanna see your FOOD PICS!
Follow the link:

https://www.facebook.com/ontheroadbusan/…
LIKE~~ SHARE~~ UPLOAD FOOD PICS
It's that simple! And this month the prize is BIGGER than ever~!
The GRAND PRIZE includes:
Brunch for 2 courtesy of Haeundae SmokehousePizza & beer for 2 courtesy of 고릴라 브루잉 - Gorilla Brewing Co.Dinner for 2 courtesy of PF Changs in Centum City Mall
PLUS ₩100,000 culture vouchers & a Yacht Tour for 4 people courtesy of Samjoo Diamond Bay!
Runners up Prizes include gifts from DH Beauty Academy, a selection of vouchers from our sponsors and much more on top!

I like signal boosting my friends & fellow creatives, but it's interesting to see how many fall into the assumption that I'm obligated.
— JRD Skinner (@JRDSkinner) July 5, 2016

There are dozens of websites and SEO experts out there all eager to tell you how to promote your creative work.  I definitely do what I can to promote things I find valuable.  It isn't something you should expect, though.
---
The 'secret' to success. A commencement speech at the Academy for Software Engineering.


I am here to tell you that the secret to success in your career comes down to three things, take risks, work hard, and get lucky.

To some extent, the latter two points are similar.  The way to have good ideas is to have lots of ideas.
---
Unpleasant Design is a bully about design that dictates usage to its patrons.  The standard example is a long public bench that has 'arm rests' every so often so that it absolutely cannot be used to lay down on (BTW, I wanted to say, "...cannot be lain down upon" and am not such if what I did write should have been "...to lie down on".  Lie/lay are a tough pair to figure out.) One problem is, undesirable people who want to lie down and rest are not made invisible when benches like these appear.  They simply go to other places so you now have more undesirables in a single location.  Working on problems like homelessness would go a lot further and would be needed no matter what is  done with benches.
---
Conflict in your story 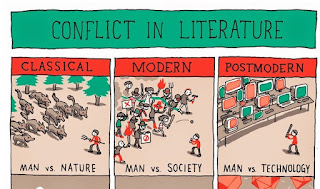 Image is from Incidental Comics, look here to see the rest of the image.

K.M. Wieland discusses writing about conflict in a story. She suggests that two groups fighting isn't conflict; what their goals are and how they become obstacles to each other that is the conflict. She also recommends not simply telling people about the conflict but showing it.


Proper scene structure looks like this:
Scene (Action)
1. Goal (Character wants a smaller something that will help him gain his overall story goal.)
2. Conflict (Obstacle prevents character from gaining his goal.)
3. Disaster (The obstruction leads to a whole new set of problems.)
Sequel (Reaction)
1. Reaction (Character must reflect on his new setback.)
2. Dilemma (Character must face the new set of problems created by the disaster.)
3. Decision (Character comes up with a plan for a new scene goal to help him gain his overall story goal.)
When all your scenes are focused on a specific mini-goal designed to help your character gain his overall story goal–and that goal is then met with a specific obstacle related to or empowered by the antagonist in some way–then your story conflict will never stagnate. It will be organic and powerful. Your characters will never need to spend their time pacing the room and thinking about the conflict, because they will always be driving it forward.

---
What should you cut from your writing?  Adverbs, needless words and cliches. Find out why at the link.
---
Hmmm. Seoul apparently has a Book and Culture Club. A recent talk was recorded and can be found here.