I've written before that I am having trouble making myself sit down and write  my book.  Making a blog post, on the other hand, seems easy enough to commit to. Sci Am has an article on teaching grit and other social or 'non-cognitive' skills.


No one questions that building skills such as self-control, perseverance and conscientiousness can help children thrive. A 2011 meta-analysis of 213 of the best evidence-based SEL [Social and Emotional Learning] programs found that they led to significant improvements in social and emotional skills, behavior, attitudes and schoolwork. “It's what people want for their kids,” notes developmental psychologist David S. Yeager of the University of Texas at Austin. But some researchers, like Yeager, who study noncognitive traits, are expressing real concern about the trend to test them and hold schools accountable.

For one thing, tests that measure qualities such as grit and persistence were designed for use in research settings and not as part of a high-stakes measure of student growth and school performance. “They weren't created for this purpose,” warns Angela Duckworth, a psychologist at the University of Pennsylvania who developed a widely used eight- to 12-question test called the grit scale.

The closest I have come to Social and Emotional Learning is in teaching my ESL students to write notes thanking, complaining or complimenting a person.  My lesson was on how to write in English but the process of writing such a letter - especially thinking about specific points to mention -  I think encourages such learning.

I used a textbook at a university that was written and published in-house but with no input form those of us that would actually teach it.  The book finished with a page or two where students were instructed to write down their regrets.  I went out of my way to have the students learn how to express their regrets but finish the semester with things they were proud of.  In such a way, and a few others, I try to work in some of the lessons I learned from Marc Helgeson on Positive Psychology.

Still, although students should be able to assess their own emotional leanings and predilections,instructing the teachers to assess them for their 'permanent record' is problematic.  As with other attempts to quantify creative items, they are hard to measure and can even give reversed scores:


Another serious problem with holding schools accountable for noncognitive learning is that progress can be hard to assess. Schools that provide strong social and emotional development tend to produce more self-critical students, who will rate themselves lower on SEL questionnaires. “It's just the humility that comes with expertise,” Yeager explains.

As an attempt to segue from one article to another, having grit means being able to work through failure. But perhaps also deciding when something has failed and moving on to a new subject. And now some excerpts from an article on Google's X division which looks for ideas that 'failed to fail' The New Yorker has some sort of 'copy and paste blocker' so here is a screen shot. 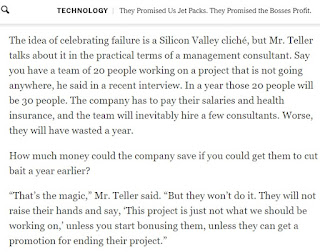 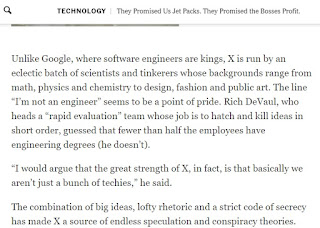 Posted by Surprises Aplenty at 7:55 PM