Evaluating your teaching of ESL writing.

Choose a short writing activity; something that produces at least 1 or 2 paragraphs of writing. Run this activity at the beginning of the semester and at the end of the semester. In this sample lesson plan I use a short video.
Step 4 Collect Writing
After students have finished writing, collect their work. Keep it in a safe place until the end of the semester.
Step 5 Repeat Assignment
Around week 13 of the semester, I repeat the writing assignment. This gives me a little time to read the new and old student writing and make a few notes that highlight differences before final exams.

At the link, you can find more information, including a suggestion on warning/reminding students what they should think about in their writing.  This is something that took me a long time to learn.  I remember spending an hour of classtime looking at metaphors and similes, having the students make their own examples and then telling them to write a story for me.  None of the stories handed in included metaphors or similes!  "Write a story" is not enough!
---
Writing and OCD


In fact, much of what we celebrate as genius has a certain obsessive-compulsive quality, nowhere more discernible than in the lives of writers, who possess the rare gift of being able to articulate these forces of creative compulsion with electrifying clarity.


To write is to pour one’s innermost self passionately upon the tempting paper, at such frantic speed that sometimes one’s hand struggles and rebels, overdriven by the impatient god who guides it — and to find, next day, in place of the golden bough that boomed miraculously in that dazzling hour, a withered bramble and a stunted flower.


“I don’t totally believe in the very specific back-story. It never really helped me as a writer. I don’t think it helps in movies either. They’re always talking about backstory, backstory, backstory and you can’t express it unless it’s completely boring exposition.”
“It’s sort of the author’s right not to reveal how much of a character is him.”
“I don’t really manage my time. I really just wait until I’m inspired to do something. And when I’m inspired to do something, it just happens. I know it seems like a lot, but, you know, a movie takes three months, right? And during that time you’re sitting in your trailer a lot. So I’ll learn a song on the banjo or maybe I’ll write an essay if it comes up. But only if it comes up.”

---
What is procrastination and how can I fight it?

"It's so frustrating because even though I know how it works, it's really hard to stop doing it." 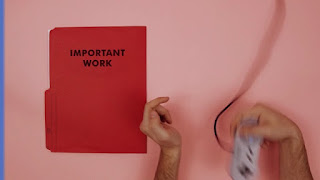 The best, but not perfect, answer was meditation, specifically 'mindfulness meditation'. That's inside quotes because I don't know the difference between types of meditations.
---
I don't know if sabotage fits with the theme of creativity but creative people are more morally versatile. Whatever the case, the CIA's textbook on Simple Sabotage is available at Amazon. And Holy Shoot, the US version is a third the price of the Canadian version. Ah, the book is devoted to teaching a manager to detect sabotage - people who schedule meetings at inappropriate times, for example, rather than a Phun Philes document on how to make explosives. Ah, apparently Phun Philes are a relic of a simpler time, a time of Commodore 64s and the secret copying and sharing of 3.5 in floppy disks. I cannot find a current link. Briefly, it was a document explaining how to make explosives and such.
---
The blank page is a scary sight.  Limits are fun and allow turning activities into games. Play Anything is a book on gamification that I now want.
---
The thousand most common words in English are a useful thing for ESL educators to know. 300 of them are in this book with useful drawings explaining them.
---
Maps, a twofer.
Jerry Gretzinger has been inventing a map for the past fifty-odd years.


The map is never finished. In the morning, when Gretzinger draws a card out of the deck that sets his task for the day, sometimes that card says "scan". That means a portion of the map is scanned and archived, and the copy is reworked to "upgrade" that part of the map.

-
Generate your own random fantasy map.


I wanted to make maps that look like something you'd find at the back of one of the cheap paperback fantasy novels of my youth. I always had a fascination with these imagined worlds, which were often much more interesting than whatever luke-warm sub-Tolkien tale they were attached to.

---
Magic Spells inscribed on tiny scrolls of gold and silver.


The fragile, golden and silver scrolls - which once unrolled look like rectangles of foil similar in size to a sweet wrapper - may never be fully understood.

---
A drum beat generator. Ah, actually isolated drum beats from existing music that you can reset the beat on.
---
I have a new blog feature creating stories from click bait titles.  It turns out, such titles are of value beyond blog posts.  They work for scientific journal article titles too.


It turned out that articles with positive framing and phrasing arousal in their titles received higher Altmetric scores, meaning that they were shared more widely online. In contrast, having wordplay in the titles actually lead to lower Altmetric Attention Scores, while having a question in the title made no difference. This is independent of the length of the title or how interesting the topic was.