I like the research but think I would choose the nap over the idea.

I feel that I run at full speed or I want a nap. I fear that I sleep too many hours a week.

So the possibility of using sleep to find creative insight was encouraging to me. Do something I am nearly addicted to and get a benefit from sounded too good to be true. ... And it is.

“You must seat yourself in a bony armchair, preferably of Spanish style,” he wrote. In your left hand, you were to clench a heavy key, suspended above a plate. Then, he continued, “you will have merely to let yourself be progressively invaded by a serene afternoon sleep, like the spiritual drop of anisette of your soul rising in the cube of sugar of your body.”

As you drifted off, the key would slip from your fingers and clang on the plate, awakening you. He claimed the brief moment spent between wake and sleep would revive your physical and psychic being. And he cautioned that “a mere second is infinitely too long.”

So an important point here is that it is not sleep nor dreams exactly that Dali was trying to access but the unfocused thoughts of a person nearly asleep.

I want to try this technique but also trying to put yourself to sleep and then not sleeping sounds like taking sex almost to orgasm and then stopping to get back to some more mundane activity. Yes, I may have a problem if my analogy for sex is sleep.

Anyway, if there is a way to strongly encourage creative thought, this seems to be it. It is not magic and in the experiment described at the link, it only made the participants more likely to solve the problem; not certain to do it.

Those who slept for longer periods actually did worse than both those who briefly slept and those who stayed awake.

Posted by Surprises Aplenty at 6:51 AM No comments:

(bad) seeds of thought about inspiration

Some of the lyrics from the Nick Cave and the Bad Seeds song, (I'll love you till) The end of the world.

Some things we planWe sit and we invent and we plot and cook upOthers are works of inspiration, of poetryAnd it was this genius hand that pushed me

This is how creativity and inspiration appear to me these days. That genius hand can start pushing any time now...

Posted by Surprises Aplenty at 12:21 PM No comments:

From University of Chicago.

As a scholar, he is best known for creating flow theory—a state of being in which people become so immersed in the joy of their work or activity “that nothing else seems to matter.” He outlined the theory in Flow: The Psychology of Optimal Experience, a seminal 1990 book that influenced leaders from politics to sports.

“Mike had a genius for creating simple, generative models of flow, creativity and aesthetic experience, and then unfolding their implications in his writings; the impact of his ideas has been remarkably broad,” said Jeanne Nakamura, an associate professor at Claremont Graduate University, where Csikszentmihalyi taught after retiring from UChicago in 1999.

“He was the best example of the things that he studied about the life well lived.”

Which suggests to me that in studying FLOW, he also lived it.
Wikipedia also has an entry about him, of course.
I first learned of his death from Boingboing.
Posted by Surprises Aplenty at 7:33 AM No comments:

Hi there. Already thinking about Christmas

I want to make a wind up toy where when you turn a crank, the sleigh and reindeer rock up and down as if surfing the wind and clouds.
I worked out the basics here. 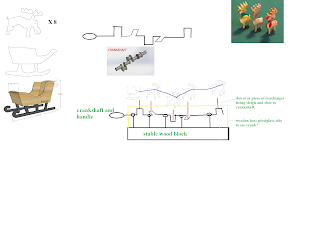 And this is where I am today.

I used the paper to measure how much room I will need for the base. More than  two feet! It is a big prototype!

And what would it look like with a cute dinosaur in Rudolph's position?

Posted by Surprises Aplenty at 9:34 PM No comments:

Still alive and thinking about creativity

Although the pandemic is ongoing, I have been busy at work, even managing some creative activities. I have on occasion been wildly creative and also lucky with my creating but mostly just doing my job.

Still, here is an interesting article about curiosity. 5 Dimensions of curiosity.

This sounds a little like how my own blog started but in a more serious way:

For over 20 years, I have been studying curiosity. I didn't plan to be a curiosity researcher.

The following five categories are well explained at the link - I have removed the explanations to encourage your reading the original material:

We found overt social curiosity to be linked to healthy psychological outcomes including open-mindedness, extraversion, agreeableness, low negative emotionality, interpersonal competencies, and low levels of loneliness. With covert social curiosity, information is gathered by surreptitious routes such as gossiping, snooping, spying, and other indirect means of discovering what other people are like. Covert social curiosity was linked to much less adaptive psychological outcomes such as a motivation to avoid errors and mistakes in the workplace, and a tendency to complain to friends, family, and co-workers.

The discussion here on curiosity is also interesting.

Posted by Surprises Aplenty at 8:56 PM No comments:

At least playing at fighting CoVID anyway.
First, a Christmas craft, a way to scent drawers or closets. The result looked surprising like abstract images of the virus. 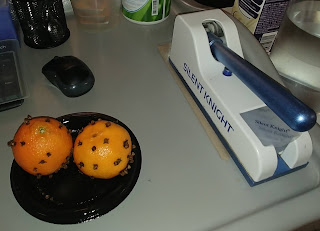 And that led eventually to adapting a game to play at beating up the virus.

For recreationists, this is a game I adapted for Long Term Care Residents. Some key points here are the limited mobility of my residents and reducing the amount of work I need to put into actually running the activity. So as my pictures show, the game is called Balloon Tennis and the residents are in a circle around a balloon tethered to the ceiling. They smash at it and it never travels fast enough to harm anyone and never needs to be picked up by me when it goes over the shoulder of a player. The balloon has a little water in it to give a little more weight.

So first I wrote "CoVID" on the balloon and glued a few 'spike proteins'. 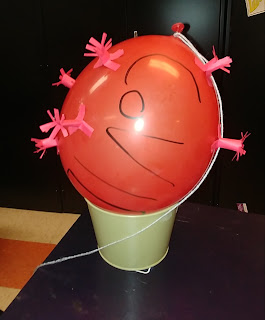 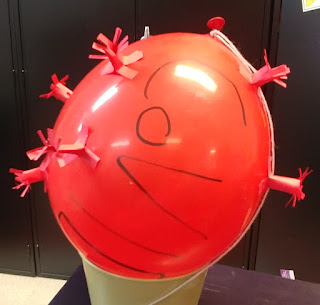 I hung it from the ceiling. 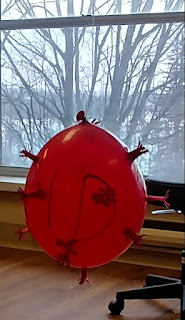 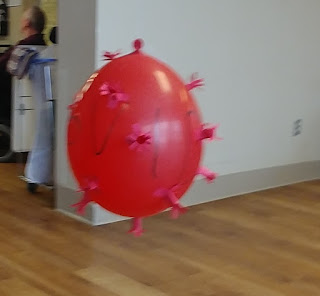 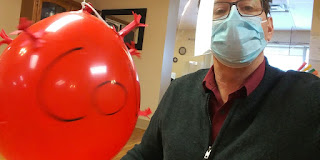 I was struck by the idea of performance art and if we were beating the virus, how would we do it? Well, by using Vaccines, Masks, Hand Washing and Social Distancing of course. 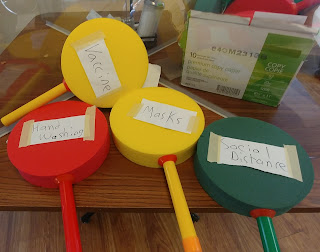 And so my residents beat the heck out of CoVID that day. And since we have been lucky and careful, we don't have actual cases of the disease at our Home to make the game morbid.

Posted by Surprises Aplenty at 8:33 PM No comments:

A text only post as I didn't think to take pictures while working.
My mother has a brass bed frame and some of the bolts that hold it together are loose. I will write a little about my repairs if I think I can make them clear and interesting - enough to explain my thesis, anyway. That thesis being, unskilled repair people have to be very creative indeed to solve problems they didn't understand when they arrived at the problem.
One part of the challenge in describing the event is also the problem with being unskilled. When I discuss 'fasteners' it is because I have no idea what the name of the actual part is. I also don't know if this name is common knowledge and to save time I will just say 'fastener' rather than describe in detail - which would also be painstaking and awkward as I lack that vocabulary as well.
Here is what happened. My mom's brass bed frame was coming apart at the junctures where pipe met pipe. I found the whole thing was kept together by 'headless-threaded bolts' perhaps fifteen cm long. At one end, a decorative brass globe screwed on. But inside the pipe was a fastener that had been pushed back quite deep into the pipe, far beyond what the bolt could reach. My first thought, having lived in Asia for many years, was chopsticks. Some disposable chopsticks we had at hand had a lump at one end so I pushed the stick past the fastener and pushed up on the fastened while pulling back. I think I had some success but mostly I pushed the fastener as high as it could go and it stuck in place. Then I got needle nose pliers and they were now long enough so I could pull the fastener out, learn how it worked and replace it. I threaded it on the bolt and tried it in the hole.
But now I couldn't remove it. These fasteners went in easily but were hard to pull out.
Alright, let me try to describe them; they were basically domes with a hole in the centre. Huh; that was easier than I had thought. You put the dome in the pipe so it was concave to the opening and it went in fairly well but was hard to pull out.
So now I have to push the bolt, already connected via the dome-fastener to a pipe, to the main bed frame. But of course the frame post was slightly twisted so I could not just push it through. I needed to twist the main post, slide the bolt through without knocking it deeper into the pipe and fit the decorative end on. Three hands were clearly needed.
On my third try, holding the pipe in my hand and my fingers on the bolt, I used my other hand to twist the frame post and slide it on... and succeeded! I quickly put the decorative end on and was done!
Nope.
Time to look over the rest of the bed. It seems the bed frame was three inches longer than the mattress. and the angle-iron mattress-holding part of the frame was loose where it contacted the brass.
I cut a two-by-four into three inch lengths, then cut gaps about an inch deep into them for the bolts holding the iron to brass fit. I tried to tighten the iron frame to the brass with my fingers.
Nope.
I couldn't find a wrench head the right size. So I opened a ratchet set my father had given me nearly forty years ago and used it for the first time! Thanks, Dad.
So I was able to tighten the parts of the frame together, tighten the brass piping, and even clean under this bed for what appeared to be the first time in months.
Someone who knew what they were doing would have taken ten minutes, I think. They might even had pushed the dome fasteners deeper and used fresh ones as that would probably have been better time/money efficient than salvaging the original ones.
My creative exploration and journey took over an hour and included, among other things, balancing a flashlight on my shoulder so that the light was a eye level to look down the pipe while also holding that pipe and probing it with a chopstick.
And I think this is the big lesson; naïve creative work can complete a job as well as experienced-step following work but it will take a lot longer.
Posted by Surprises Aplenty at 10:52 AM No comments: