I have just moved to Canada and am busy setting up, well, a life here. I have a phone and pick up a car tomorrow... You might not care. Among other things, few private homes have unlimited internet use and I have held back on my surfing habits a little.

The means I want to share a lot of Quora today.
Is technology damaging our creative skills?
Creativity and youth
Creativity: nature or nurture?
---

Posted by Surprises Aplenty at 5:15 PM No comments:

Steve Schoger explains and demonstrates fixing the design of a user interface. This is the sort of lesson I need. I am the sort to make a workable device with cool features but without obvious design or planning for how it will be used.
---
Never state what you can imply.
---
Scalzi is socially conscious.
---
Taking notes on how Stephen King writes. Each of the points below has examples and discussion that I snipped. Follow the link for all the details:

Stephen often writes about the antagonist and the protagonist. He follows both stories....
He dedicates chapters for character development. ...
He ends most chapters with a cliffhanger. ...
He shortens his sentences when there is action....

---
Writing prizes for Canadians, by the CBC.
---
I have Scapple, made by the same people who make Scrivener, the word processor that writer's rave about (as a wannabe writer, I only mention - it takes a while to learn how to use).  Ah, back to Scapple. It is a sort of mind mapping program. I am not sure how to use it efficiently - drawing such things on paper feels more natural for me. My internet friend Gord Sellar found a good use for it.
---
Youtube series on history of science fiction writing. This is the most recent video. These videos run 6 to 9 minutes.


These 16,016 BBC Sound Effects are made available by the BBC in WAV format to download for use under the terms of the RemArc Licence. The Sound Effects are BBC copyright, but they may be used for personal, educational or research purposes, as detailed in the license.

---
Surviving Creativity is a podcast by a trio deeply involved in making comics. The most recent podcast is about how superhero movies have made billions but super hero comics have not profited much thereby. The discussion is a deep dive into the subject and Scott Kurtz is upset. The main point I took from this episode was that creative businesses need to innovate constantly. Comic book distribution has not done so in the US.
---

A life in one box.


I am flying to Canada, leaving Korea. Maybe I will return to visit.
I am taking my dog. There goes one piece of luggage.
Judging from what I have packed, my life revolved around clothes.
Not much else in that one suitcase.
Like Facebook, my suitcase does not accurately reflect who I am.
I hope it doesn't.
Posted by Surprises Aplenty at 3:52 AM No comments:

Possibly the most important thing I have posted here. A discussion of (US) taxes for creatives.

This is a good thread to make taxtime more manageable to us wily creative types. I’d also add to start paying ahead with quarterly taxes — you’re actually supposed to, and it’ll diminish the OH MY GOD THE TAX EELS ARE BITING MY FACE end-of-year panic-fear. https://t.co/b12ZvtE8kV
— Chuck Wendig (@ChuckWendig) April 15, 2018


Follow the link to read the thread.
---
5 steps to making compelling characters
---
Traditional vs self-publishing
---
Scrivener 3.0 (a feature rich word processor for writers)  is out. Should you get it?
---
two kinds of real estate in comics making. 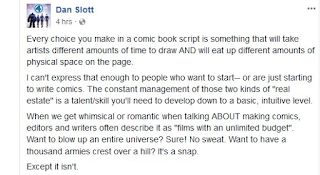 I sometimes have difficulty in embedding tweets the way I want to in my blog. Above is a chunk of the advice - if the full Tweet didn't embed, follow the link.
---

Posted by Surprises Aplenty at 8:17 AM No comments:

Posted by Surprises Aplenty at 1:48 AM No comments:

Numbering is different in the original.
---
An interview with PC Hodgell (Youtube link but interview is exclusively audio).
---
Harsh truths from famous writers.


16. Get through a draft as quickly as possible. Hard to know the shape of the thing until you have a draft. Literally, when I wrote the last page of my first draft of Lincoln’s Melancholy I thought, Oh, shit, now I get the shape of this. But I had wasted years, literally years, writing and re-writing the first third to first half. The old writer’s rule applies: Have the courage to write badly. – Joshua Wolf Shenk
17. Substitute ‘damn’ every time you’re inclined to write ‘very;’ your editor will delete it and the writing will be just as it should be. – Mark Twain

---
Thousands of out of print sewing patterns.
---
Crib Sheet for journalists (ESL edition).
---
Tiny Desk Contest (maybe for hedgehogs but also for American musicians)
From the rules:

---
Maggie Stiefvater discusses College or Not?


Nowadays that means that my past novels are paying my mortgage while my current project is paying future bills. But back then, it meant I was happier having another job while I worked out getting published.

And, I mean, biologist sounds like a good job.
This has gotten very long and it’s all saying essentially the same thing: don’t let WRITER be your identity, even if WRITING is your ultimate job. Don’t conflate FOLLOW YOUR DREAMS with IGNORE COMMON SENSE. Don’t believe that somehow putting aside your writing to get a degree in Zebra Husbandry means you have abandoned your true self. Don’t think about a ticking clock, think only about forward movement. Pursue whatever degree will give you that balance of identity, security, and vivid creative material. Only you can answer which degree fills in that blank.

---
The subject for your next book. You use the letters of your name to fill in the blanks:
A/an A B about a/an C D E to F his/her/their G.
A Keenly Observed Trilogy about a Young Man's Quest to Understand his Sexless Marriage.
Seems quite the melodrama - and this subject would be somewhat easy to write in that I am shy about writing about sex.
---
Plutchik's wheel of emotions. 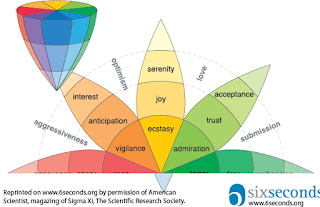 Image cropped. Follow the above link for the whole thing. Via eqjosh.
---
A young artist on Instagram commented elsewhere asking for comment on his/her artwork. I don't consider myself as having discriminatory taste in artwork but it seems pleasant.
---

Posted by Surprises Aplenty at 7:20 PM No comments: