TWIC: the ideal length of a song, science journalism and more

Research showing that Wesley Willis was doing the right thing.
Dang it, I can't find a quote or link, but around the time of Willis' death, discussions of his music lingered over his stubborn insistence that the ideal song was 2:50 long.  In hearing a few of these songs, you note the instrumental solo -the attached autoplay function on the keyboard - extended the songs to the desired length.  Wikipedia is all I got on the guy.
---
Kottke looks at discussions of painter Vermeer.  And also, Song exploder.
---
I look at a place like Adam Savage's workspace and think, even I could make cool stuff there.
---
Boingboing wants you to caption this image of Rick Perry and Barack Obama.
---
Spies need good grammar and consistent referencing styles too.
---
How to do good science journalism. Recommended by Ed Yong on Twitter.


“It’s been a formative narrative media for all sorts of writers,” Diaz said.
The league of ex-gamer writers also includes poet and fiction writer Sherman Alexie; comedian Stephen Colbert; sci-fi and young-adult author Cory Doctorow; Brent Hartinger (author of Geography Club, a novel about gay and bisexual teenagers); George R.R. Martin, author of the “A Song of Ice and Fire” series (who still enjoys role-playing games); and “weird fiction” author China Mieville ( The City & the City).
Others who have been influenced include TV and film storytellers and entertainers — Matt Groening ( The Simpsons), Dan Harmon (Community) and Chris Weitz ( American Pie) and Robin Williams among them.

Posted by Surprises Aplenty at 1:30 PM No comments:


Another, completely irrelevant thing: watching 70s TV was really weird. Nowadays, in a drama, if somebody is going somewhere, there might be a brief shot of them going out the door, cut, they are at their destination. Travel is implied. On the Rockford Files, they go out the door, there is a long lingering scene of the car tooling down city streets or out through the California country side, finding a perfectly open parking space, guy gets out, walks up to destination. Watch it now and geez, you feel like they must really have loved their cars 40 years ago. Half the show feels like an advertisement for Pontiac, or a leisurely travelogue.
But Garner at least made it a pleasant hour.

I've now watched a few episodes of The Rockford Files, and although I didn't notice the driving to and fro scenes as elongated, the whole pace of the show is relaxed; my twenty-first century outlook can handle faster driving and plot (and more violence, in three episodes I saw no blood.  I also saw no attempts to kick guns out of people's hands or other currently accepted-but-impossible tropes).
---
Elmore Leonard on terse writing:


“My most important piece of advice to all you would-be writers: When you write, try to leave out all the parts readers skip.”

A 10-year-old boy, Orlando Serrell, knocked unconscious one day by a baseball, discovered afterward that he could bring to mind the exact day of the week for any date after the accident and could remember the weather for each day since the trauma as well. He could also recall the most minute daily events. 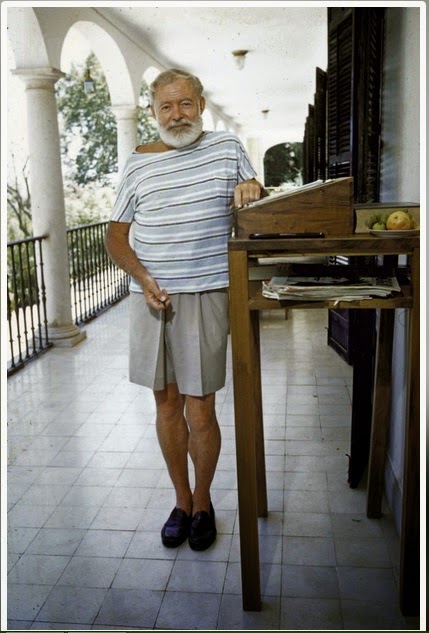 "Ernest Hemingway at his standing writing desk on the balcony of Bill Davis' home near Malaga where he wrote Dangerous Summer" -Life Magazine, Jan 1, 1960

Posted by Surprises Aplenty at 2:49 AM No comments:

writing advice and drafts or revisions as the work progresses?

I can stop with linking to online writing advice now - it is all collected here.  I won't of course, but I could.

I managed to keep to my writing pledge: slightly more than 12,000 words added to the main manuscript, plus about a thousand words of planning, character-sketching, and more.
More specifically, for those interested: I performed major surgery on the outline, improving the manuscript in a way that… well, I’m kicking myself for not seeing this solution to the problem previously. Basically, it helps fix not only structural problems, but more philosophical problems with the story.


I think of Gord as the real deal when it comes to writing.  Years ago, he posted a few things about his writing process, including how he edits his work and he seemed to have the business of writing down.  I mean this in the way my brother-in-law has the business of dentistry down.  Although he is indeed skilled as a dentist, he is also minutely aware of the time management aspects of his work and how to combine quality work with throughput.

Uh, yeah, more than I intended to say about my brother-in-law but the whole analogy works.  I've read only three of Sellar's works but I found them excellently researched and written.

The excerpt above is interesting to me for what it shows of his novel-writing process.  He appears to be working towards a minimum number of drafts and rewriting sections as he goes.  This was a big no-no in the Nanowrimo community.

Jo Walton, as interviewed here (MP3 interview), has a similar approach, attempting a 'no-drafts' style.
Posted by Surprises Aplenty at 6:47 PM No comments:

Colonize Mars, sure, but Venus?  Maybe, says Selenian Boondocks via CityLab.  To summarize their suggestions, the rocky planet would be way too hot but around 50 km up there is a sweet spot of one atmosphere pressure and survivable temperature.  At this altitude, earth atmosphere (nitrogen and oxygen) would float so exotic gases wouldn't be needed.   Pretty cool ideas and I'll be reading more of Selenian Boondocks.

---
I just finished reading Age of Miracles and loved it, reading it faster than any other book this year.  in tone and style, it is quite different from The Road but their tales of the slow collapse of civilization are similar.  Both 'end' but the problems aren't resolved.  As an adult, I definitely understand that real life is like that but I generally don't like my fiction to follow life so closely.  And yet, I liked the story a lot.  It has always been clear that knowing where to start a story is challenging and whether to use flashbacks to extend the timeline backward.  I hadn't really considered the ending to be as difficult to pinpoint.  The evil is defeated, the good guys are on top and ....a wedding?
---
Scientific American introduces the Imagination Institute.


In 2015, up to fifteen (15), two-year grants in the range of $150,000 to $200,000 will be awarded to scholars from around the world. The awards are intended to generate new scientific information in order to further clarify the construct of imagination and its measurement for the purpose of advancing an understanding of the human mind and its role in the optimization of human potential and flourishing. The award recipients will be brought together for a retreat at the conclusion of the program in the summer of 2017 in order to compare the results of their projects and to discuss longer-term efforts at generating an “Imagination Quotient”.

Posted by Surprises Aplenty at 12:57 AM No comments:

First, it was a textbook of sorts for a biology class I'll be teaching this summer.  The book came to sixteen pages including a lot of blanks for students to fill in.  Not a novel or extended work by any stretch.

About those blanks to fill in.  I don't exclusively mean blanks for the addition of one word here and there although such blanks are also there.  No, I left half pages, thirds of pages and even full blanks at the end for notes and diagrams.  This is following Jason Renshaw's example - he left more and more blanks in his texts that coworkers teased him that his next book would be the equivalent of Cages 4'22".

Anyway, it is done.

I am not done with teaching right now, though.  I have a summer class going until July 14, have a few days off then I'm to the camp where I'll use the above book.  I'm enjoying teaching a single class, even if the class is larger than I like. The class is first year, second semester English and my students are taking it for a variety of reasons.  Some had military service interrupt their classes, others might have failed it earlier and others are lightening their course load for the fall semester.  As for me, I am unable to travel far because of my wife and son's schedules so a few hours a day give me some structure.

And, I am testing out a few things for the next semester.  Socrative App is an interesting free app that lets me ask students questions they individually answer.  I'm mostly using it for anonymous evaluation - was I teaching for the last forty minutes or just talking?  Should I review or repeat material?

I am also having students perform an audio relay every other unit.  In the hallway, an MP3 player and battery-powered speakers repeat a few sentences.  In teams, students go out and listen to it, then run inside to record what they heard.  This links in with the speaking and listening exam I am also working on.
Before I go on about the test, I have to tell you about the prizes.  Before the game starts, I tell students that I lived in Yangyang Gun, South Korea and that region is famous for Song-i mushrooms that sell for 300,000won per kilogram (about $300/ kg) and that the prize is song-i.  All that is true.  However, the prize is not song-i mushrooms but choco-song-i, a candy pack that my son likes and cost under a dollar.

As for the exam, it consisted of two parts.  First, students listened to a description of a person while looking at a group of ten people, all with a letter beside them.  They choose the person and write down the letter.  Then they hear a dictation that uses sentences from the textbook - two sentences - and write it down.  In the second, less novel part, they answer questions I ask them.  What I like about the arrangement is that I can ask one student questions while another is also involved in the test, doubling my efficiency.  This is a big deal on a busy day where I might need to interview 50 students and stay alert for their oh-so-repetitive answers.

Nanowrimo has some kind of event in July that I have received emails for but haven't read.  I will not participate in Nano this summer but am trying to make July a big month for personal creativity.  I just finished writing a (tiny) book, will also write two short stories and add 10,000 words to The Distancing Engine - my 2013 Nanowrimo entry - and work on two carving projects.  Also, I will make my classes as memorable as possible.
---
Writing a book doesn't take much energy.  Well, the act of raising and dropping fingers on the keyboard doesn't.


It turns out not to make a big difference which kind of writer you are. If you write straight through without editing, you'd expend about a kilojoule. With a lot of rewrites, you might expend several kilojoules—but you'd need to rewrite every word 10 times to match the energy stored in a single AA battery.


When it comes to storytelling, where are design and technology taking us? “Whatever is next in storytelling, design, and technology, it will always be about rendering emotional transportation—capturing attention and converting it into intention,” says Hollywood producer Peter Guber, CEO of Mandalay Entertainment. “Every story has a call to action.”

Posted by Surprises Aplenty at 6:40 AM No comments: