lateral thinking in the classroom

A Geek in Korea gave this as a test to his students:


Today I did “Petals around the Rose” as a final exam. I presented it as a “Lateral Thinking Exercise”, but they had to fill out a paper based on the activity. We went over the rules, and I put up a dice roller on the projector to let them guess at the answers. As they got better at the game, some of them solved it on their own.

I'm not sure if the link in the quote will carry through to my blog. Again: Petals around the Rose.

Students needed to find creative solutions for the problem and describe them in English.  Some students had a creative definition for 'lateral thinking'.


Some people’s lateral thinking was more like “lateral eye movement” as in, “look at someone else’s solution”, AKA “cheating”. I find this is a common answer among students when trying to overcome difficult problems in classes.

I talk about this kind of thing but don't do it as much as I should.  Nice work, Geek.

BTW, it took me three rolls to figure out the game.
Posted by Surprises Aplenty at 9:40 AM No comments:

Tinkering is like creating, I guess.
Tired of the alphabet?  Alternatives are in the works. And, Students make their own illuminated letters.
Beginners have good taste.  That's why they dislike their own work.
Ben Franklin's organizational skills and questions.
Students should Ask questions.
More Scientific American and Creativity.
Posted by Surprises Aplenty at 9:35 AM No comments:

I'm an Indo-phile and I had heard the name of V S Naipaul but I know little about him.  Amazon has some of his books.  Boingboing recently linked to advice by Naipaul for writers. At India Uncut, we learn those rules.  There are only seven rules so I want to be cautious about excerpting them.

Four of his "Rules for Beginners" emphasize simplicity.  Sentences should be short, don't use big words, avoid adjectives and adverbs and avoid the abstract.  I write too many run-on sentences so I can see value in his advice (this sentence is too long, by his standards).  My sentences, with their numerous clauses and asides, need to be trimmed.  Still, I enjoy reading new words, ones that stretch my vocabulary.  I understand that there can be exceptions to rules; and I will proudly break some of these.

The final rule allows you to moderate the ones above - but only after long ("six months at least") practice.  "You may go beyond these rules after you have throughly understood and mastered them."
Posted by Surprises Aplenty at 9:20 AM No comments:

A friend and coworker of my father's at the OPP had been seconded to bodyguard the premier of Ontario.  This was around twenty years ago and I forget who the premier of the day was.  In any case, they were returning from an afternoon with one of Canada's most famous authors, Farley Mowat.  Mowat had performed some attention-getting thing at the event; my memory of the reported story is hazy so I'll leave out my possibly-libelous guesses.  In the car, after the event, the premier turned to the body guard and remarked something along the lines of 'Mowat could be an ass.'  The body guard wasn't chosen for his political views but reported feeling unusually close to his charge that day and agreed.

Are artists genuinely mentally ill or are they publicity hounds?


For years they perpetuated, without apology, the cliché of the gifted, hard drinking, bellicose writer that gave so much of twentieth-century literature a muscular, glamorous aura. In 1967, after the disappointing reception of his second novel, "Set This House on Fire," my father published "The Confessions of Nat Turner." It became a number one bestseller, helped fuel the tense national debate over race, and provoked another one regarding the boundaries of artistic license. "Sophie’s Choice," published in 1979, won him critical and popular success around the world. Three years later, with the release of the film adaptation starring Meryl Streep and Kevin Kline, that story also brought him an extraliterary measure of fame. Winner of the Prix de Rome, American Book Award, Pulitzer Prize, the Howells Medal from the American Academy of Arts and Letters, and France's Légion d’Honneur, my father was considered one of the finest novelists of his time. He was also praised, perhaps by an even larger readership, for "Darkness Visible," his frank account of battling, in 1985, with major clinical depression. A tale of descent and recovery, the book brought tremendous hope to fellow sufferers and their families. His eloquent prose dissuaded legions of would be suicides and gave him an unlikely second act as the public face of unipolar depression.

For the CBC's The Current, Steven Page, late of The Barenaked Ladies, investigates the connection between creativity and poor mental health, in the process discussing his own battle with mental illness.  Several artists are interviewed about their mental health issues but at least some of the report seems devoted to pointing out that celebrities are always watched more closely and individuals with problems will always stand out.  The large numbers of artists without mental issues aren't as exciting.

One comedian offered a sentence that stood out for me. "Without my medication, my stand up act was scatter shot but with the meds I had a laser focus."  All agreed that they did not need to drugged to the point of drowsiness; the proper mix of medications could remove their symptoms without significant side effects.
Posted by Surprises Aplenty at 2:40 AM No comments:

Sci Am has two articles out in their Scientific American Mind magazine that deal with creativity.  The first discusses the connection between creativity and eccentricity:


The second is a slideshow of ways to cultivate your creativity.  The slideshow discusses general exercises one can follow to encourage creative thinking.  It seems fine but a little more abstract than I prefer.  The slideshow is a little annoying in that for me, the image was low enough that i had to scroll down to see it all, for each and every slide.
Posted by Surprises Aplenty at 10:30 AM No comments:

If you have entered the contest and not made it as a finalist, well Roger Ebert feels your pain.  He has made many entries and finally is a finalist.

Here's an  excerpt from the former link:


I have entered the New Yorker's cartoon caption contest almost weekly virtually since it began, and have never even been a finalist. Mark Twain advised: "Write without pay until somebody offers to pay you. If nobody offers within three years, sawing wood is what you were intended for." I have done more writing for free for the New Yorker in the last five years than for anybody in the previous 40 years.

For the current contest, look here.  And for more from me, look here.
Posted by Surprises Aplenty at 10:22 AM No comments:

Encouragement from the American Elf

Yesterday, the Elf gave us: 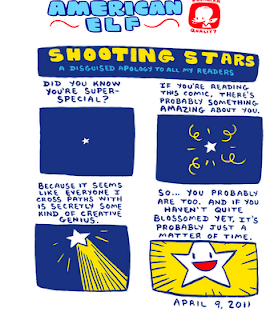 Posted by Surprises Aplenty at 8:09 AM No comments:

what should I wear while writing?

If you are a woman, perhaps nothing.  The Guardian reports that:


Our survey of women writers revealed that only 48% wore "normal" clothes to write in. Two per cent wrote in the nude, 14% wore night clothes and 1% have a "special writing outfit".

The writer, Hadley Freeman, suggests that in addition to the proper selection of writing attire:

... I would suggest this for, to borrow your deliciously romantic phrase, "the aspiring authoress": first, a giant padlock. This is to be draped decorously around the fridge. It's amazing how hungry one gets when one is working from home, and how fascinating heretofore uninteresting foodstuffs become. Eating a can of pickled onions or starting the next chapter? No contest!

Next, a pair of shoes with cement blocks for soles. If you can't find them on the high street, ask a friend with connections to the mafia. Put them on once you have finally watched all the morning TV you can take before suffering an aneurysm and are sitting at your desk. These will make it harder for you to get up and wander around: it is an unexplained but irrefutable phenomenon that for some reason it is only when one has to do any kind of writing at home that one realises how many fascinatingother things there are in one's flat that require reading immediately, such as three-month-old magazines and the backs of aspirin bottles.

Next, maim your left hand. Just smash it with your cement shoes and be sure to injure it in a way that won't impede your typing, but will stop you turning on your wireless or spending another day on the internet reading articles about things you don't care about.

And finally, don't wash your hair for several days and wear the ugliest outfit possible. Perhaps that old maternity dress of your sister's that somehow ended up in your closet? The one with the spaghetti sauce dripping down the front in a pattern that makes it look like you're drooling? Perfect. Put that on. Thus, even if you develop the thigh muscles to be able to walk in your cement shoes (never underestimate the determination of those desperate to procrastinate), this look will definitely keep you from going outside and will secure you in your chair, writing the next great novel. Procrastination is a strong compulsion, yes. But vanity beats all.

Posted by Surprises Aplenty at 7:16 AM No comments:

At Dr Jim's Thinking Shop, there is a contest up to make an Evolution/creationism themed LOLcat poster.  Entries must be sent by April 22, Lethbridge, Alberta time.
Posted by Surprises Aplenty at 7:43 PM No comments:

From Scientific American (the link leads to a stub, the rest is behind a paywall), I learned that as individuals, narcissists are averagely creative but more charismatic so their idea-pitches seem more creative.  In pairs, they compete with each other enough to generate more creative ideas, but as the number increases, their competitiveness harms their creative output.
Posted by Surprises Aplenty at 5:49 PM No comments:

Everyone is creative, until they are told they aren't

Posted by Surprises Aplenty at 12:54 AM No comments:

I guess that's one take-home message from these slides. Austin Kleon offers ten tips for artists.  The first is that nothing is original so its fine to steal an idea.  Hmm, in writing that, I feel like I'm rationalizing bad behavior.  Read his blog post so you will see that I'm not.
Posted by Surprises Aplenty at 5:25 PM No comments:

A big part of being creative is relaxing your inhibitions.  Below are a set of illustrations I made for an ESL class.  Students need to be able to describe activities, use family vocabulary and give locations. 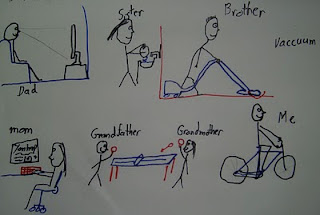 Anyway, the pictures are simple but definitely convey enough information for the students to use them.

I am a big fan of Dinosaur Comics -where the artist uses the image, made from clipart, everyday- and XKCD, a comic made of stick figures.  I think Randall, of XKCD has improved in his drawing, but he keeps his image as simple as possible and still convey his message.
Posted by Surprises Aplenty at 9:13 AM No comments:

Ed Yong, a science writer whose work I enjoy reading, has described his writing process.

Posted by Surprises Aplenty at 6:54 AM No comments:

BBC has an article on the art of the prank.  My own prank this year was a success but not outstanding.  I think this one might have been my best.  That and convincing some co-workers that Korea was following daylight savings and causing one to arrive at work an hour early.
Posted by Surprises Aplenty at 10:35 PM No comments: