Citigroup: What is your strategy at table tennis?

Google: You are climbing a staircase. Each time you can either take one step or two. The staircase has n steps. In how many distinct ways can you climb the staircase?

Capital One: How do you evaluate Subway’s five-foot long sub policy?

Gryphon Scientific: How many cocktail umbrellas are there in a given time in the United States?

Enterprise Rent-A-Car: Would you be okay hearing “no” from seven out of 10 customers.

Goldman Sachs: Suppose you had eight identical balls. One of them is slightly heavier and you are given a balance scale. What’s the fewest number of times you have to use the scale to find the heavier ball?

I often have incredible dreams but mere minutes after I wake up, I've forgotten them.  Why?  Sci Am has the answer.

Also from Sci Am, Laughter leads to Insight.

I sometimes teach writing, but rarely more than a sentence at a time (I'm an ESL teacher, BTW).  I want to teach writing and I am not sure if I write enough myself.  The English Raven has two suggestions and here is the first:


Get to it, start writing regularly and make sure you experience at least as many writing genres and outcomes (and word counts) as you expect your students to tackle;

At Liminality, Charles is busy with his doctoral work.  Here and here, he speaks about the writing process.

Gord Sellar has plans to write a lot this summer. Well, he writes a lot all the time, so I guess he simply has plans for this summer.
Posted by Surprises Aplenty at 5:56 PM No comments:

starting a wall mural with my son 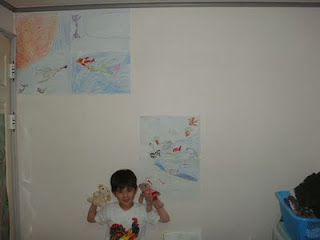 The completed mural will consist of 54 pages: 9 high by 6 wide.  We have started by drawing the upper two-by-two pages.  In the middle is a small scale depiction of what we want the large picture to look like.

I hope we can both learn a little about scale and coloring in this project.  If we add a few pages each day, we could 'finish' in a month.  By then, we might be skilled enough to redo the first few pages.
Posted by Surprises Aplenty at 9:03 AM No comments:

For an entire school year, Dale Price has dressed up in various costumes to wave goodbye to his son as his bus passed their home.  The 180 costumes and commentary can be found here. 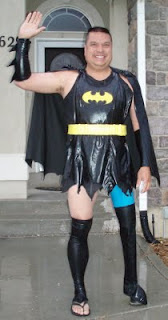 Batgirl was day 160
I admire the planning that had to go into these costumes.  The father wore the "bare bones of his costume to keep his outfit a surprise. Then he’s got 4 minutes to transform, with accessories and props, into a renegade paintball player, a Star Wars character or Terry Potter (Harry’s distant relative)."  (Quote from Yahoo, which calls the whole thing a prank, which confuses me).
Posted by Surprises Aplenty at 8:43 AM No comments:

Another contest and Eco on writing

Umberto Eco has a new book, "Confessions of a Young Novelist" out and Salon has reviewed it.  He might be the most famous author I have followed somewhat but have never read.  I should do something about that.
---
From Boingboing comes another Science Fiction writing contest.  This one looks to write an Asimov-style story about a robot and what it might feel.  The contest is described in full  here.

Some time ago, I wrote about another recent request for submissions.  This was for Machines of Death 2.  I am using all my creativiti, but I can find to hook or start to such a story.
Posted by Surprises Aplenty at 2:48 AM No comments:


He believed in a world government and he was extremely sympathetic to Hitler, Mussolini, and the entire Nazi cause. His stories were filled with caricatures of greedy Jews.

I thought he had been a pilot in World War Two.


I've always heard that children's author Roald Dahl was something of a creep in person, and knew that he had a reputation for doing library visits and conference appearances that turned into antisemetic rants. But this biographical sketch of him at This Recording depicts him as even creepier than suspected -- a cruel, womanizing bully, ruled by lust and petty jealousies. I continue to enjoy his fiction with my daughter (even as I worry about their misogynist subtexts), but it's a shame to learn that an author who's given me so much pleasure and wonder was also such a rotten guy.

Like Doctorow, I still plan to read Dahl's stories to my son, but perhaps I will be examining them a little more closely.

Of course, I have heard the same of other authors.  I enjoyed Enid Blyton's stories as a child, but she wasn't a pleasant person.  From The Telegraph describing a BBC biography of Blyton:

One of the most telling scenes in the film features a tea party that Blyton has organised for a group of her young fans. While the writer makes a fuss of the visitors, her own children are watching from the house where they are locked away from view.

Dickens and Naipaul, too, do not shine in close up:

If Dickens sometimes behaved badly, Naipaul is unquestionably a bad man, notorious for his floridly abusive relationships and bigoted ideas. Does this diminish his work? Naipaul's fiction is not to everyone's taste, but the grace of his prose and the power of his early books, especially "A Bend in the River," is hard to deny; I admired much of that novel even as I gritted my teeth over its blinkered depiction of Africans.

I have heard unpleasant things about Farley Mowat, a hero of mine while growing up.  His evils seems more of excess, of being, or trying to be, bigger than life.

It seems people often become famous for one thing and then their views on other fields are sought, then trouble begins.  It reminds me of the warning, "Don't talk politics with your surgeon."
Posted by Surprises Aplenty at 2:41 AM No comments:

Two of the authors recommend Scrivener.  One of them is Doctorow,who I thought was a fan of very simple word processors.  Perhaps my confusion is due to timing.  I think Doctorow is big on using a simple word processor for banging out ideas without distractions but using Scrivener to determine how it will look in finished format.
Posted by Surprises Aplenty at 9:26 AM No comments: