I taught what was probably my last ESL class in Korea last week. It was a presentations skills class for a multinational technology company. The recruiter, a third party that hired me to teach, might have another class in the next three weeks. Otherwise, I am basically done as an ESL educator. Or at least done in Korea.

But it seems I am not a good boss. I have written the full 50,000 words toward a complete novel four times now with Nanowrimo but I have not completed any of those novels in the eleven months between Nanowrimo festival. I completed a lot of paperwork for my wife's immigration to Canada so that is one thing out of the way. I really do have the time. The next three weeks, even if I do teach another Presentations in English class, have lots of free time to write. This next period is crucial to seeing if I really can be creative professionally.

A few years ago I took an online class in creativity, run by Tina Seelig at Stanford University. In the course she strongly evangelized for brainstorming and I felt (and feel) that the effectiveness of brainstorming is uncertain, maybe even controversial. And yet, when I took the class, I decided to dive in and be as enthusiastic as I could be. Positivity all the way. I needed to make this decision because I knew at the start that the theme was music and that music would be a forced connection to other ideas. I am not a musical person and I knew I had to try, to involve myself. It worked. I had a great time and learned a lot, even that brainstorming has several rules I was unaware of and, as a case study, appeared to be more effective than I had imagined.

I need that positivity now. I am scared of what what will happen in May and I need to be excited about May. Fighting! (A Korean/ Konglish word used as a cheer)
---

Alright, on to some links of creative work to inspire you in This Week In Creativity.

A neural network has made some D&D stuff. The link goes to new animals the program put together, but the programmer or computer or software (I really gotta catch up on terminology) has also made spells and more.
---


I have had difficulty embedding Tweets so here is the image (again?): 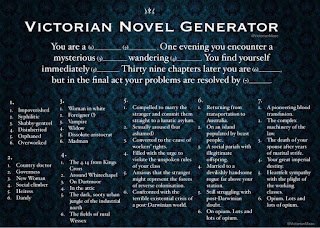 Posted by Surprises Aplenty at 6:27 PM No comments:

Considering a job in the arts field? Ryan North has some words for you:

This is half the comic. Follow this link for the rest.
---
The scientific Paleoart of Dr Mark Witton. A screen shot (click to embiggen):


Greeting cards serve as a reminder that it is often with the clichéd and the ordinary that the fabric of language starts to unravel, and the pulse of life – that which will always remain beyond words – begins to bubble up from beneath

---
I have long been shy about my voice. When speaking something I think important, I deliberately deepen it. I very much suspect it sounds silly but it seems less silly than my normal reedy tones. Here is an article about Johnny Cash's voice just appeared.
---
Ani Alexander interviews Dr Tom Curran about telling stories.
---
Posted by Surprises Aplenty at 8:28 PM No comments:

Humble Bundle has monthly book and game bundles; you pay what you want to get a set of ebooks on a theme or mobile games or computer games and the theme changes each month or so (it might be every two weeks).

They currently have a pretty cool bundle of books and software to help you paint. I am not sure but I think the programs are Windows specific. In addition to Bob Ross ebooks on how to paint, there are a few programs -Corel Painter Essentials 6 and some addition stand out - and even some art-themed games. I will buy this bundle. The minimum price is $15 (US) so it seems like a good entry point if you are interested in learning or playing around.

Bob Ross is more popular now as a meme than he was as a late-night weirdo drawing his 'happy trees' that no one watched. Now he is cool.
Posted by Surprises Aplenty at 7:46 PM No comments:

An artist named Wayno now helps Dan Piraro with the Bizarro comic, one of my favorites.
---
An archive of images of colonial India.
---
Design's lost generation


[W]e enjoy regulations. When they’re in our interest.
This roomful of designers, however, was quite taken aback by the idea that our industry, an industry which now regularly designs devices that go inside human bodies, or control our medication, or is writing logic for putting driverless tractor trailers on the street, should need professional licensing.
Who’ll decide who gets licenced, they asked.

Posted by Surprises Aplenty at 7:51 AM No comments:

My family now lives at my parents-in-law's home until we move to Canada in a few months. While here, I help out a little with farm work - my 75 year old father-in-law often finds me too slow for his liking. We recently dug up 'pig potatoes' tubers and I found this lizard that had managed to survive being buried by the plow - or maybe it was in a tunnel that was cut open - and was hesitant to move. I carried it off the field and took a few pictures.

I think it is Takydromus amurensis but chose not to abuse it further by cleaning it off to examine its scale colours and pattern.
Posted by Surprises Aplenty at 8:11 PM No comments:

I had never considered the money laundering value of fake Kindle books.  Criminals made a fake book - filled with random words but, crucially, using the name of a real author - and then bought it themselves with stolen credit cards. The book's price was set at over $500.  Clean money for the criminal but now the author has to prove he didn't get that money to the IRS or he'll have to pay income tax. Story was twice on Boingboing: one, two.
---
I have only read a few pages of Elfquest now and then, probably from Boingboing links. The 40 year old comic is coming to an end.
---
2500 Japanese woodcut prints available from the Library of Congress. That link goes to a discussion of the art and a few examples. LoC link to the archive.
---
Dazzle camouflage; a creative way to confuse your enemies.
---
Posted by Surprises Aplenty at 5:10 PM No comments: