How to build a fantasy world?

This was a Quora questions I answered and I did some new Google searches so I felt I could/should post it here, too.

I want to start building my own fantasy world. What medium should I use to create it?

Brian Dean, I want to be a writer - but I spend too much time writing about writing here!
Answered just now
What sort of building are you doing? As at least one other answerer did, I immediately thought of, a joke about megatons of rock and water and so on. Let’s put that aside. Do you already have one ‘complete’ in mind and now are wondering how to write about it, what stories fit in it, how to film a movie set there, what the local music would sound like? Or do you have a few ideas and want to get a better picture of this world before doing those things?
Let’s start at end of my last paragraph: You have some ideas but need to flesh them out. I cheat. The following are links to my blog where I offer links to various generators. I will share a few such direct links as well so you don’t have to visit my blog.
‘Generators’ in this case are tools that generate character names, maps, story titles, you name it. I like to use the name generators for secondary characters so I don’t have to waste time outside of the story inventing names for characters that might have three lines if they are lucky.
My blog with ‘generator’: creativiti project
One link there is to a ‘medieval city map generator: Medieval Fantasy City Generator
Another fantasy map generator: Generating fantasy maps
Names for ‘dark rituals’: Seventh Sanctum: the page of generators - random tools for art, gaming, writing, and imagination.
This link on my blog is to some pictures of drifting snow that looks to me like low relief maps: Today's creativiti on the ice
Okay. So now we have a solid set of ideas for this fantasy world. Writing about it in a story is not easy, but is traditional. It might be cool to have ten characters plus a few gossips or news sites report on it in Facebook, Twitter, even Quora and blogs. Kudos to you if you have establish a timeline and post on those sites for a few months and then collect the timestamped results, forming a coherent story only when they are put together. This would be like a conspiracy story but (semi) real or at least intended. If you were lucky, the comments others gave would add colour to your story. If you were interested in this angle but didn’t want to really post on Facebook, more generators are available. I searched for these in the process of answering your question so I cannot vouch for them. Also, they will probably end up on my blog as a new post - Win/win!
Facebook Status Generator
Facebook and Twitter Online Generators
Ad Mockup Generator | AdParlor
This one is for actual Facebook posts, I think: Create a Facebook Post — Free Online Facebook Post Maker — Crello
I wouldn’t be surprised if All effects - PhotoFunia had some useful templates.
Another creative solution would be to make a party with the goal of inventing a full history for your world. This is world building, not publishing: We Imagine a People – Alexander Jaffe – Medium It’s pretty cool so I will provide a lot of quotes. I fear I, and my friends, would not have the interest or endurance to do this whole project:

I’ve thrown a bunch of outlandish birthday parties, but I can’t even imagine having another after this one. Call it a Culture Jam. Dozens of people creating a fictional culture, from the dawn of man to the modern day, told through art crafted with increasingly complex art supplies. It’s kind of a party, and kind of a large-scale collaborative art project. Like life!

From his party invitation:

I have no idea what I’m doing, and I’m dragging you all along with me. We’ll be converting our house into a lo-fi laboratory of art, culture, and alternate history. The party will last all day, and guests will come and go as they please, though my favorite guests will hang around a lot.
The activities will be twofold: 1) party. 2) invent an alternate culture over the course of the day, by creating art from within that culture, building upon the days’ creations so far, using a parade of increasingly more advanced artistic tools….
arriving in the morning, you’ll help form a neolithic culture just beginning to express itself. You’ll craft creation myths to explain the world around you, using basic tools — charcoal cave paintings, crude carvings, storytelling, etc. As the day progresses, the house will accrue artifacts and change shape, as civilization develops in distinct eras. You’ll receive new tools to reinvigorate your work and help you tell the story of the society through the art of its people.

Posted by Surprises Aplenty at 10:05 AM No comments:

Today's creativiti on the ice

I thought the family and I were just going to walk on the ice and look around, get some exercise. We did that and found some rough and smooth patches so we could get some speed and then slide. My son also suggested an artwork challenge. We had three duels; son and I, wife and I, son and wife. None of us managed anything fantastic and I will not tell you whose art you are looking at, but we had fun.  The challenges were boat, helicopter and tree. 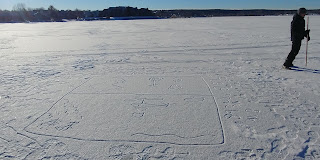 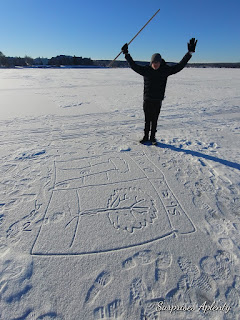 To me, the way the snow drifted and hardened resembled topographic maps. There were low, dark spots with only a dusting of snow over the ice. There were also thicker, brighter areas of thicker snow. The thick areas were larger so they appeared to me to be mainland around lakes with islands. You are welcome to invert the concept so there is dark land surrounded by bright seas.

Posted by Surprises Aplenty at 11:40 AM No comments: