At my university, students need to take a TOIEC test and we professors don't see the results until after the semester is done.  Objectively, their taking -or not- the test doesn't affect me but it does affect their grades and I do what I can to remind them.  Here is one example:

For more professional movie making, look to Gord Sellar.  He needs some extras for a movie he's making and has issued a cattle-call.

We need extras of both sexes — male and female — for Sunday, December 2, in Bucheon City. We need as many people as we can get: if we don’t get enough people, we’re going to have to hire more, which will use up the money we had earmarked for post-production.


We put out a call last week, and got an okay response: about twenty people are coming. But we need more people. If you participate, you’ll be welcome at a party we’re hosting at my place after the shooting is done, with beer. Free beer, until the kegs run dry. We’ll order pizzas, too. And extras will eventually receive a copy of the film on DVD, as well!


We especially need Koreans — or anyone who can pass for Korean — as extras, but don’t get me wrong: we will find a use for you no matter what you look like!


--------
When I engage in FLOW, I lose track of my surroundings.  I remember working on something with my MP3 player going and coming up for air a few times and finally realizing that I had been listening to one song on repeat for over an hour.

I enjoy the background sounds Omm Writer provides.  When I was a student, I used to listen to Doug and the Slugs all the time.  I would be working and focused and take a break, singing along for a moment, then focussing again. D&the S wasn't for listening to, so much as it was for being a familiar background noise.

Neuro Tribes reports on what some top writers listen to as they work. The authors are pretty science-heavy but their music is remarkably varied.  Via Boingboing.
----
TED now has a playlist for creativity.  I don't see Ken Robinson on the list, so perhaps it is new stuff.  I have some new material to watch now.
------

Rappers in an fMRI:


No matter what they were rapping about, their brains "activated differently during the improvised flow versus the memorized lyrics," says Stephanie Pappas at LiveScience. When subjects were freestyling, the medial prefrontal cortex — an area associated with organizing and integrating information — showed an increase an activity. Meanwhile the dorsolateral region, which helps with "self-control, self-monitoring, and self-censoring," showed a decrease in activity, adds Pappas. (This area became more active when the rappers were reciting memorized lyrics.)

Elsewhere in the article, the brain is described as "turning off it's own censors".  This is a valuable reminder that one needs to spew ideas and smooth them out later.

PZ Myers thinks the science of the fMRI work on rappers is trivial.

You know, there’s nothing really wrong with this work: it’s not bad science. It’s just pointless science. It’s settled that we have this technology that can monitor variation in blood flow in the functioning human brain, and that’s nice, but what are people going to do with it? So far, it seems to be simply crudely phenomenological, with investigators stuffing people’s heads in cylinders and asking them to do X, Y, and Z, while we all coo over the pretty colors the computer paints on the screen.
The results of this study, for instance, are completely unsurprising…and they also don’t tell me what should be done next, other than bringing in artists in other genres and seeing what their brains do. Which wouldn’t tell me anything other than more correlations between brain blotches and behavior. I’m not seeing any new questions arising from this work, which to me is the real hallmark of interesting science.


He's probably right, but I see the takeaway a little differently.  I often need the same fact repeated a number of ways before it really sinks in.  I know that one needs to brainstorm and, well, vomit out ideas, and later tidy them up. But I still find myself editing as I write and paralyzing myself when the written work isn't profound or pretty enough.
Posted by Surprises Aplenty at 8:55 AM No comments:

The Oatmeal on making things

Here is one panel from The Oatmeal's latest. 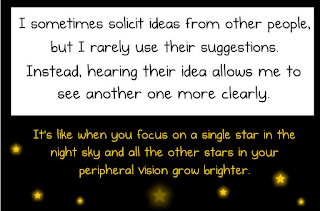 In further panels, someone tells The Oatmeal that they hate hipsters and want a comic on the subject.  He brainstorms ("Hipsters: beards, vintage glasses, mustaches, PBR, skinny jeans"), considers making a comic about beards and eventually makes a story about goats "The hipsters of the Pacific Northwest".

The greater point he works to explain is how his job is wonderful.  He doesn't sugarcoat it though.  His final frames discuss the descent into Hell that all youtube comment threads follow.
Posted by Surprises Aplenty at 6:01 AM No comments:

Productivity... and other links

The writer and unmade beds:


2. An unmade bed has no negative measurable impact in eternity. An unfinished book probably does.3. We will feel much better, and be much less distracted dealing with mundane tasks, important as they may be for the quality of our lives, if our calling is tended to first.

More, and discussion of his points at the link.

Scalzi feels the same way.  When there is work to be done, don't get involved in unnecessary chores. At the link, we can view Scalzi's writing room which is full of chores that will be attended to once the book is done.
---
I'm writing this instead of doing NANOWRIMO- again.  This means I am not the best candidate to dispute the two writers above who are actually writing and getting paid for it.  Still, I would add the caveat that making your bed might be worthwhile once you have achieved some writing goal for the day.  Taking shorts breaks away from the keyboard is probably a good idea.

Also, wear pants.  At The Awl, Alexander Chee has a list of lies writers themselves.  First is "1. Underwear is definitely pants."


..There's no shame in working in your skivvies, though. Victor Hugo used to get undressed and have his valet take his clothes away. Be proud; just know that it's not pants you've got on. Now go back to work.


If you're not writing,but rather solving mechanical problems at work or home, check out these pics from  Dark Roasted Blend. 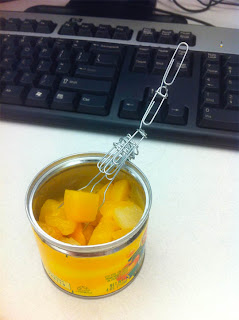 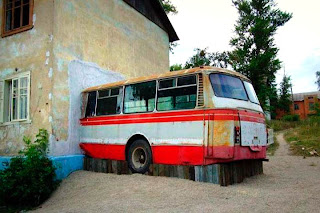 More at the link.
Posted by Surprises Aplenty at 2:00 AM No comments: