A strange deep dive into Fletcher Hanks and more

One thing led to another and I found myself hunting for what I consider Hanks' weirdest image. 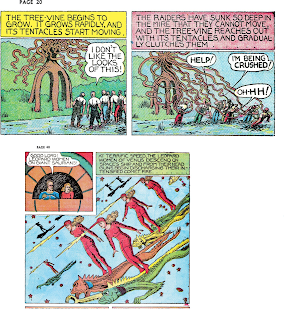 Oh, in finding the one I wanted, the bottom one with Leopard Women on Giant Saurians, I also found the above from another of his comics. That one reminded me a lot of Piers Anthony's Tangle Trees so I had to include it as well.
The Hanks comics came from You Shall Die By Your Own Evil, a biography of Fletcher Hanks. The man turns out to have been a bit of a monster himself. But he sure could imagine stuff!

As I wrote, I found myself looking at a version of a Tangle Tree, so I found this discussion of Beer Barrel trees on Anthony's Xanth. And learned that Xanth looks curiously like Anthony's state of Florida: 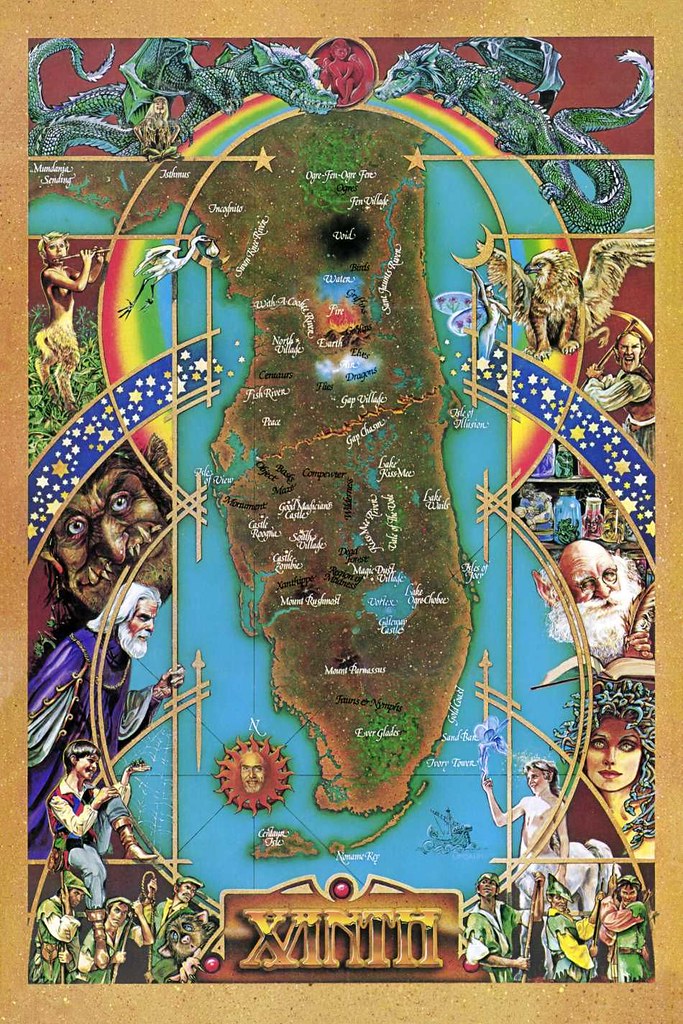 Going down a rabbit hole like this almost feels like I accomplished something today!
Posted by Surprises Aplenty at 9:02 PM No comments:

I have been in a silly mood - probably brought on by concern about my financial situation - and so have made stuff. Don't worry about my finances unless you want to send me some money; I'm okay.

Alright, here goes. I care for a budgie at work. I feed the bird and clean out the cage. I don't believe in fortune telling at all but I still find the idea fun. So I have been asking the bird to make predictions by pooping on labelled pages. 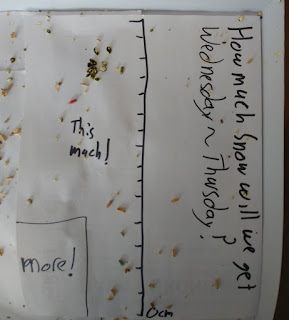 That was a reasonable estimate of how much snow we got. 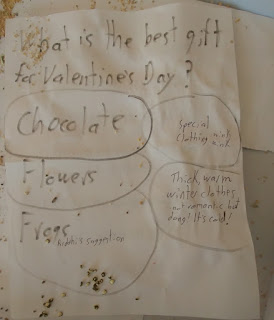 I was making this question and misheard a coworker say she would like 'frogs' for Valentine's Day. She actually would like hugs. Still, it seems the bird agrees with her about frogs. 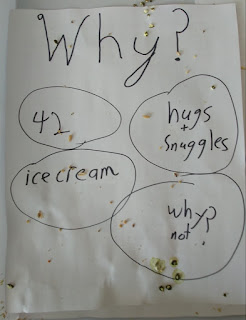 There are several days where I don't have a good question ready so I ask things like this.

I work at a Long Term Care Home and one resident turned 100 years old yesterday. I struggled to make a balloon sign saying "100". If you know it is for a noteworthy birthday, you can tell what it says.  I guess this picture is more of a 'this is the state of SurprisesAplenty's ability rather than creativity' image. 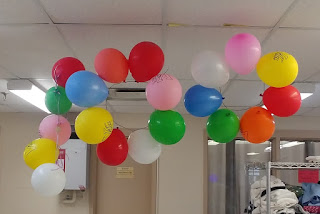 I had just worn a hairnet and was next blowing up balloons for the '100' above. I put the two ideas together and made a watcher who would encourage others to work harder. I then placed half a dozen Postit notes with coworkers' names so that each day another one can be watched. 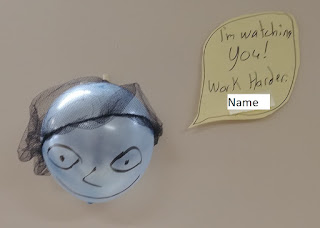 -
On Quora, someone asked a strange question probably about math education. I responded and included a story. Here is the link and here is the story:

Okay, science fiction time.
I gotta say this story got away from me and went places I am embarrassed about. It didn't need to be as smutty but I had a Men's Adventure and tried to repeat for satire purposes a terrible male author writing females. The story didn't need that and I have toned it down a tiny bit.

“You mean,” the sexy but intellectual Betty Jane asked, “that we have discovered an international conspiracy of math teachers who deliberately teach students to buy lottery tickets and play Bingo?” She absentmindedly smoothed her shirt over her breasts and waited for Dr Mansosmart to reply, admiring once again his physique which didn’t fit with his academic fame.

“Yes, BJ,” he replied in his rumbling, deep voice and pointed at the computer screen with his powerful arm and hand, “They have made this tax upon the stupid a dependable way to fund their schools and the sports with which they distract the students and their parents from realizing how stupid lotteries are.”
They heard a noise outside.
“Quickly,” he said, “They are outside the door. I used the laser to weld the door to the frame but it won’t hold them for long!”
“I love you,” said Betty-Jane, wanting him to know before the end.
“Yes, yes,” he replied, “I love BJ, too. I mean, I love you, BJ, too. Don’t panic. There is a duct we can fit through.”
He opened the duct cover and helped her in, admiring her wiggle. Then he closed the cover and stepped away.
The door opened and security entered the room.
“Where is she Doctor,” a guard asked.
“I took care of her,” Mansosmart said. There was a crash as the ventilation duct, obviously made to hold only air, ripped from the ceiling and crashed to the floor, killing the shapely woman inside.
“What’s this on the desk,” asked the second guard. The smiles of Guard One and Mansosmart faded as they saw the phone transmitting their conversation to Bookface, the social media app.
“Damn,” cried Mansosmart, “A hot piece like her would have thousands, even millions of followers. Now they know.” He thought for a moment, then. “You know, if everyone is listening to this, there are probably fewer people at the casino and bingo hall. I bet it is very easy to win right now.”
And as Mansosmart had predicted, the problem took care of itself as greedy, brain damaged listeners killed themselves in car crashes on their way to buy lottery tickets and play Bingo. He would never know however, as the guards, students of that very school, had shot him to speed their own travel to Everyone’s a Winner Bingo Hall.
The end.
…
Or is it?