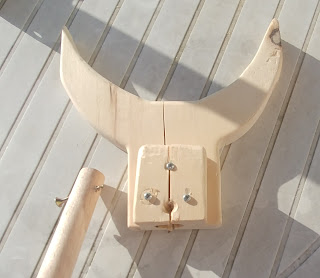 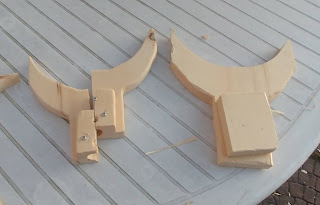 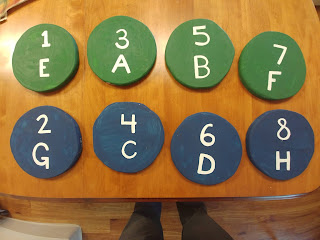 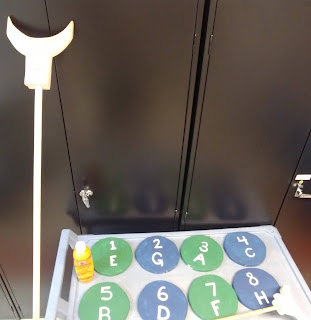 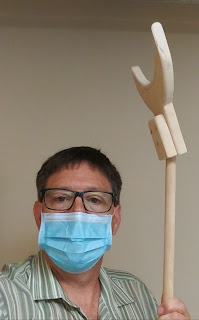 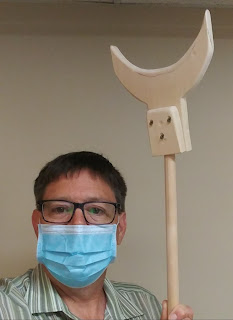 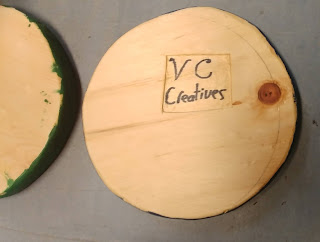 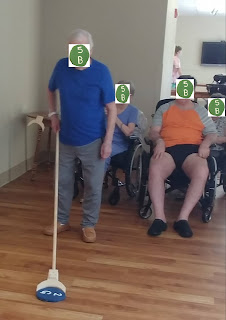 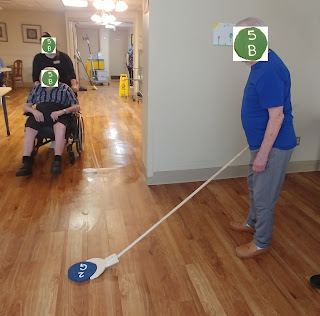 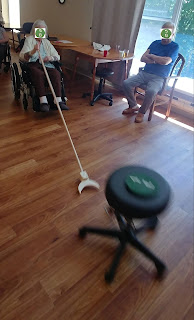 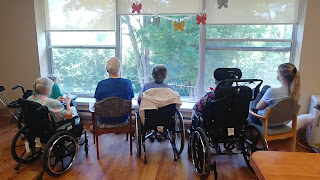 I just wanted to end with a far easier to prep activity than the previous two,
Posted by Surprises Aplenty at 10:00 PM No comments: 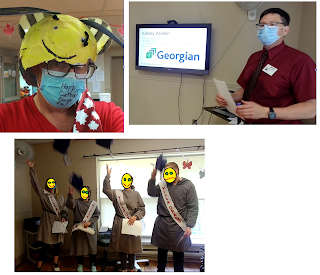 In the weeks leading up to Canada Day, I helped the residents of my Long Term Care Home make papier mache, uh, blobs. Most were just wrapping balloons with the paper soaking in flour water but one had some shape with four legs and a head. One failure here is that the residents often have limited mobility and could not do a lot. Mostly, we chatted while my coworker and I did the work. The residents did more of the painting afterward. The papier mache was touched up and finished by my coworker and I. I gotta say, my coworker did more, and better, painting than I. I got the job done while she got the job done well. Perhaps we complement each other.

I joked that I was going to fill the pinatas with the residents' medications but instead we went with more traditional fillings - sugar free chocolate and candy and hair clips. Okay, hair clips might not be traditional but, especially in this time of CoVID, nobody is coming in to cut the residents' hair and the clips are very useful.

Success and failure: Most of the work was done by staff rather than residents. I don't know if lower tables would help so the residents could be 'over' the activity rather than reaching forward to it.ergonomically, their positions in wheelchairs wasn't ideal. Residents were able to paint solid colours but due to palsy or other issues could not paint details well. We staff did a lot of touch up on the papier mache and then a lot of other work on them. I am still working on crafts that residents do the majority of the work. One success was in breaking them open on Canada Day. We hung two from the ceiling and gave the residents foam paddles. A well aimed blow would tear the pinata open but instead, basically a game of tetherball started with the residents batting the increasingly battered bee back and forth to each other. We will use some of the other papier mache creations and find some version of a tetherball that is heavy enough and also gentle enough when impacts occur.

The second activity in the image above was a 'graduation ceremony' for new hires at the LTC Home that missed their actual ceremonies due to CoVID. One coworker went out of her way to say she was sad that she missed her grad. So, Brian to the rescue!

I learned a few things about the young staff that missed their grads, called a few parents up and arranged a ceremony in the Home. A lot went well and a lot did not and this was a unique event; I do not expect a second chance to get it right. So that was my big problem with it; that I wasn't able to sort out all the issues and problems that could happen, that I didn't work it through in my head, or that I didn't have someone edit my ideas to point out possible problems.

I prepared the robes and everything else in secret, then sent my coworker away on an errand. In the ten minutes she was away, I cleaned out part of the dining room of all the tables and found enough residents awake to fill it up. I also hung grad decorations on the walls and prepared the computer and so on.  For clothing, I secretly changed from shorts and a Hawaiian shirt to good pants, a shirt and tie. Good stuff! First problem; in moving all those tables on the hottest day of the year to that point, I soaked through my shirt, leaving huge dark stains across my stomach and back.

We had mortarboard hats and 'grad' sashes for a previous activity and I got the grads into PPE robes in place of more traditional ones. I played Pomp and Circumstance and lead the graduates into the dining room. The ceremony went fairly well although my voice was far squeakier than I thought - listening to the recording was embarrassing. And I did not explain fully to the residents what was going on. Otherwise, it went very well.
Very well on the third floor, that is! Our LTC Home has two floors of residents and we keep them the floors separate - even staff do not mix much. So once the third floor was done, I raced downstairs to do it again on the second. This was faster, clumsier and all round messier. In my defence, my manager who would have taken some of the tasks, was away unexpectedly.

So I say this was well thought out but not as well executed as I would like and I will not have a chance to repeat it.

The final activity I have been working on that has required creativity is shuffleboard. Not the table top version with small discs you slide across a waxed surface but the larger floor one where you push larger discs with a pole. Below are some of the discs I cut from a 1 X 8 and the launcher that will soon go on the end of a pole. The discs are not done and also not all that round but that gives a few residents a job to do this week. We have two fairly able bodied residents who would otherwise have access to out of doors but because of CoVID are trapped inside. They should be able to use sand paper and smooth out these discs. The cutting and shaping on my end took nearly two hours. This is in part due to not having the best or proper tools for the job. I don't want to give so much free labour to my job but in this case, again because of CoVID, I needed something to do aside from feel lonely. This work helped me and will help residents. Time well spent! 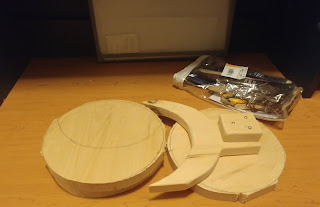 Posted by Surprises Aplenty at 10:24 PM No comments: