I am a fan of Mind Maps and other exercises that claim to improve brain flexibility and intelligence.  I think Mind Mapping has real value, although I have read that Buzan, the promoter of it and other exercises, invents his statistics (Foer discusses it in his book, Moonwalking with Einstein).

I specifically mentioned Buzan so let me state that the results described in Scientific American do not apply specifically to him.

In an article titled "Best Evidence for Brain Training Falls Short", various brain games are shown to improve performance in that game, "But the ability to master a game or ace a psych test often doesn’t translate into better cognition when specific measures of intelligence are assayed later."
The article concludes with:

If you’re doing these tests as part of a personal self-improvement program, maybe consider the piano, Spanish lessons or even Grand Theft Auto 3—The Ultimate Tribute to Liberty. Any of these pose less threat of the monotony that could ultimately undermine the persistence needed for mastery of any new pastime. Seems like a no brainer, in fact.

Next from Sci Am is an article about longevity.  Apparently, people who pursue creative activities live longer.

In other words, creative activities may act as exercises that keep the brain fit. People who exhibit creativity also seem to cope with stress better, finding solutions to stressful situations rather than being overwhelmed by them. And other studies this year have also shown a connection between openness and reduced metabolic risk.


The creative activities do not need to be exhausting or lead to professional-level performance; they do need to be engaging and interesting to the individual.

A commenters asks how to be creative and the author offers some tips.  The tips are very concrete and reasonable and end with the slightly more abstract:

Whatever you go with, the most important first step is to shun criticism, especially from your inner critic. Just turn it off -- stuff it in a box. It's never satisfied and can kill motivation and inspiration, so don't subject your efforts to its withering gaze, and harsh judgment. Learn to ignore it until you feel close to ready to give it the competition of an outsider's judgment.

Posted by Surprises Aplenty at 7:42 PM No comments:

I set some writing goals recently and didn't type a word for days after that.  Its hard for me to find things worth saying.  So, here are things other people are saying:

“Individuals high in creativity maintain the integrity of their neural networks even into old age,” Turiano says—a notion supported by a January study from Yale University that correlated openness with the robustness of study subjects' white matter, which supports connections between neurons in different parts of the brain.


One can debate the list but Gardner’s foremost conclusion is uncontroversial: creative breakthroughs in any domain require strenuous work and a willingness to challenge the establishment.


The psychology of creativity–both empirical research and popular literature for the lay audience–misses this. It reduces creativity to warm showers and blue rooms, forgetting that the life of the eminent creator is not soothing; it is a struggle–a grossly uneven wrestling match with the muses.


Terrify your audience for better rapport.

Emmanuel Kant spoke often about the sublime, and specifically how art becomes more sublime when beauty mixes with terror. Now research provides some support for this philosophical viewpoint.


Posted by Surprises Aplenty at 3:55 AM No comments: 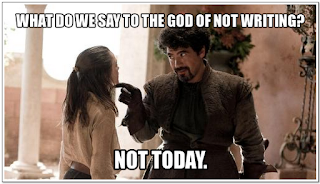 This image motivated me to get writing yesterday and time will tell if something this trivial will have some endurance.   Found at Memecrunch.

McSweeny has some advice on writing.

LEARN FROM THE MASTERS


Posted by Surprises Aplenty at 8:41 AM No comments: