TWIC: the elephant in the room,

Drawing an elephant without ever having seen one. Image is shrunk slightly. To see more fantastical images, follow the link. 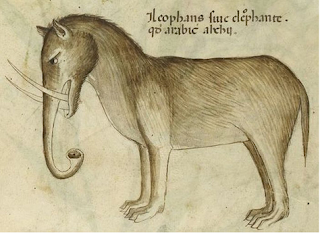 Posted by Surprises Aplenty at 8:43 AM No comments:

Humble bundle has a bundle of books on Game Design, ranging from board games to video games to actual game theory (which I don't think is explicitly about games).
---
Pusan Nation University has a science fiction writing contest.


The First Kim Jin Jae SF Award Competition, sponsored by DRB Holding Co., Ltd., will be held at Pusan National University Library. It is SCIENCE FICTION (SF) competition, which is divided into three categories:
Anyone who is interested in Science Fiction can participate in the competition. The two round system will be used to choose 6 project works in total, 3 projects by teenagers and 3 by adults. The total prize money is 5.3 million won:
*Knowledge of Korean language is necessary.
Who can participate: Anyone who is interested in Science Fiction | Individually or in groups of 3 | Elementary School students, Grade 4 ~ High School students and University students under 27.
Application period: August 1 (Wed) ~ October 1 (Mon)
Application method: Please visit the official website http://kjjsfaward.pusan.ac.kr

---
There are currently 29 answers to What has stopped you from writing your book on Quora.

Posted by Surprises Aplenty at 8:41 PM No comments: