My wife is not Canadian and in her country did not much celebrate Christmas. She is all for getting our son gifts of entertainment and educational and clothing types but doesn't want gifts herself. I do. And I didn't want to have zero gifts for her under the tree.

One thing I knew she would like is a gift I made. She and I have made things for each other in the past with hers being the more beautiful. She no longer makes Hanji boxes or lights but the ones she did make were remarkable. I apparently don't have photos of them quickly available. Here is a Google Search for Hanji papercraft.

Anyway, I made a walking stick for her. It started as a one foot long dowel and I carved a little, added a rope with a cool knot, measured to her size and then added a copper ferrule to keep the bottom from splitting. Click on any image to embiggen them. 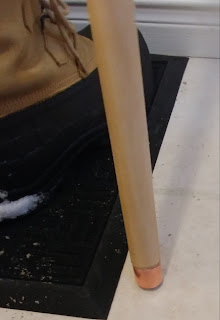 I think I found the idea of using a bit of copper piping for the ferrule on a scouting website. I am sorry that I cannot find it now to offer a link. 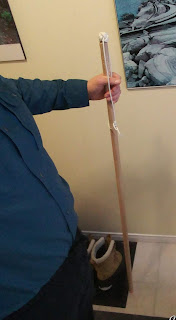 It is a little short for me but the hand grip is quite long so I could use it or my wife could descend a steep slope and still use it when it is planted below her feet.

The staff has a long hand grip area, a Korean flag and a rope affixed with a monkey fist knot. I carved the staff down quite a bit, leaving a knob to put the monkey fist around.

I will soon make a similar walking stick for my son, probably with a half-Korean, half-Canadian flag and whatever other personalizations he wants. Then one for me. Then I will, using the expertise acquired by making three sticks, make a better one for my wife.

Posted by Surprises Aplenty at 11:06 AM No comments:

The admission or goal came out as we studied some interesting driving near our home in Penetanguishene. I suppose there is a metaphor or parable about taking a different path I could offer here but it seems to obvious and less fitting than it appears. 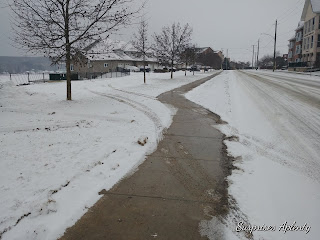 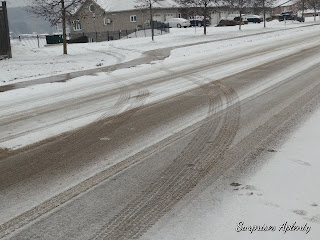 On with my story. Searching for an ironic euphemism, I called the driving 'interesting' while I was wondering it 'impaired' or 'stupid' were better. I took some pictures and my wife told me I always took pictures of interesting things.

At this point I told her I wanted to publish a book next year. She was appropriately appreciative and admiring.

Then I tried to explain my train of thought. In the writing I had done already, I wrote most slowly, most painfully, the parts of getting from A to B. But when writing the interesting parts, my fingers flew over the keyboard and I think I even made fewer mistakes even while writing faster. So I needed to find and make more interesting parts of my currently unfinished stories so I could write them faster.

Oh, she was and is still supportive. I realize the previous two paragraphs sound like the setup for a joke. "She was admiring, I explained myself, now she is divorcing". No, I just wanted to write about writing interesting stuff. And describe my excitement for next year.

Alright, exciting stuff. Last year, I read one and a half books of Butcher's Furies of Calderon series. Everything in this story is exciting. The action jumps from scene to scene without let up. So much stuff happens. And I didn't exactly become bored by the action but did want more detailed world building laid out in a more relaxed manner so I could admire it rather than grasp at hints in the furious action. I liked it but couldn't finish - I felt too tired by it.  I do want to return to it as it had a lot of what I like in my fiction. Maybe I just need to rest up before diving in.

In 2018 and also maybe in 2017, I started to read City Stained Red by Sam Sykes. The story is different in feel than Butcher's but shares the same reckless, headlong action. I thought I liked such things. I definitely admire Sykes' ability to smoothly insert back story into the action.  There were no flashbacks or "as you remember, ...." which are too obviously meant for the reader to catch up with. Instead, with believable banter and dialog, the back story is fit into the action. Again, I do admire this and Sykes' book is probably the best book I couldn't finish. Much better than many books I could and did finish.

I don't know. Those two books - or a series and a book - were somehow 'too' interesting for me. How can I describe the story I want to write: Interesting and exciting but also with 'educational' parts? Parts where I show off my world building? I guess I want something like Niven's Ringworld where the location itself is a character. Or Hillerman's police procedurals set in Navajo territories where again the landscape and culture figure so strongly in the stories.

Posted by Surprises Aplenty at 10:45 AM No comments:

So comes the time when many of us establish goals for the year ahead, and my only advice there is to make sure it's a goal you control, and not one you don't. F'rex, with writers: "Finish this book" is a goal whose result you control, while "sell XYZ copies" you damn sure don't.
— Chuck Wendig (@ChuckWendig) December 28, 2018

Exchanging sex for money can do all of this https://t.co/9bydSQTiSR
— Heather, HBIC (@seraphicpetal) December 27, 2018

Posted by Surprises Aplenty at 10:03 AM No comments:

Posted by Surprises Aplenty at 5:26 PM No comments: