The benefits of Direct to Kindle publishing.

The post offers plenty of details, including some formatting issues.  It reminds me of an ebook I recently read that included the word 'chapter' somewhere in the text.  The sentence ended abruptly and the next page began with 'CHAPTER' in all-caps on it's own line, with the remainder of the sentence below.
Posted by Surprises Aplenty at 7:14 PM No comments:

Nick Cave is not in a creativity competition.

Fifteen years ago, Nick Cave won MTV's best male artist award but declined to accept it.  His letter includes sincere thanks and some mystical discussion of his muse.


I HAVE ALWAYS BEEN OF THE OPINION THAT MY MUSIC IS UNIQUE AND INDIVIDUAL AND EXISTS BEYOND THE REALMS INHABITED BY THOSE WHO WOULD REDUCE THINGS TO MERE MEASURING. I AM IN COMPETITION WITH NO-ONE.

Nick Cave Online via Kottke.
Posted by Surprises Aplenty at 1:50 AM No comments:

Moorcock on how to write

I read a lot of Michael Moorcock in my teens.  Many of his books had similar plots, but he explained as a quirk of his hero's place in every frame of his multiverse.  I don't know if I would enjoy those books now but that is true of a lot of what I read as a teen.  And, I might: I've had a craving lately for pulp.

I didn't notice how formulaic his novels were at the time, but I did notice the wild imagery and ideas.  Elric and others lived in worlds far more brightly hued than our own.

At Wetasphalt, via Boingboing, comes "How to write a book in three days" - lessons from Moorcock.

In 1992, [Moorcock] published a collection of interviews conducted by Colin Greenwood called Michael Moorcock: Death is No Obstacle, in which he discusses his writing method. In the first chapter, "Six Days to Save the World", he says those early novels were written in about "three to ten days" each, and outlines exactly how one accomplishes such fast writing.

This is not the best way to write every novel, or even most novels. Moorcock used it specifically to write sword-and-sorcery action-adventure, but I think it could be applied more-or-less to any kind of potboiler. ...

So all of the quotes below are from just the first chapter of the book. I cannot recommend enough for fiction writers to hunt themselves down a copy (it's sadly out of print) and studying it, especially if you want to understand the purpose of form and structure in fiction. If you want to think of this post as a naked advertisement for this brilliant book, I'm okay with that.

To be clear: This is not my advice. This is Michael Moorcock's advice. I have never written a book in three days. I am planning on making the attempt, however, on the weekend of September 18th, which is Jewish New Years (Rosh Hashanah), and the next time in my calendar when I'll have three days straight with nothing else to do.


---
The post also links to a wikipedia article about the Doc Savage series, also very 'pulpy'.  There, I found this asserted quote:  [For Dent] the Doc Savage series was simply a job, a way to earn a living by "churning out reams and reams of sellable crap", never dreaming how his series would catch on.

How to make comics!

You're welcome!
A flowchart of how James Turner makes comics: 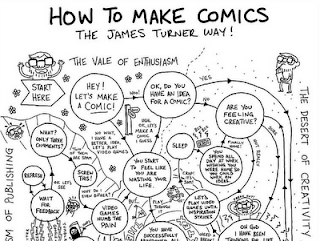 Follow the link to see the rest.
Posted by Surprises Aplenty at 11:42 AM No comments: