Bah! I am certain I have better photos of this cocoon but this is the best ten minutes of searching my files offers! 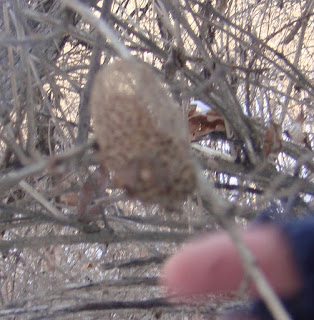 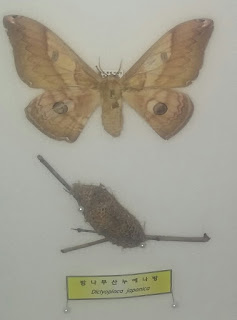 Posted by Surprises Aplenty at 5:39 AM No comments:

CBC offers daily short inspirational messages to help you write. This one also had a link to their creative non-fiction contest with entries due February 28

---
AIs must learn the rules before they can break them in creative ways.


Still, getting machines to accurately mimic human style—whether Rembrandt’s or J. K. Rowling’s—is perhaps a good place to start when developing creative AI, Riedl says. After all, human creators often start off imitating the skills and processes of accomplished artists. The next step, for both people and machines, is to use those skills as part of a strategy to create something original.

A lot of how the artificial intelligences learn seems similar to how we learn. First ingest a great deal of sample material to absorb the rules, then break those rules in specific ways.
---
Writing is messy


Writing is messy. In fact, “messy” doesn’t really cover it. Writing is messy, bloody, outrageous, impossible to predict, crazy-making, and soul-sucking. It’s also deeply fulfilling, joyful, sexy, exciting, and soul-nourishing. It is all of these things and nothing that can be contained on a schedule or within an outline.
When I first started out as a writer, I assumed that good writers were the master and writing itself was the servant. Now, after ten years of hard experience, I know that it’s the other way around.
So, if you’re working with a manuscript and you’re confused, frustrated, or in despair about it, know that you’re on the right track.

---
Advice for explaining science from Sci Am. An excerpt:


The first step is to connect the research you are doing or pursuing to a bigger theme. Is it the environment? Climate change? Public health? As an example, my research on beneficial soil microbes ties into several major themes including climate change, food security and soil health.
Secondly, it is important to find the story and storyline in your research. How do the results of your research creatively link and connect to the global challenges facing humanity? Once you have this lined up, it is time to write the piece.
Op-eds are centered around an argument: essentially you are arguing for or against something. So, you must decide on this before you can write the rest of your piece. The core argument should only be a sentence long and stated in a way that is convincing to your readers.

---
Some research exists to connect creativity to unethical action. One hypothesis explaining it is that creative people can more easily rationalize or explain away their bad actions.
As an example of this, some professors in Korea deliberately add the names of their children as authors on their research to give them a boost in recognition.

I learned of this on a Facebook group and only thought to add it to this week's roundup because of this comment (name redacted):


XXXNAMEXX Every time I thought "well, that's it, can't possibly get any more creative" ... Indeed most creative country in the world!!

---
I have just learned of The Eye of Argon, a much derided fantasy story that is so bad it is good and also so bad it wonderfully displays what errors to avoid. Wikipedia. Discussion.  Full text.  The original paper scanned with its illustrations and more. And a man successfully reading the first chapter. I hope I am never kicked between the testicles. That sounds...unsettling.
Posted by Surprises Aplenty at 6:22 PM No comments:

Monica Heilman offers some productivity hacks at her blog. One is about lists and actually following them. I should read it some time.
---
Jaipur has a literary festival coming soon. A wonderful city and I would love to go.
Posted by Surprises Aplenty at 5:30 AM No comments:

I had seen this cocoon* a few times in Gangwon province. It appears that the caterpillar tricks the tree into keeping the leaf alive through the winter and so giving the caterpillar a protected, somewhat warmer, place to live.

I wondered what caterpillar, or other form of larva was inside. On January 15, my group of nature teachers visited an insect museum for a tour and I learned the answer. 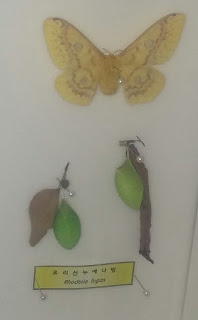 If anyone is interested I am on the right. 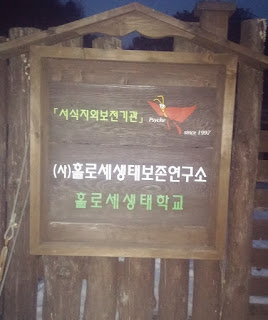 Holoce Insect School is not a place for insects to study but for researchers to study insects. It is remote and challenging to visit but if you are a Kipling-esce bug hunter it is worth a visit.

Posted by Surprises Aplenty at 9:01 PM No comments:

An infographic from Weiland on plot and story arcs. Actually a series of them. Here is one, uncropped but shrank somewhat. To see it full size, and many others, follow the link: 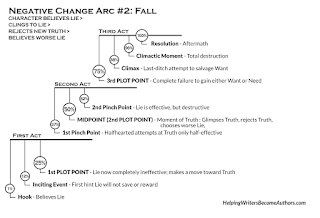