I'm at an ESL camp and using some down time to finish some carving that I had started and left for too long. 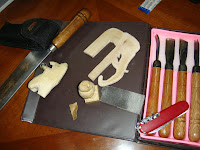 In the picture you can see some the nearly-done carvings, chisels, a small saw and Swiss Army knife... and a bandaid.  The bandaid is every bit as important as the others!  I nicked my finger finishing the wardrobe-elephant.

Below is the wardrobe elephant as it is meant to be used. 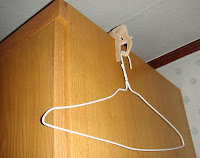 I don't know if I will ever finish the triceratops head, but the owl is about ready for sanding.

There is a lot of sawn-down trees.  Perhaps it is time I tried carving in the round.
Posted by Surprises Aplenty at 4:51 AM No comments:

From Marginal Revolution, comes a retelling of a problem I reviewed last year: "Teachers don't like creative students". I'm quoting from Alex Tabarrok, who is quoting from someone else and Blogger won't nest quotes inside other quotes, so let me quote in blue:


My experience as a parent is consistent with the idea that teachers don’t like creative students but I try not to blame the teachers too much. Creative people, for better and worse, ignore social conventions. Thus, it can be hard for teachers to deal with creative students in a classroom setting where they must guide 20-30 students en masse. As Jonah Lehrer puts it:

Would you really want a little Picasso in your class? How about a baby Gertrude Stein? Or a teenage Eminem? The point is that the classroom isn’t designed for impulsive expression – that’s called talking out of turn. Instead, it’s all about obeying group dynamics and exerting focused attention. Those are important life skills, of course, but decades of psychological research suggest that such skills have little to do with creativity.

The article offers a link to a "good review paper" on the subject.  Creativity: asset or burden in the classroom.

Freakonomics offered a quote with this comment: Creative types are more likely to cheat.  The link goes to Time Healthland:


Creative people think “outside the box,” a gift of psychological flexibility that, it turns out, may also apply to their ethics, according to the latest research from the American Psychological Association. Creative types, in other words, may be more likely to cheat.

The article quotes Dan Ariely, who is well worth reading on a variety of subjects.  I tend to trust what he has to say, but I wonder.


“Dishonesty and innovation are two of the topics most widely written about in the popular press,” wrote the authors. “Yet, to date, the relationship between creativity and dishonest behavior has not been studied empirically. … The results from the current article indicate that, in fact, people who are creative or work in environments that promote creative thinking may be the most at risk when they face ethical dilemmas.”


Perhaps I am using my creativity to rationalize unethical behavior, but I wonder if we are seeing a rebellion against artificial deadlines and rules that are arbitrary and not-so-meaningful outside of school. If an explanation for the rules that the student felt made sense were offered, perhaps they would be less likely to cheat.

I must admit that in reading my paragraph above I see that I am confusing creativity with intelligence. I would like the two to be related but can't say for sure that they are.
--------* Merry Christmas, everyone!
Posted by Surprises Aplenty at 6:37 PM No comments:

Two images involving my son today.  First is a wall mural we are working on together. 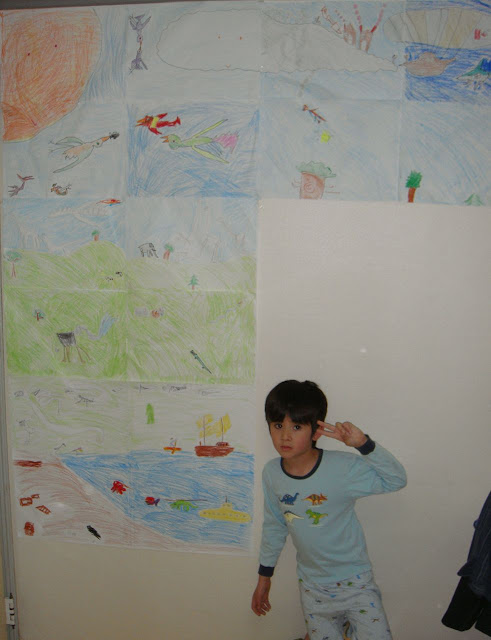 This mural will eventually reach across to the right about four more B5 pages worth.  Click to enlarge, if you wish.  You will find a variety of animals and objects and some are obviously poorly-drawn by me and others may be well-depicted elements from my son's imagination.  The whole mural is a fun project but also a contest of wills for whose creative vision will predominate.

Next, my son drew a picture of the living room in our apartment: 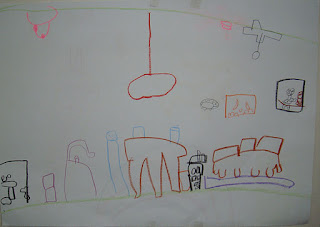 The thing is, this picture is a 270 degree view.  Leftmost, is the entrance to the bathroom and moving right: our fridge, sink, rice cooker, kitchen table, bookshelf and sofa.  If you can see into the bathroom, the kitchen table would be directly behind you and the sofa behind and to your left.  I don't know what this means in my son's artistic or cognitive growth, but it is interesting enough that I want to keep a record of it here.
Posted by Surprises Aplenty at 4:38 PM No comments:

Being a writer in Korea

IfIhadaminutetospare has written a series of articles on being and becoming a writer in Korea.

From the first article (On Becoming a Writer in Korea):


This week, I started a distance learning journalism course with the London School of Journalism. I suppose it’s a way looking in the right direction for becoming a real writer, as opposed to an unreal writer. It was something I’ve wanted to do for a long time, as journalism is probably the most realistic and recognisable way of making a living out of writing, which is actually a, ahem, dream of mine....Don’t ask me where writing came from. Maybe it was from one of those awful aptitude tests they force on you where you find out that you are actually incapable of being good at maths so why bother trying? In fact, I know I was good at spatial relations, but that’s nothing to do with writing (although I do like my page to look neat and organised…)...So anyway, one day I decided I’d give it a shot. I bought a pen and a notebook and decided to scribble down a few things I saw, and I even attempted a poem. I got a lot of satisfaction from this and basically continued on with it.
One drunken night, I spoke with my friend Keith and showed him my notebook. Keith, a bit of poet himself, was more than impressed and encouraged me to keep writing and to keep trying. Then word got around to another friend of mine, Jeremy,  who was even more of a poet, and next thing I knew I believe I was being taken under their wings and essentially became some form of an apprentice.

Posted by Surprises Aplenty at 4:39 PM No comments:

I did enjoy the process and do plan to keep writing the story I started.

In many respects, I approve of the idea.  The core concept is to pour out as many words as  you can without slowing to edit yourself.  Editing is important, but brainstorming comes first.  Churn out ideas, then throw out the bad ones.

On the other hand, my unfiltered ideas were clearly crap.  If I had reached 50,000 words, I would have needed to use them as notes and write an entirely new 50,000 good words to make a quality story.

Years ago, I read a description of what a plot needs by James Blish.  As I recall, the problems had to be solved directly and specifically through the action of the protagonist.  He said something like, "A lightning bolt cannot kill the villain in the last act, saving the day."  In my story, there were a few scenes where violence occurred and in one of them, a villain was unlucky enough to be struck by lightning.  It made a little sense in the context, but still was not thrilling.

I liked the location I placed the fight in but will need to tear out all the action and replace it.

Nanowrimo became for me, a sort of wasteful and high intensity first draft of -not the story- but the plot.  I understand the need for multiple drafts but feel horrified that if I finished my Nanowrimo story, it would be draft 0.5.
--------
I wrote much of my story using Ommwriter on my iMac and found that to be everything it claimed.  Ommwriter is a word processor that has few settings - it is only available as full-screen - and is intended to reduce distractions.  I like it.  Still, I also wrote away from the apartment and so used Google Docs often.  I know the goal is unrestricted production, but I found accessing Google Maps and occasional searches helped me produce.

Also fun to type in is Written?  Kitten!  For every one hundred words (you can adjust this number) you type, a new photo of a cute kitten is shown.
-----
I have started following John T. Spencer's blogs and books.  I really enjoyed Pencil Me In.
He also started nanowrimo - and is probably finished now.  This is what he had to say early in the month:


I am starting the process of writing a novel in a month.  It's part of the National Novel Writing Month.  You can check out the description here. I plan to edit it throughout December and release it sometime around the first of the year. I'll be posting the chapters to this blog and to a Google Doc.  It's the first time I've ever been so open with the writing process.

Posted by Surprises Aplenty at 6:16 AM No comments: