The shape of stories. 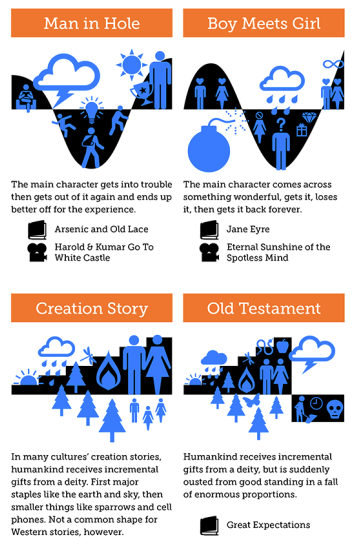 ---
Get the content right first, then work on the design. - Placeholder text that made it into the final edition.  At the end of the humorous images is a link to Content-first design principles.
I am considering writing a book about the poor arguments Creationists use, but write it for Creationists.  My hope is to improve creationist claims by getting rid of the weakest ten or twenty.  The key will be to get the tone right and that is a sort of a Design-first argument.
---
An author from my hometown has penned her second book.  She got her start in the Muskoka Novel Marathon which I've mentioned here in the past.
Posted by Surprises Aplenty at 8:00 PM No comments:

Writers on a Train

My grandfather was a conductor and I've often wanted to be excited by train travel.  The closest I came was in India where I had great trips - the rail pass with its entry into the air conditioned cars was wonderful.

Otherwise, it is a utilitarian form of transport that is nowadays squeezing as much profit from comfort as  the infamous Ryan Air.  Well, I have only travelled by train recently in South Korea where no trip is long enough to require much in the way of amenities.

These writers had a better experience and one I now want to try (here and here). From the former link:


In a 2009 piece for The Millions, Emily St. John Mandel describes working on a novel during her morning commute on the New York City subway. “It felt like extra time,” she writes. “I began scrawling fragments of the third novel on folded-up wads of scrap paper, using a book as my desk.” Mandel polled around and found other writers used the subway as a workspace, too. Julie Klam: “Part of the reason I like it is because it has a very distinct end. It’s not like having six hours at home. I tend to have great bursts of inspiration that last about six stops.” Mark Snyder: “I think the act of working, surrounded by other people living their lives, can be quite a compelling act for yourself. It makes me feel less alone.”


... People need to be reminded so that they can take care themselves. Unless you are aware of how prevalent crap contracts are in the industry, you wouldn’t understand the importance of following the advice implicit in Don’s tweet (don’t sign a bad publishing contract). Every time an author gripes online about a contract another author is reminded to always go over their contracts with a ruler and an anal attitude.
If we ask them all to shut up because we perceive their complaints to be attacks on traditional publishing then we are only making the situation worse for everybody.
And I mean everybody. Every time a publisher screws another author they are doing their industry a disservice.
The single biggest step publishers could take towards taking the wind out of self-publishing’s sail would be to standardise, publicly, on fairer contracts.

So you probably should self-publish.


Hugh Howey, author of the bestselling, indie-original science fiction series Wool, has published an eye-popping, and important data-rich report on independent author earnings from ebooks sold on Amazon. Howey makes a good case that the "average" author earns more from a self published book than she would through one of the Big Five publishers, and, what's more, that this holds true for all sorts of outliers (the richest indie authors outperform the richest Big Five authors; less-prolific indies do better than less-prolific traditionals, etc).

Read more at the above link to hear Doctorow's thoughts on amazon's monopoly on self-publishing and how that may come to bite us all on the ass.


Wil Wheaton talks about jogging to, uh, jog his creativity and also about Doctorow.  His post is too short for me to excerpt enough to entice you to see the whole thing, so you have to go there to see anything!
asdf
Posted by Surprises Aplenty at 8:02 AM No comments:

I follow Maggie Koerth-Baker's writing at Boingboing and she was recently interviewed at the Open Notebook.  She goes into detail about many aspects of her creative life, but , being a Boingboing writer, there is a strong focus on gear and software.  If you want all the details, and you should, follow the link, but here is a heavily elided excerpt:

Essential software/apps/productivity tools:For phone interviews: Skype, Call Recorder, and Stickies.... As I finish stories, the contents of the Stickies are transferred to archived Word docs and/or Evernote.
For in-person interviews: I swear by the Livescribe pen. The Livescribe allows me to record audio and take notes, with the audio linked up to the notes, so that later I can find exactly the audio quotes and information I want quickly, just by tapping on the note that corresponds to what I’m looking for. It’s great. Plus my pen and recorder are one object, which means less stuff to juggle around. It’s also a great ice-breaker with sources. Everybody wants to poke at it for a couple of minutes. Then they seem to forget it’s even there.
Google Calendar keeps my life in order...
I’m experimenting with a new organizational system that I’m calling Just Put Everything in Evernote....
I increasingly do my writing in Google Docs. Or Drive, ...
When I was working on my book, I used DEVONthink to organize and store papers, interview transcripts, etc..... I did that monthly and saved it to Dropbox, so that, if something happened to the computer, it wouldn’t take my whole book with it.
I love EasyCrop for quickly adjusting images for use on my BoingBoing posts. It just makes life easier.
I bought a scanner a couple of years ago, and it’s been damn near life changing....
Unless absolutely forbidden to use it, I do all my presentations in Prezi.

---
One thing that The Road brought home to me was the reality that science fiction apocalyptic scenarios don't need to be fast and realistic ones probably won't be.  The remarkably competent father in the story could use most resources fully but he, and the rest of the world, were running out and nothing new was being made.  There was no way to really 'prep' in that world.  In fact, the father and son find and stay at an emergency shelter for a few days but have to leave it and at its best, it would have helped them for a week or so.  So, prepping might help but only for the first burst of confusion after a disaster.  That might be enough or it might not.  I still like reading that kind of story and this resource might help.  A company named Wolfram offers an emergency cabinet ($14,000) and locker ($5,500) which look like they are for more standard emergencies - being snowed in or the like (there's no Anti-Zombie ax or any obvious weapon).  What do you get?
From "Food, water and water equipment" in the Cabinet:

Not being addicted to coffee, I wonder what the coffee filters are for.  Perhaps they work with the purification tablets - filter out large impurities, then chlorinate the small.
Via Boingboing.
---
Ira Glass on the problem of beginners having good taste and recognizing that their early work will not be very good.  I thought that I had written about this earlier but didn't see it in the past few posts, so here it is (again).
---
Getting sequels out faster.  I know that GRRM is not my bitch, but I also understand that many readers get angry with waiting. I have only read Vandermeer's book on science fiction and fantasy writing, not the actual science fiction or fantasy he has written, but I love it.  He is now in the process of getting a trilogy printed so that all three books come out in one year.  Just as my son and I have been watching nearly every single episode of Corner Gas (A Canadian sit-com set in Saskatchewan), people nowadays have gotten used to binge-reading or binge-watching and not waiting for years for the next book.

I think this is fine for established authors but is a new, huge challenge for beginning writers.  Don't merely write a novel, write three!
---
I was going to write "Mathies...", but this is a contest for anyone with interest in science fiction and math.  What if the normal curve had not been discovered? Via Boingboing which describes the contest as imagining a world without a normal curve, which is different from the curve, and all statistics, being discovered or not.  The prizes are described as "[season] youth prize" and the first is the "Winter youth prize" - deadline March 1.  The last is the Grand Prize (December 15) and it is the only one that doesn't specify an age group.
Posted by Surprises Aplenty at 3:11 AM No comments: