TWIC: even quicker links than usual

I am preparing for Nanowrimo and am an ML (Municipal Liaison) this year.  It is taking a lot of my time.  My posts have usually been of the overview sort rather than in depth analysis.  Expect me to hew even closer to the norm for the next month.

Here are the links that I hope help you make it through the month of light blogging.

The essence of Miyazaki.
---

Christine Frazier at the Better Novel Project works to understand novels at the numbers or statistics level.  She fills index cards with quantifiable details.  Recently, she noted that many top rated YA novels have 20 characters introduced in the first chapter.  Her work reminds me of  Jessica Hagy's work with numbers and details on index cards.
---
Stephen King has ten tips for writing.
---
There are two articles up about young people being involved in Nanowrimo.  Both are audio that I haven't yet listened to.  Sadie Nastor is nine. The others are eleven.
Posted by Surprises Aplenty at 9:15 AM No comments:

Stories with my son

Two nights ago, we slept at the in-laws after a wedding.  My son asked for some stories to help him sleep.
For the first story, I asked for a country, an animal and a fruit. My son offered: Canada, squid and pineapple.  I used a Korean pun to suggest that this squid - I think nameless in the story - was a 'San' ojingeo.  "San" probably means fresh or alive in this context but normally means 'mountain' (ah, 'ojingeo' means squid.)  So this squid was swinging from the trees on its tentacles in the mountains of BC.  It would drop on squirrels and eat them.  My son was horrified about this so the squid started trying fruit and broke into a greenhouse to eat pineapples.
Not a great story, but it had its fun moments.
For the second story, I asked for an insect, a school supply and a farm tool.    The story revolved around Jimmie Mosquito and his farming hoe and an eraser.
The final story was about a computer, the game Minecraft and an apple.

Again, none of the stories stand out as thrilling or had twist endings but my son was entertained and the stories held some surprises.  Good stuff.
Posted by Surprises Aplenty at 5:57 PM No comments:

What I learned when I diversified my reading.

How to stay creative while working fulltime.

"I take it easy and only publish a book every two months or so.  Not a book or two every month." Iris Johanson in an interview with writer 2.0.  I couldn't quickly find any authors publishing that quickly but one, Craig Osso, manages a book every five weeks - 26 books in thirty months.


POW! Two unrelated ideas, adolescent cruelty and telekinesis, came together, and I had an idea.

Posted by Surprises Aplenty at 8:20 AM No comments:

On the Dadaepo beach of Saha district in Busan, is the Sea Art Exhibit.  It started in Sept and closes this Sunday.  The dog and I had a lot of fun at it in today's beautiful weather.

The exhibits all featured some connection to the ocean, waves and things moving and temporary.

One exhibit was a pair of photos taken in Ontario, Canada.  One was taken in Fairy Lake, Huntsville near my home town and the lake I last did a polar bear swim in.

One artist, Yoko Ono, had a paper wish tree.  My photo: 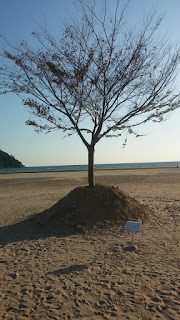 Two more that I liked: 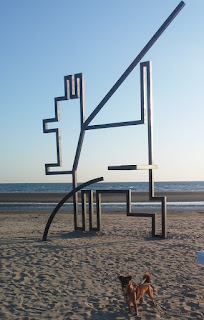 The dog loved running on the open beach. 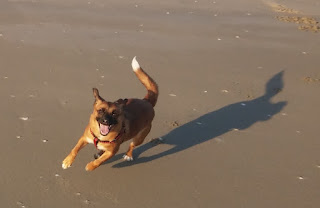 Posted by Surprises Aplenty at 7:32 AM No comments:

I've just finished day one of two of KOTESOL International Conference.  Some presentations were better than others but one, though not the best transfer of information seems the most interesting to build on in the next semester.

An Alternative Reality Game has many of the following elements: fictional narrative, interactive, transmedia (takes place in the real world and online in a variety of media), "This is not a game" mentality (don't break character), puzzles and codes.  The 1997 Michael Douglas movie, The Game, is an example and another one is given below.

Oh, the talk was given by Paul Starr of Seoul National University.  He gave a good talk that explained the basics but I don't think it got into the "Participants will then be asked to design some basic ARG elements for their own learning environments." part described in the conference guide.  To be fair, he had a lot to cover in a short time and I did become interested enough in the idea to want to learn more and that's gotta be an indicator of success.

I think I'm at three now:  On the third hand, he also included a code game on his handout so some of us ignored part of his talk to solve his mini game.

I teach various classes at my university and also run voluntary activities at the "English Cafe".  In the past, we've watched The Simpsons -with questions to be answered for a prize, played board games (again with prizes available) and every semester we have a scavenger hunt.  If I can get this going, next semester we will have an ARG instead of the Scavenger Hunt.

As my very first brainstormed ideas, I envision:

The big thing lacking is a narrative.  As a sci-fi/ fantasy fan, could it be the signals of a future Dongseo student trapped in time by an experiment in the engineering or medical training spaces?  Or is that too cliche?  Whatever, I want to do this.


A concerned group of citizens is investigating a conspiracy hiding facts about the mysterious and controversial past of this masterpiece of brutalist architecture. At the same time a noble, if shadowy, society is working to keep its secrets hidden."
"Led by the University of Toronto libraries, Open Robarts is an alternate reality game celebrating the tensions between open access and the control of information. Designed by local Toronto artist David Oxley and author Mark Foo, Open Robarts explores themes of information and control, and is meant to draw attention to and celebrate open access forGlobal Open Access Week 2015. There are many ways into the game, even for non-locals.

Posted by Surprises Aplenty at 7:02 PM No comments:

TWIC: Fun Palaces are Places for participants, not spectators

Boingboing has an article with a video describing Fun  Palaces, places for people to make their owns ways to be active, learn and create.  As mentioned before on this blog, I am concerned about the future of libraries and the article describes how they are getting involved.

------------------------------
Declining E-book experience.  I am satisfied with my Kindle - even very satisfied as I am the sort who likes to carry much of a library with me and am in a bad location to get paper books.  And yet, even I see that the reading device could be designed better.  I do like the Kindle's focus on one thing - reading.  I can surf the internet if I need to, I mean really need to.  At the same time, I can use a book as a paper weight or (once) as a cutting board.
-------
The Art of Manliness tells us that writing a book is hard to do.  The author of the piece had to write three of them before selling one.  He isn't necessarily advising against it but he is encouraging informed participation.
Posted by Surprises Aplenty at 7:59 AM No comments: