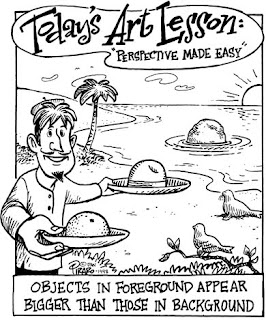 By Dan Piraro, of BizarroBlog.

From Hogarth and found on Wikipedia.

Posted by Surprises Aplenty at 3:00 AM No comments:

How would you improve health in a community?

Scientific American reviews an article in Circulation and one suggestion stood out: improve sidewalks.

A professor in an Urban and Environmental Studies class I took in '87 described how to improve bus ridership.  He did not discuss decreased prices but rather suggested vending machines and attendants; his main point was that the local bus service cost local government ...ah, nine million, I think, while maintaining the major highway was twenty-seven million.  Whatever the numbers, the highway sucked up three times what the bus service did.

I like looking at offbeat solutions like these.  My varsity swim coach described his weight problem and how he solved it.  I think his solution was quitting smoking, because he always smoked at a donut shop and while he was there, he had a sugary coffee and donut.  Cutting smoking took him out of locations of high temptation.

So, how would I improve health in a community?  Here in big-city Busan in South Korea, we live in an apartment and I have a nodding acquaintance with some neighbours but I don't have any friends nearby.  My big complaint here is parking and traffic; encouraging people to use public transit or bikes would be beneficial but not as much as it would be in most of Canada.
...
My big and offbeat suggestion for improved health in the community would be to close hagwons (supplementary cramming schools) earlier in the evening, perhaps by eight pm. Kids might be able to get more sleep and spend more time with their family.

I was going to consider  my parents-in-law's village, where the median age is around sixty and most people work at farms.  There are also many foreigners from third world countries doing DDD work for small factories.  The factories have been popping up as farmers retire and sell their land.

It seems presumptuous for me to suggest their health could be improved.  Both parents-in-law work longer and harder than I do and are in their seventies.  They eat farm-fresh food they have prepared themselves and live near extended family members, while children and grandchildren visit and help out nearly weekly.  Physically, mentally, and socially, these are healthy people.

Hmm, the more I think about this, the best way for Canadians to improve their health would be to adopt a lot of the customs of the Korean elderly (not the frequent spitting, though).  Live near family, exercise in the mountains and keep active.
Posted by Surprises Aplenty at 7:50 AM No comments: