Twine is, well, I'm still figuring it out myself, but it seems to be a way to make interactive fictions and at least text-based games similar to the old choose-your-own-adventure books of my childhood.  It seems pretty cool and I will be playing with it further.  What I've seen is pretty cool.  Twine 2.0 is now in beta, which I think means it is mostly ready to use. More info from the maker. Wikipedia has a stub on the subject.
Ah, Gamespot has more:


It allows you to link passages of text via links, which has led many people to compare games made with Twine to old Choose Your Own Adventure books. But Twine allows you to do things that those books never could. Games can keep track of decisions made and actions taken by players much earlier in the game--what type of weapon they selected, for instance, or whether or not they collected a particular key. With a bit of creativity on the part of the creator, games can have puzzles that players can't quickly "solve" by just trying each of a few options. Games can also include images and videos, and with a bit of extra know-how, you can also employ basic effects, such as flashing text, which can do a good deal to foster a particular mood in your game.

---
The CBC's short story contest, Canada Writes, is running now.  They are accepting stories of between 1200 and 1500 words until November 1.  Entry is limited to Canadians or residents of Canada and there is a $25 fee to enter the contest.  The CBC also has a word cloud of clickable tips for writing.
Posted by Surprises Aplenty at 5:19 AM No comments:

Stephen King on Writing, Sci Am on mental disorders and creativity, and writing a book with evernote

Stephen King recounts being a school teacher.  Jessica Lahey interviewed him on how he taught:

Lahey: You extol the benefits of writing first drafts with the door closed, but students are often so focused on giving teachers what they want and afraid of making mistakes that they become paralyzed. How can teachers encourage kids to close the door and write without fear?
King: In a class situation, this is very, very hard. That fearlessness always comes when a kid is writing for himself, and almost never when doing directed writing for the grade (unless you get one of those rare fearless kids who’s totally confident). The best thing—maybe the only thing—is to tell the student that telling the truth is the most important thing, much more important than the grammar. I would say, “The truth is always eloquent.” To which they would respond, “Mr. King, what does eloquent mean?”
King: A lot of them didn’t care; they were just hacking out assignments. For those that are sensitive and insecure, you have to combine gentleness with firmness. It’s a tightrope, particularly with teenagers. Did I have students actually bust out crying? I did. I’d say, “This is just a step to get you to the next step.”Lahey: Of course, once they have something down on paper, they are going to have to open the door and invite the world to read what they have written. How did you cope with the editing process early in your writing career, and how did you teach your students to handle feedback?
Lahey: You warn writers not to “come lightly to the blank page.” How can teachers encourage kids to come the blank page with both gravity and enthusiasm?
King: It went best for me when I could communicate my own enthusiasm. I can remember teaching Dracula to sophomores and practically screaming, “Look at all the different voices in this book! Stoker’s a ventriloquist! I love that!” I don’t have much use for teachers who “perform,” like they’re onstage, but kids respond to enthusiasm. You can’t command a kid to have fun, but you can make the classroom a place that feels safe, where interesting things happen. I wanted every 50-minute class to feel like half an hour.


There's a lot more that I liked as an English teacher and as a writer.  I think "writing with the door closed" means absent outside concerns, perhaps even walled off from your personal editor.  Approaching a blank page with both serious intent and eagerness is an interesting way to look at it, too.
By the way, I am a teacher who performs like I'm onstage, so perhaps I need to mature up my game.
---
Scientific American on spectrum disorders and creativity:

They found that both real-world creative achievement and creative cognition (as rated by four independent judges) were significantly associated with two personality traits:psychoticism and hypomania. These findings remained even after taking into account prior academic achievement test scores.

Psychoticism is characterized by impulsivity, sensation-seeking, and proneness to psychosis. Many of the items on the psychoticism scale measure oddness of thought and behavior, such as “Other people seem to think my behavior is weird”, “My thoughts are strange and unpredictable”, and “My thoughts often don’t make sense to others.” In a clinical setting, extremely high levels of psychoticism may be cause for a diagnosis of mental illness, but this finding suggests that in the normally varying general population, there is an association between these characteristics and real-world creative achievement.

Creativity was also associated with hypomania, a mood state characterized by high energy levels, rapid mood fluctuations, and racing thoughts. Some items on the hypomania scale include “I am frequently in such high spirits that I can’t concentrate on any one thing for too long”, “I have such a wide range of interests that I often don’t know what to do next”, and “Sometimes ideas and insights come to me so fast that I cannot express them all”. Again, in a clinical setting, extreme levels of this trait may require rehabilitation. But this finding (and the findings of prior studies) suggests that in the general population hypomania is associated with creative achievement.

Neither creative cognition nor creative achievement were associated with depression ...

Interestingly, creative cognition was no longer associated with real-world creative achievement, psychoticism or hypomania when scoring the test using the method recommended in the testing manual.

----
I love Ommwriter, others like Scrivener, but Evernote?  Yes, a man wrote a book using nothing but Evernote.


One reason I used Evernote was because I kept all of my reporting notes and research in Evernote, and I wanted quick access to all that while I was writing.
It felt less clunky switching between screens in the same app than switching between Evernote and a slow-loading memory hog like Microsoft Word or the surprisingly lethargic Google Docs.
Another few reasons:
• Evernote constantly saves what you're working on and backs it up to the cloud.• I have Evernote on my phone and iPad, and it was nice to be able to pull up my draft and review it anytime anywhere.• Evernote note windows are sparse, and I like that for writing.• I've developed a "process" around turning reporting/research into writing in Evernote, and when you're doing work as open-ended as long form writing, it's nice to have some step-by-step tasks to do to ground you.

Posted by Surprises Aplenty at 8:19 AM No comments:

Want to be a writer? Grow a thick skin!

Responding to a lukewarm review: Author Stephan Harper dominates the comments of a review of his book -and not really in a good way. Click to embiggen. 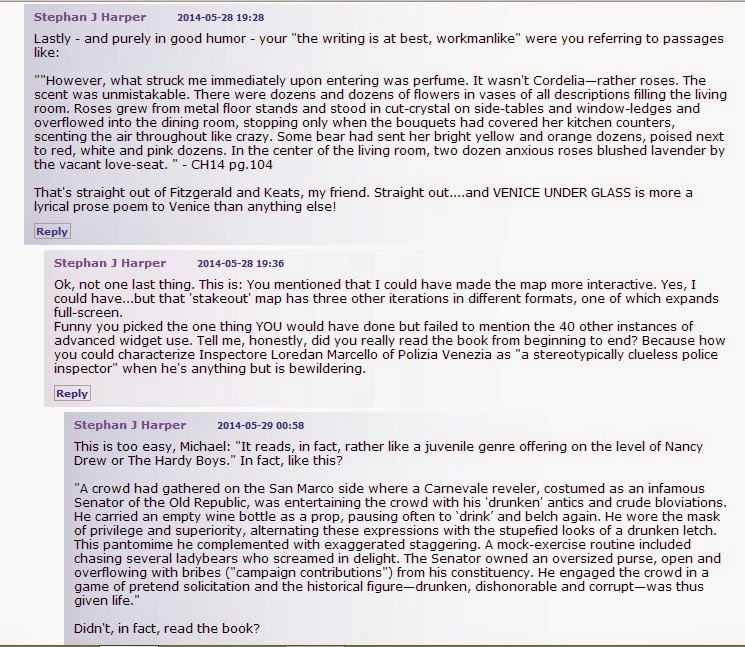 I love Harper's use of 'lastly' and 'one last thing' then posting, what, twenty more comments.

Posted by Surprises Aplenty at 7:45 PM No comments:

I gotta tell you right away that this is a different Brian Dean and I am promoting it purely due to the shared name.  But if you are in San Fran, you might want to check it out.  His photography exhibit is here:

An image from the latter link:

Best of luck, Brian Dean!
Posted by Surprises Aplenty at 6:06 AM No comments: