The Brave Pantser - or not

At Quora, I wrote about some of my Nanowrimo experiences. Here is most of my answer at Quora:

For "pantser" writers: do you find the process fun?

Yes, most of the time.

A Nanowrimo story was set in space and I knew the setting very well; someone else had researched it and I thought it cool. I contacted the man for permission to put a story in his setting and he was happy to grant that permission. The setting was:

Building the ultimate Solar System
A while back I performed an experiment called build a better Solar System.  The game was to make better use of the Solar System’s habitable real estate.  In the game I was required to keep al…
https://planetplanet.net/2014/05/13/building-the-ultimate-solar-system/

36 Earth-sized moons and planets around a single star.

So someone else did most of the physics and I only needed to come up with the characters, plot, themes and tone. That’s all!

Okay, that’s a lot. But my story had a firm setting. So I sat down at 11:55pm on October 31, got ready and… really struggled at the start of November 1!

I wrote about some archaeologists and a university on one of the planets and then the story began to pick up momentum.

Nanowrimo only requires 50,000 toward a first draft be written by November 30, and I surpassed that number but I had nothing like a story.

I did have the actual beginnings of a story, I had solid characters, a satisfactory plot - not so much on the page but in my head or in notes about the story. I had, in short, the makings of a good (for me) story; probably not a first draft, but draft 0.6. Most of that work would be thrown out or kept as background in the actual story, but I had pantsed my way into an actual story.

And I learned so much about my science fictional setting. It was indeed fun. Not completely satisfying because it took so long in my writing for the story to appear, but still fun.

One more story about pantsing a story: I wrote a fantasy story based on some daydreams I had as a child (yes, in writing this, I see how much time I spent daydreaming. I had better become a real writer to make that time well-spent!). It had a child stolen from another world and then returned to that world after several years had passed - standard stuff. But because I was pantsing the story, I didn’t know yet why she had been taken or why she had been returned.

And at several points in the story, I could have made that choice, directed the story one way or another … and I chickened out! At every opportunity to make a decision, I passed and left it vague so I could make the decision later.

And the story was fluff. It had not meat. It wasn’t good and my anxiety about making, or not, that decision kinda poisoned the process for me. There were fun moments but the total was not fun. I needed to be a braver pantser.

Posted by Surprises Aplenty at 7:12 AM No comments:

@skerples1 offered a 'generic fantasy map' and others joined in with more in the comments.

As is my standard practice, the images shown here have been cropped and shrunk. To see the full images at full size, follow the links: 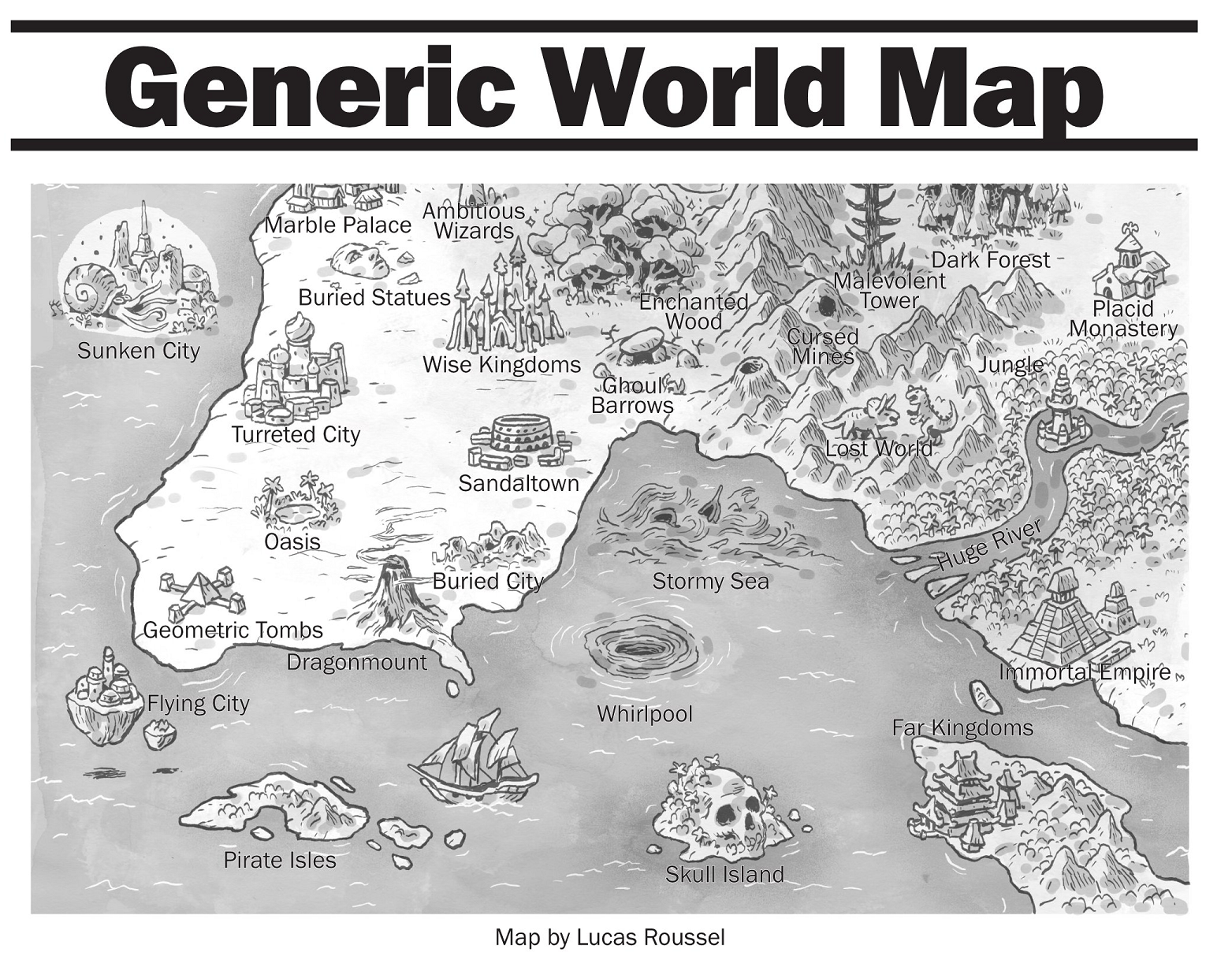 And more from Skerples: 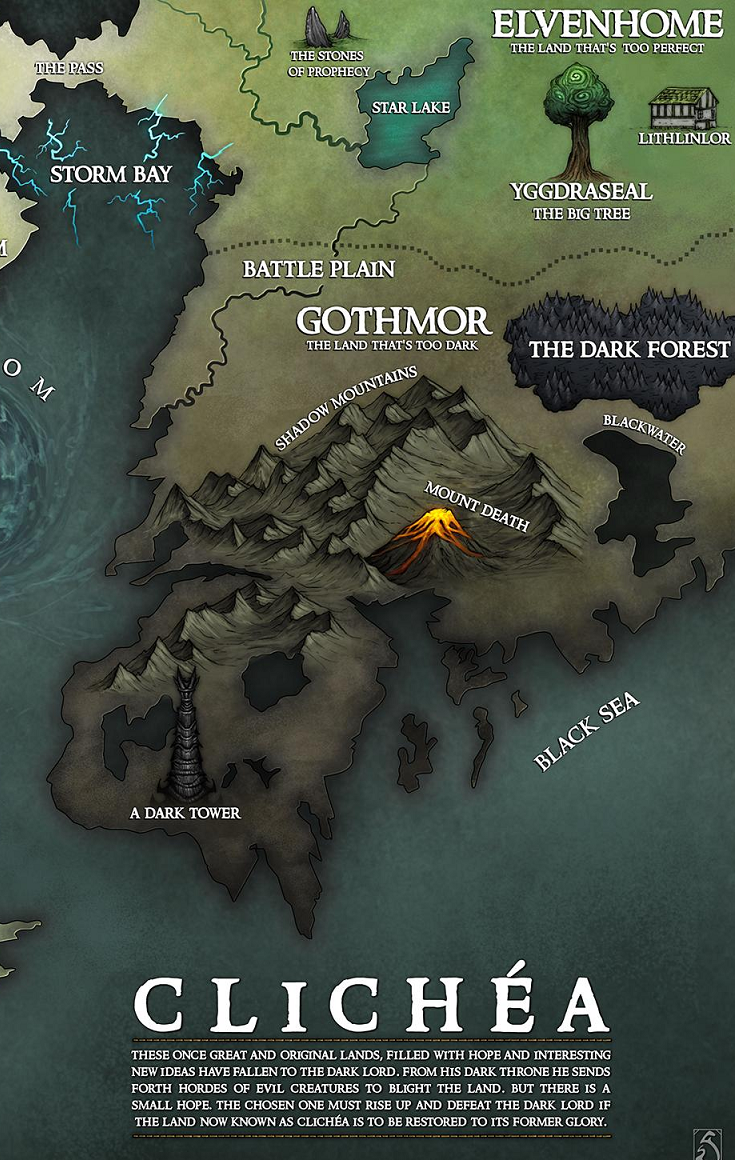 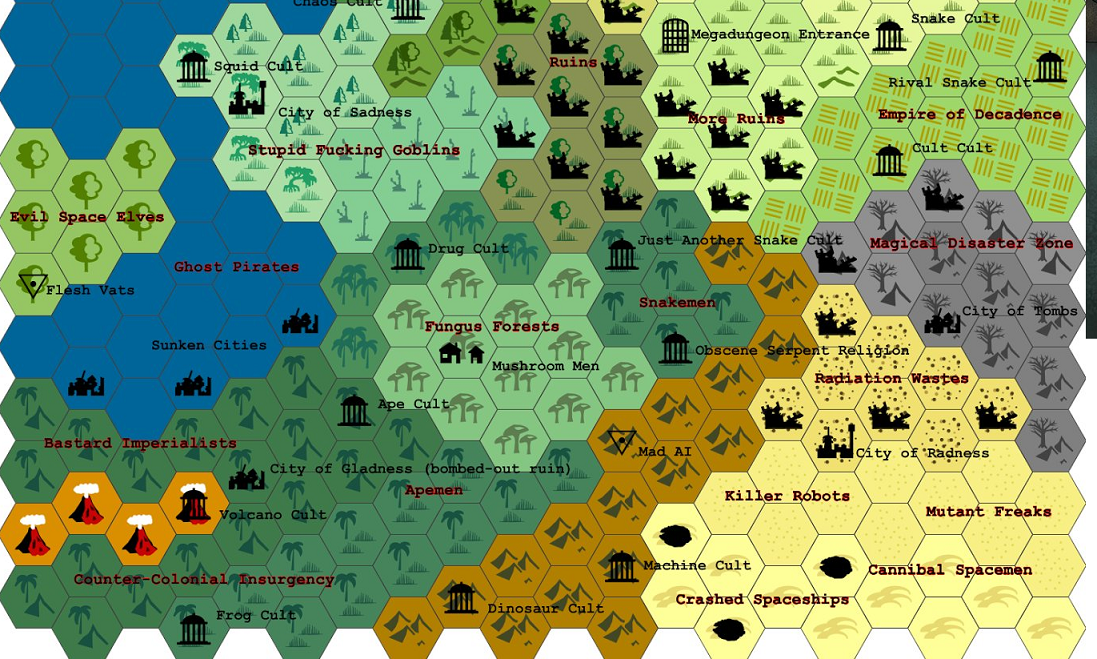 Ash, the Loom of Doom, offered And more. There are all fun and maybe they remind us of how many cliches there are out there.

Posted by Surprises Aplenty at 6:47 AM No comments: